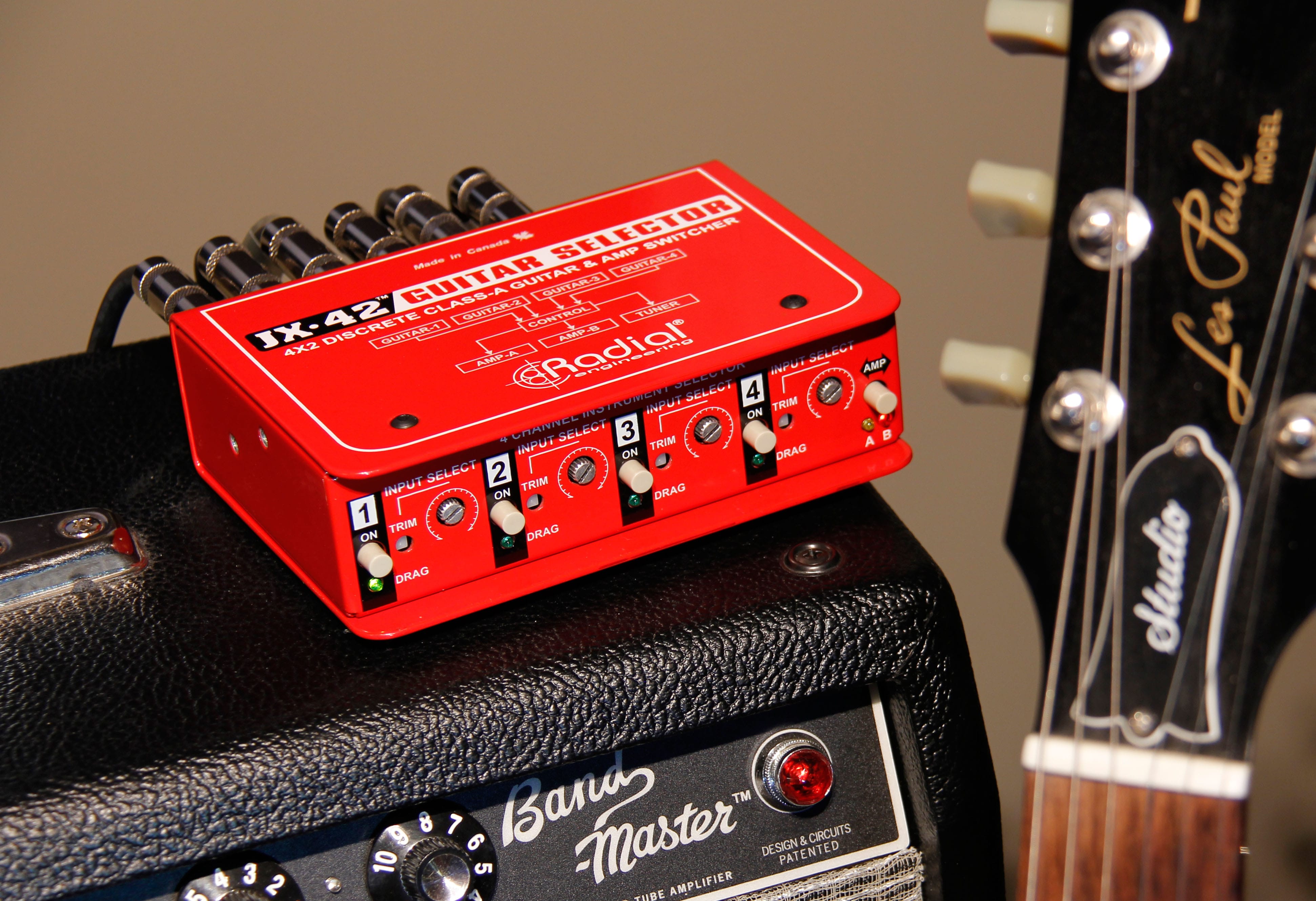 The JX42 is used to matrix four guitars and two amps in the studio or on a live stage. According to Radial TSG (Technical Support Group) Advisor Ryan Juchnowski: “Ever since we launched the JX44 Air Control guitar and amp switcher, we have received numerous requests to build a smaller, more affordable version. The JX42 is exactly that. It can handle up to four guitars and switch between two amps using the optional JR2 remote control. At only $349.99 USD it will surely become a favorite for backline techs everywhere!”

Made from 14 gauge steel, this compact switcher begins with Radial’s trademark bookend design. This creates a protective zone around the switches and knobs to safeguard against the harsh environment of professional touring. The unique I-Beam construction adds tremendous rigidity to protect the internal circuit board from torque which could lead to premature cold solder joints. Optional rack ears allow one or two JX42s to be rack-mounted in a single 19″ rack space.

Starting with the front panel, the four (4) input channels feature ‘radio-style’ on-off switches that immediately turn the previous channel off when the new channel is selected. These are complimented with easy-to-see LEDs for visual feedback on dark stages. Switching is done using opto-resistive couplers that ramp up and down the signal, eliminating any popping that could otherwise occur. This is particularly important when mating the JX42 with high gain amps and concert-level PA systems. Inside, Radial’s award-winning 100% discrete class-A buffering circuit is employed to ensure absolute signal quality is maintained. Each input channel also sports a dual function ‘set and forget’ potentiometer that can be assigned as either a level control to match various active or passive guitar or bass signals, or can be set to ‘Drag’ for precise load correction when using passive magnetic pickups. Drag™ control replicates the tone and feel as if connected directly to a guitar amp. The potentiometers are recessed in order to leave the front panel clear of obstructions so that they are not accidentally changed during a busy concert.

Connection to the JX42 is done using standard ¼” guitar jacks via the rear panel. Each input is accompanied by a dedicated thru output that allows the guitarist to mate a particular guitar with a specific amp or SGI extender to feed a distant pedalboard. When used with bass, the thru can be used to feed a Radial direct box to send a clean signal to the FOH position. There are two main stage amp outputs, of which the B output is transformer isolated to eliminate hum and buzz caused by ground loops. In addition to the front panel switches, instrument selection may be accomplished via an optional JR5 foot switch or the new MR5 midi translator. Selecting the amps may be done using a front panel AB selector switch or by connecting the optional JR2 remote footswitch via a TRS jack. Once connected, the JR2 derives its power from the JX42 which illuminates the AB select and mute LEDs. A dedicated tuner out mates with the mute footswitch for quiet on-stage tuning.

The JX42 is powered via a 15VDC supply for extra headroom which can be locked to secure the cable. Proudly made in Canada, the Radial JX42 carries a MAP price of $349.99 USD.

Read more about the JX42 here