Performing Live Without a Guitar Amp 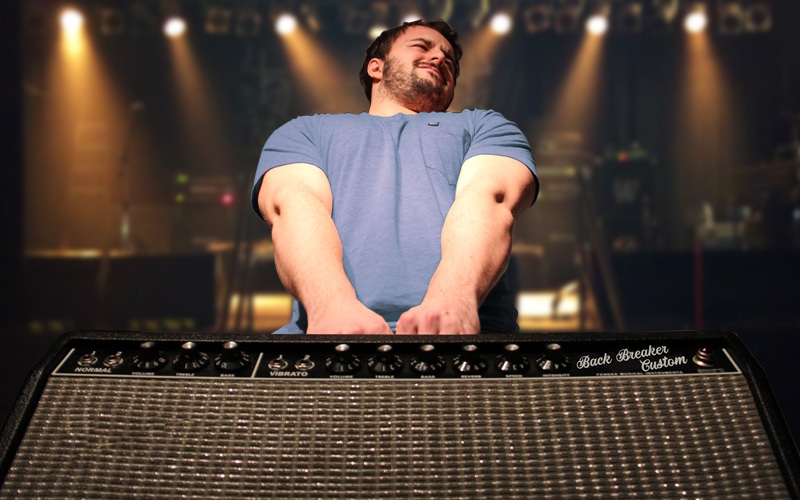 There is no denying that playing a 100 watt Marshall® stack is like having the power of Hercules at your fingertips. It is an exhilarating and heart-pounding thrill that all guitar players need to experience at one point or another over their playing careers.

There is however a flip side to the ethereal bliss that is only experienced by the most practiced musicians: someone has to carry the amp to the gig!  Getting the amp into the van is often the easy part. You arrive at the gig only to discover that you are faced with a series of stairs in which to practice your Herculean-like physical prowess and a dark, narrow hallway that makes navigating to the stage an exhausting act. Then, at the end of the gig—where are those roadies anyway?—you have to lug your amp back down the stairs at 2:00 in the morning after your car has just been dumped on with 6” of snow. It’s no fun. The next day, you wake up with coffee and ibuprofen tablet to deal with your back pain and ask yourself that all-important question: “Was it worth carrying the amp to the gig? The stage was so small, we could hardly move, I barely had any room for my amp, let alone place it in an optimal position. Is there not a better way?”

What options do you have instead of taking the amp to the gig? The first is trading-in your amp and pedals for a brand-new setup using digital modeling technology. Although for some this works just fine, for many the digital interface introduces a disconnect that gets in the way of playing.  An electric guitar is a magical beast that becomes one with the player. It is analog. It is about feel. Your fingers connect to the strings, which in turn connect to the pickups, amplifier and speakers. There is no latency, there are no digital steps or sample rate conversions in between you and your sound. You become one with your instrument.

The second option is connecting your guitar to your pedals and then sending the signal to the PA system via a direct box. This way you can use the stage monitors as your amp and allow the front of house engineer to manage the sound in the room. In theory, this works. However, in practice a different story emerges. A guitar amplifier is made up of three components: the preamp, the power amp and the loudspeaker. These are voiced to work as a single unit and the sound from the amp is filtered by the limited bandwidth of the speaker to accentuate the midrange. A high quality direct box is designed to pass the guitar signal through without coloring your tone. A PA system or wedge monitor differs greatly from a guitar amp. These devices are full-range speaker cabinets that are designed to deliver a full bandwidth from the lowest bass to the highest harmonics. When you connect your guitar and pedals to the PA system the sound that is produced is dreadful and often characterized as a similar to that of a bag of angry bees! The problem is that you have no filter (ie guitar amp speaker) to shape the sound of the pedals so that it sounds like a guitar amp.

The Tonebone JDX Direct-Drive™ was envisioned as a solution to solve this very real problem. The design stems from the popular Radial JDX-48™ speaker cabinet direct box. The JDX-48 can be found on stages around the globe with artists as diverse as Megadeth, Arcade Fire and Rascal Flatts. The JDX-48 is a reactive device that captures both the sound from the head and the back electro-magnetic force from the loudspeaker. It then passes the signal through a series of filters to emulate the sound of a 4×12 half-stack that has been mic’d with a Shure® SM57™. It is not perfect, but it is very convincing. Best of all, it delivers a consistent tone night after night that is void of variables such as mic placement, room acoustics or stage resonance.

The JDX-48 and the JDX Direct-Drive differ whereby the JDX-48 connects to the high-power output of a guitar amp (100 watts) while the JDX Direct-Drive connects to the low output from a pedalboard (less than 1/10th of a watt). The JDX Direct-Drive has five guitar amp voicings that act like filters to sound like you are performing through a guitar amp. The first is the original JDX-48 tone. The second emulates the beefier sound of a full-size Marshall® stack. This can be tailored with a bright switch that is akin to the presence switch on an amp. The fourth is a setting the emulates the tone of an open back amp like a Fender® Twin. It too can be set with the bright switch should this be needed. You simply connect your guitar to your pedalboard, the pedalboard to the JDX Direct-Drive and then send the balanced XLR out from the JDX Direct-Drive to the PA system. Like the JDX-48, the tone is very convincing. Best of all. It is 100% analog! This lets you retain the feel of your guitar just like playing through your regular guitar amp.

The JDX Direct-Drive is also equipped with a number of extra outputs: there is a ‘thru’ (dry-uncolored) output that can be used to feed your guitar directly to your stage amp. This lets you combine a mic’d signal from your amp with the JDX Direct-Drive to get the best of both worlds. You can also use this output to feed a direct box if you are recording the concert. This dry track can then be used for Reamping should you need to fly-in a note or change the guitar amp tone when mixing. There is a processed (wet) output that can be used to drive a separate power amp or active speaker on stage. There is also a separately buffered tuner out that is always on that will not interfere with your tone by loading down the pickups or introducing clocking noise that can sometimes be audible with digital tuners.

Since the JDX Direct-Drive does not make any sound (no speaker), it works great in situations where stage volume must be kept to a minimum. Because of its size, you can have it ready in your gig bag should a last-minute gig at a coffee house come up.

The Tonebone JDX Direct-Drive is a small wonder that sounds huge and it will not hurt your back when loading in or out from the gig!