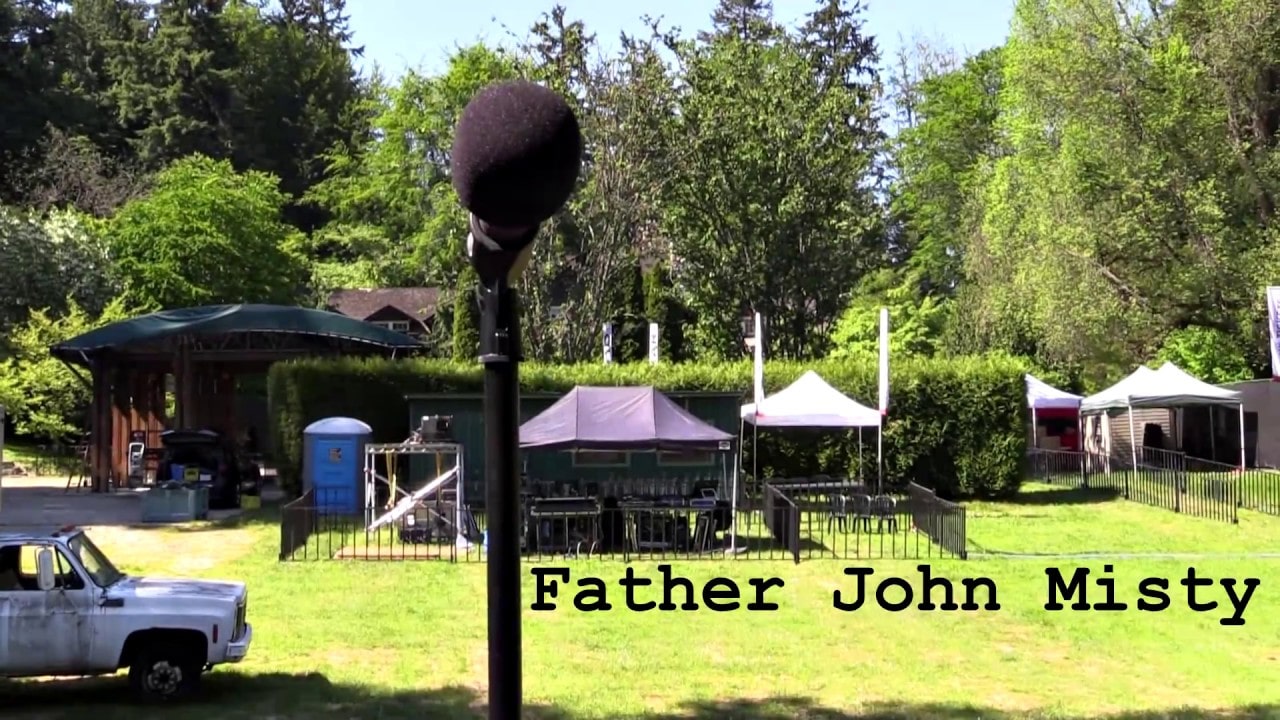 Prior to our visit, the Misty crew had requested a few pieces of Radial gear which included the new Key-Largo™ keyboard mixer. The keyboardist, Kyle Flynn, needed a more robust device than what he currently had to adjust the volume of his three keyboards and plethora of guitar pedals that were on a stand directly above his Mellotron.

The only problem: there had been a power outage right before we showed up.

It actually turned out OK! While we made our way around the darkened stage, checking out the loads of Radial gear the band uses, we were serenaded by Josh Tillman (Father John Misty) and his band as they acoustically practiced (aka: soundcheck when there is no power) on a grassy knoll a little ways away.

While exploring with Front Of House engineer Trevor Spencer and Monitor engineer Ryan Doordan, we saw JDI™ Stereos and Duplexes were being used on their vintage keyboards, a JDI was on Tillman’s acoustic pedalboard, an active J48™ was hooked up to a Lapsteel guitar, a Pro-D2™ on the electric drum pads and an older JDX was being used on the bass amp. They had also ordered a new JDX48™ to replace this, as the new revision of the pedal features the Bass Extension for deeper low frequencies and the option to plug into 300 watt amps.

We noticed they were not using any backing-tracks which is rather rare in this age of stadium touring. Instead, the band featured an impressive 6 piece string section, a 3 part brass section, 3 multi-instrumentalists, a bassist and Josh, who often played acoustic guitar during the set. Trevor insisted that they would likely never resort to using tracks.

Once the power came on and the concert (fortunately) began, it became clear why. Even without a soundcheck, Trevor Spencer did an excellent job of balancing all the sounds of the vintage instruments, which were masterfully played arrangements that added excitement to the studio recordings. All the while, Josh’s voice sat perfectly clear over the ensemble, allowing his cynical yet clever lyrics to be heard.

While the concert went on flawlessly as the warm sun set, Tillman admitted that the night was “almost a shit-show” due to the power outage and unfortunately since the concert started late, a few songs had to be cut early.

Before playing the “spontaneous” encore, Josh apologized: “One of the problems of living on an electric grid is that sometimes you have to miss a few minutes of a folk-rock concert.”

Thanks to Trevor, Ryan and Tom for taking the time to talk with us and check out some new Radial gear!