What is a direct box anyway?

A direct box is an impedance matching and signal-balancing device. DIs convert hi-impedance instrument signals to mic-level balanced lines for interface with pro-audio equipment such as mixing consoles. A good direct box will ensure proper electrical signals are maintained throughout the signal chain and allow long cable runs without added noise. A good DI box is just as important as a good microphone.

What is the difference between an active and passive DI?

This is somewhat similar to comparing dynamic mics to condensers. Active DIs have a built-in pre-amp that requires power to run while passive DI’s use a transformer to convert the signal. Both ‘transform’ or convert the instrument’s high-impedance output to a low impedance balanced microphone level. This allows long cable runs without adding unwanted noise and will improve the instrument’s sound quality. The J48 uses phantom power to derive its power source.

What is phantom power and will it harm my other equipment?

Phantom power is a 48 Volt DC supply that comes from the mixing console on pins 1 and 2 of the XLR connector. It was originally designed to provide power to condenser microphones. It is usually 48 volts and between 5 and 15 mA. Most equipment used in pro-audio today is designed to interface when phantom is on. As such, phantom power will generally not harm your equipment.

Why do people use active direct boxes?

Years ago, most bass guitars used regular output pick-ups such as those found on Fender basses. Musicians found that connecting the bass ‘thru’ a direct box and then splitting the signal to their amplifier caused the sound to change. This was caused by the added load of the direct box driving the signal to the mixer (and cable) that could be as far as 300 feet (100 meters) away. This would reduce the level going to the amplifier and change the tone.

Back in the 1970s and 1980s, acoustic guitars did not have the sophisticated pick-ups and built-in pre-amps that are standard today. Electric basses now incorporate high-output pick-ups or have active electronics built in. Digital keyboards and synthesizers have high output levels. These are so powerful that loading is no longer a concern. This ‘fix’ has in fact caused a new problem: input distortion or saturation. Most DIs cannot handle the high levels of today’s hotter instruments.

What makes the Radial J48 so special?

Let’s begin by understanding how active DI’s work: Active direct boxes are in fact unity gain preamplifiers. They drive the instrument’s signal using what are known as buffers. This means that active direct boxes require power to run. As such, they must either get their power from batteries or phantom power from the console.

For the direct box to work properly, the batteries must be fresh. As soon as the power is low, the direct box will distort. This is why engineers hate batteries, and prefer phantom power. But phantom has limitations…

Phantom power was originally developed to supply low-current condenser microphones. Back then, no one ever figured that we would have to manage the dynamic levels of today’s high-output active instruments. We recently tested a Takamine acoustic guitar with built-in pre-amp and found that when pushed to the max, the output peaked at 7 volts. Considering that most DIs can barely manage 2 to 3 volts, it’s no wonder guitars often sound harsh in a PA system. Active basses push the DIs further due to their powerful low frequency content and digital pianos are even more demanding.

The Radial J48 was specifically designed to solve this problem by boosting the internal rail voltage so that these instruments would not be able to overload the input. The J48 can be hit with as much as 9 volts and still sound great! This is called headroom.

Why does the LED not stay on?

We felt that every milliwatt of available power should be diverted to the audio signal path and provide maximum sound quality. Since phantom power has very little available current, we felt that lighting up an LED that requires almost as much current as the whole J48 circuit would not be wise. For the most part, direct boxes tend to be placed under keyboard racks or behind amplifiers and you can’t see the light anyway.

Why do people use passive direct boxes?

Passive direct boxes are often chosen as they are ‘plug & play’ easy to use. When equipped with a high quality transformer, they can handle exceptionally high signal levels without harmonic distortion. A good one like the Radial JDI will process the signal without introducing artifacts such as phase distortion. This is achieved because the Jensen® transformer we use is extremely well made.

What is phase distortion?

Keeping your signal in-phase is akin to making sure that when you play guitar, the sound coming from the low E string plays at the same time as the G string when it comes out of your amp. You may take this for granted but the fact is, phase distortion can cause an instrument to get lost in the mix and make a bass sound muddy. Phase distortion can occur at all frequencies but is most noticeable in the bass or low frequencies. Try facing your stereo speakers close together and reverse the wires on one cabinet so that it is wired ‘out of phase’ and you will immediately become an ‘in-phase disciple’.

When we tested several popular direct boxes, we found that most were fine at 1kHz. What surprised us is how they performed at 20Hz from absolute phase. One popular box was 40° out of phase, while another was 20° out. The best was the Radial JDI™ at a mere 4° while the J48 comes in at a very respectable 9°. We spend thousands of dollars on PA systems to ensure they are time aligned (in phase) while lesser direct boxes ruin the sound even before it gets to the mix position!

Is a flat frequency response better than a colored response?

This is a good question. When buying a large diaphragm condenser microphone, you are not getting a flat mic, but getting a color or flavor for your sound palette. Most studios boast a selection of mics and the sign of a good engineer is ‘knowing’ which mic to use on what in order to get a particular tone. With direct boxes, it is usually not the case. If the sound of the guitar is not right, one will usually change the guitar not the direct box. Therefore, we believe the role of the direct box is to transport the original signal as faithfully as possible from the instrument to the destination and allow the engineer and producer to make the artistic choices.

Here’s more food for thought… Should the direct box manufacturer change the tone? If it makes your Strat sound fat, will it make your Les Paul muddy? We think a properly designed DI should be faithful to the source. The Radial J48 direct box is natural and uncolored.

What about tube direct boxes?

Tube direct boxes are cool and there is a definite place for them in the recording world. Tube DIs introduce personality to the sound and should be viewed in the same way as one views a large diaphragm microphone.

Can I use the Radial J48 for re-amping?

Re-amping is a two stage process. The Radial J48 is the perfect ‘start point’ for re-amping where you can connect your guitar, send the thru to your amp and the XLR out to the recording system. You will then need a device like the ProRMP or the X-Amp for re-amping. These take the dry recorded signal and send it back to the guitar amp and effects to complete the re-amping process.

Can I use the Radial J48 with a piezo pickup?

You could but it may not sound great. The problem with Piezo pickups is that they sound best when they ‘see’ a high input impedance. For piezos, you really want to be around 4meg-ohms or higher. The Radial JDV and Radial PZ-Pre are specifically designed for this.

Can the Radial J48 be used on keyboards?

Yes of course. For older Rhodes pianos or synthesizers it is perfect. You will likely need to use the pad to control the level as many keyboards today have super hot outputs.

What makes the J48 better than the rest?

A good direct box needs to address several facets to be functional: The sound, the feature-set and construction are all essential parts that make up the whole. Let’s start with the construction. The Radial J48 is in fact two boxes in one. The inner skeleton features a 14-guage welded construction in which the PC board, circuit, transformer and switches are housed. Pick up the J48 and you know you are dealing with quality. The rigid design ensures that there will not be any stress on the PC board and the solder joints will remain intact even after years of use. The outer book-end design provides easy access to the connectors while creating a natural protective zone for the switches. In the real world of concert touring, DI boxes are stepped on and abused. Radial direct boxes must be able to stand up to the abuse. No other DI box offers as many features. This makes the J48 practical in pretty much any application. Finally, the sound of the J48 is ‘not’. Check out the specification and you will find that it is extremely linear from 20Hz to 20kHz, it exhibits almost no distortion in the most rigorous and demanding 20Hz region and with extremely low phase distortion throughout the audio bandwidth, what you put in – you get out. Nothing added, nothing changed.

Why choose a Radial direct box?

Passion and quality. We believe that today, what is missing in many products is a passion to build the product right. We are passionate about producing products that not only exceed the sonic norms, but also exceed the durability expectations.

How does the merge function work?

The merge is a passive resistive mix circuit that sums two input channels to mono. In other words, it takes the left and right outputs from a keyboard and mixes them together using the in and thru connections on the DI box.

Will the Thru output of the J48 provide signal if the unit does not receive phantom power?

Yes, the Thru will continue to mirror the input signal even when phantom power is not on. Just make sure the Merge function is not turned on.

Traditionally a 1 meg-ohm input has been used on amplifiers and DI boxes, as it was the standard on TUBE amps. Back in 2001, we discovered that a 1 meg load on a tube circuit sounds very different than it does on a solid state circuit. This is likely why so many players dislike solid state gear! We noticed that when given a choice, 220k tends to be the choice that most players prefer with solid state direct boxes. Because of this, we set the input impedance of the J48 and Pro48™ at 220k.

Is there is any reason not to use the merge function on the J48 or the JDI DI boxes so that I can use two different guitars for each input?

You can certainly use two instruments without a problem. The only issue here is that each one may produce a slightly higher output. 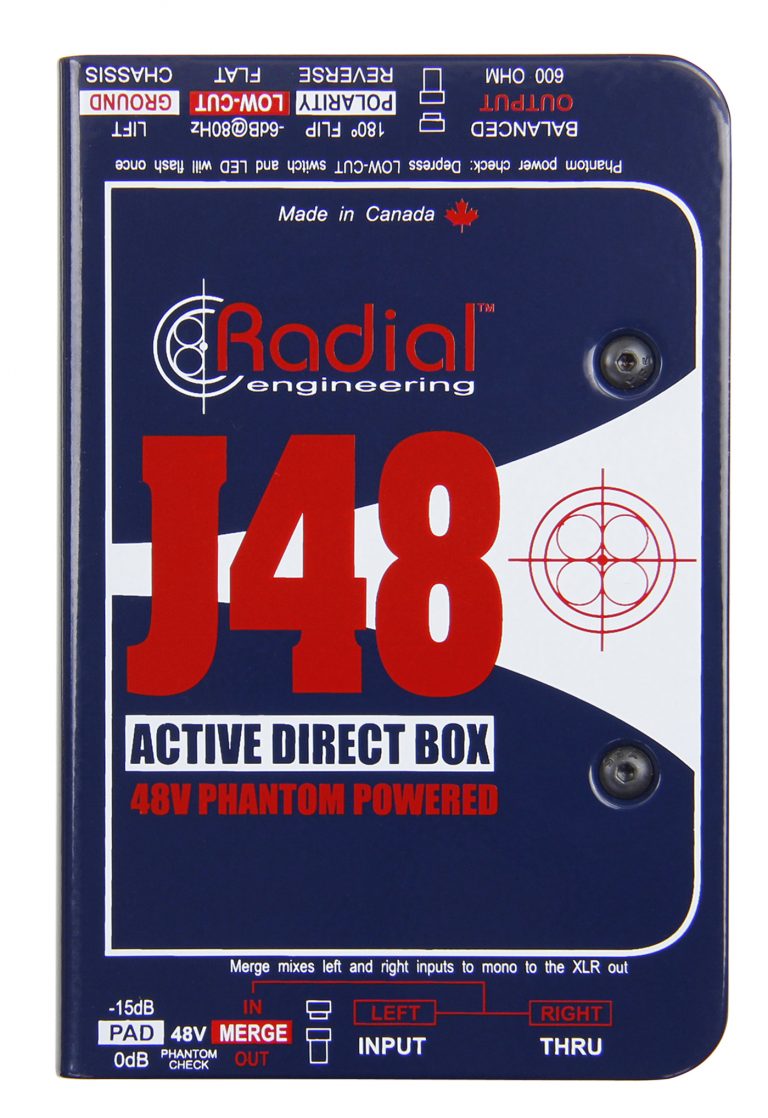 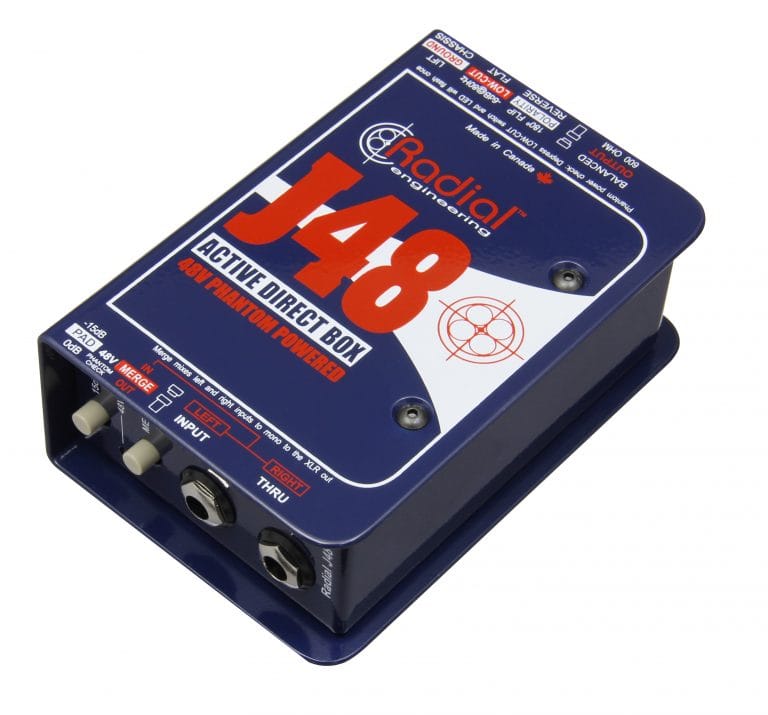 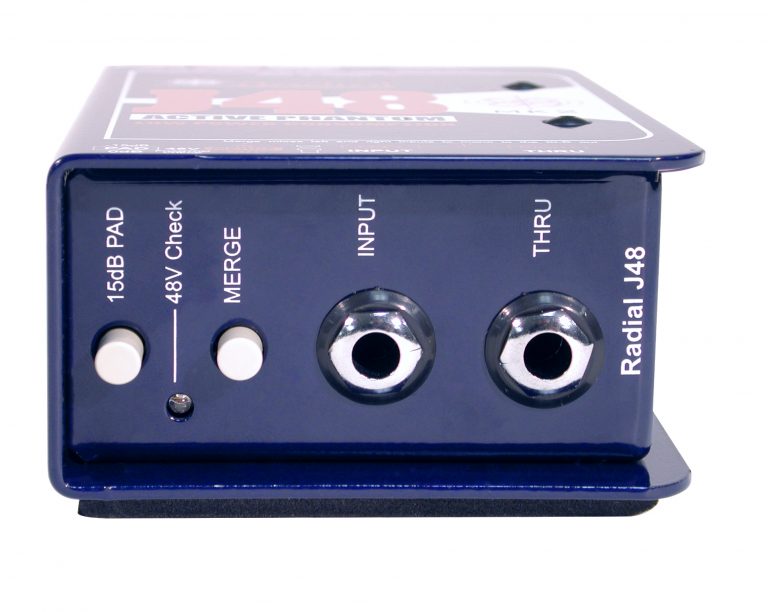 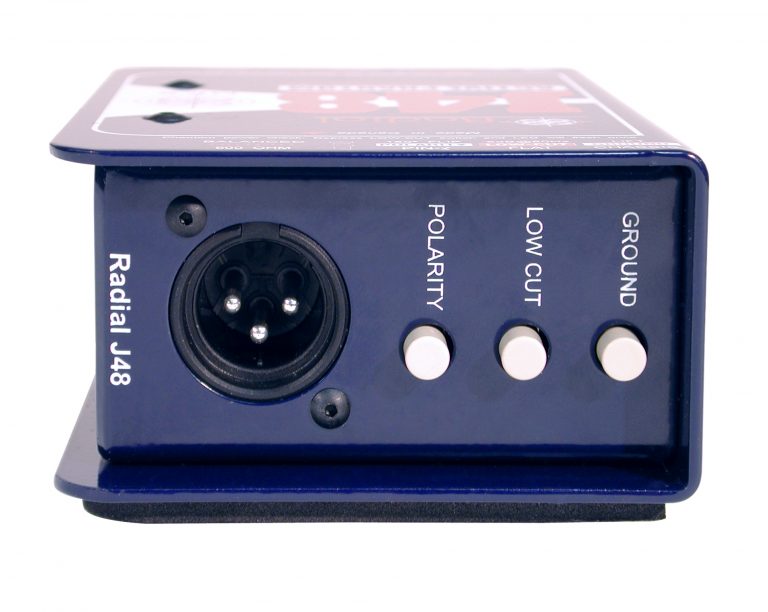 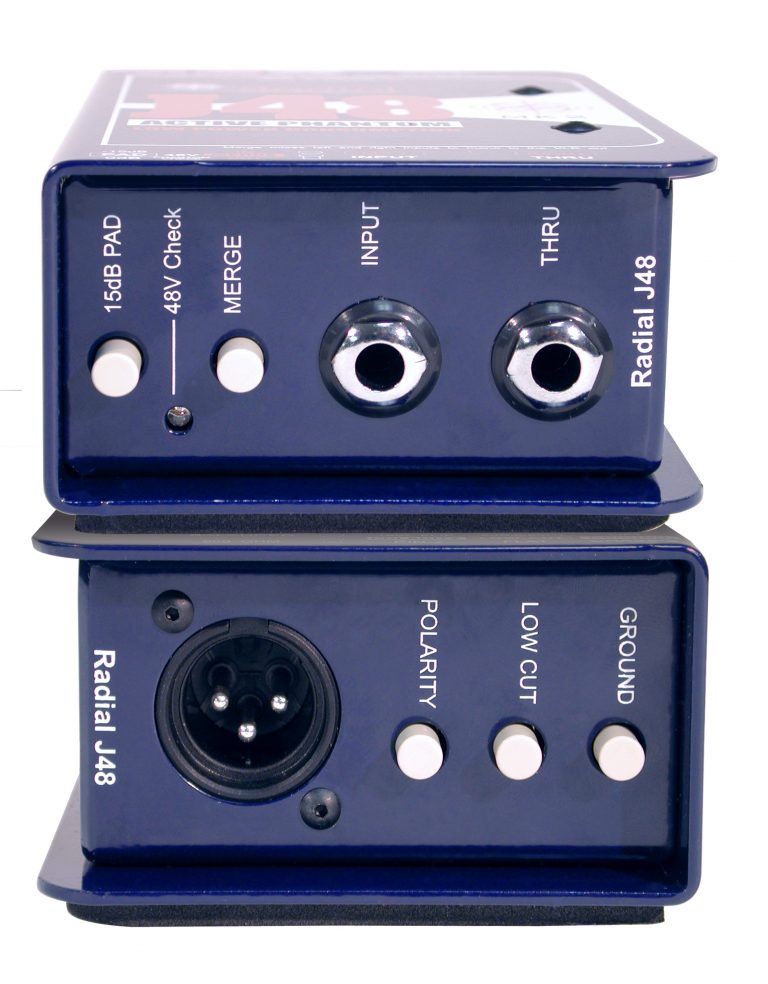 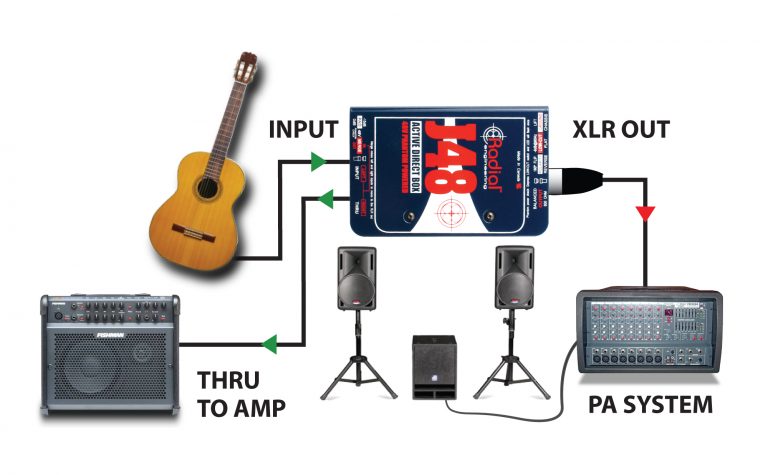 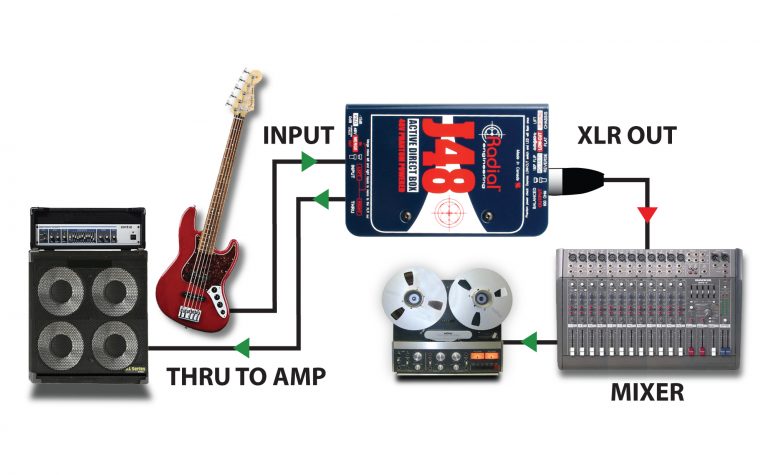 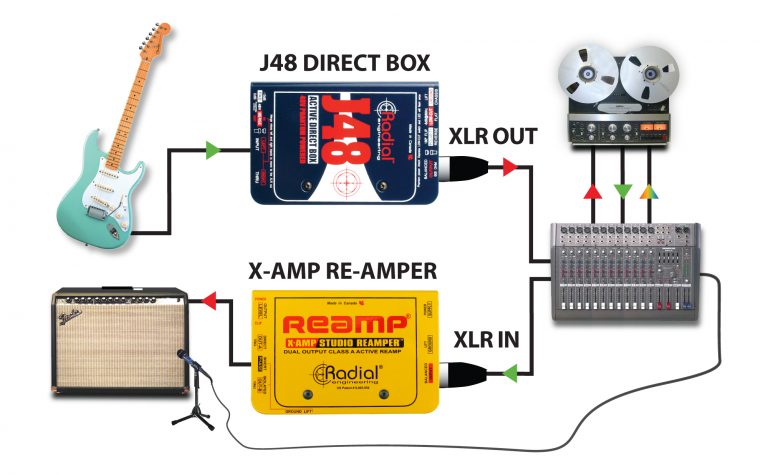 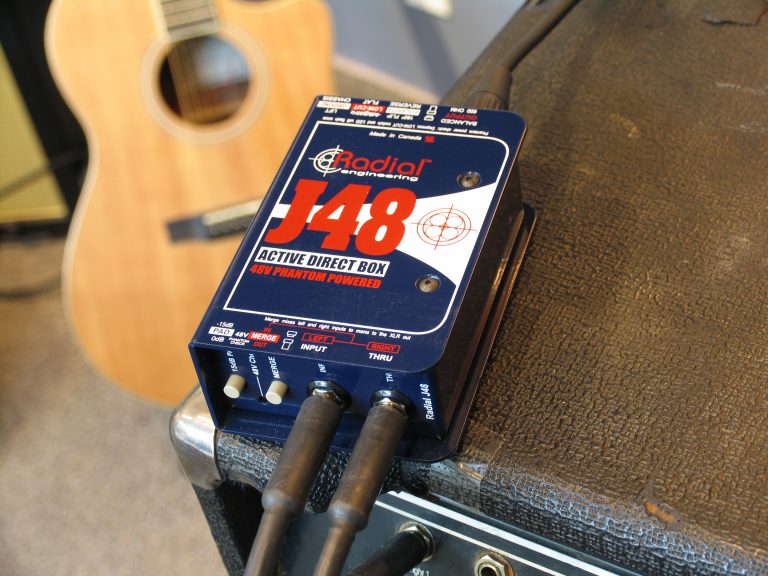 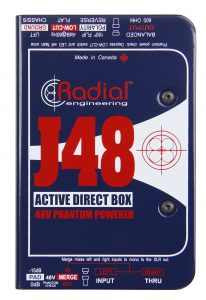 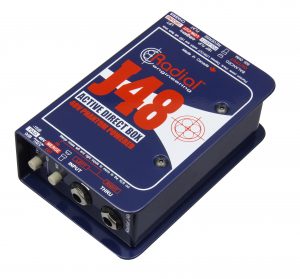 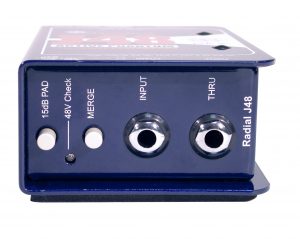 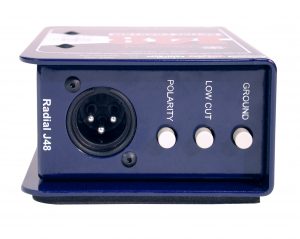 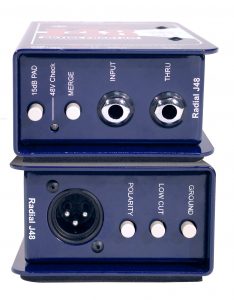 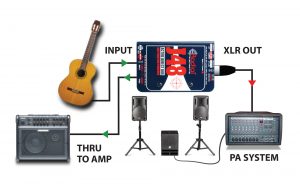 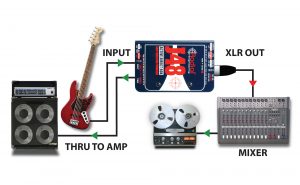 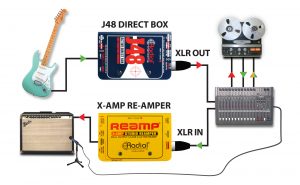 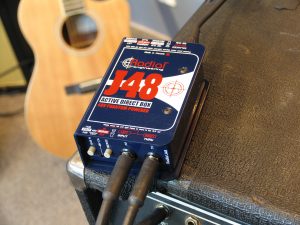