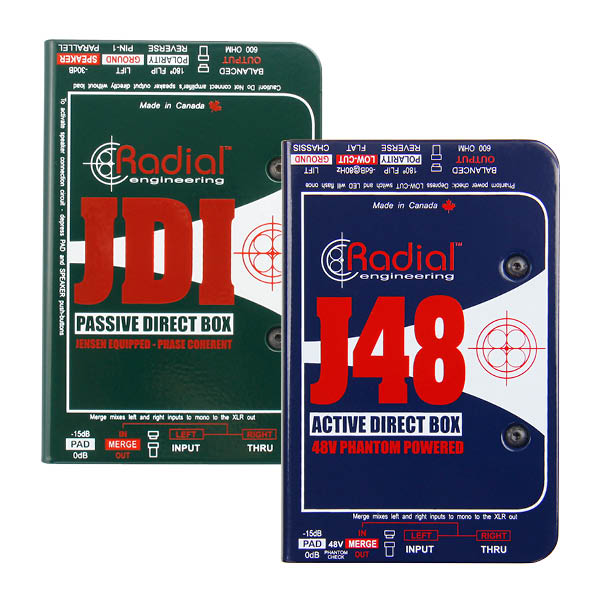 The direct box is a device that has been around for nearly 50 years, but only recently have folks begun to really pay attention to how they work or which type will do the best job for a given task. At Radial we pride ourselves in making a wide variety of DI boxes to suit every budget and application.

When comparing passive DI boxes, begin by considering the instrument or audio source, the number of channels required for a particular setup and the feature set. You will find that most passive DIs share features such as an input pad and a ground lift. All Radial DIs have built-in filters to reduce parasitic noise caused by magnetic fields and radio frequency waves.

The primary difference between the various models is the type of transformer that is employed. We spend hours listening to various transformers to find the best one for a given application and price point. For instance, the industry-standard Radial JDI employs a USA-made nickel core transformer with dual Faraday shields and a MuMETAL® external can. MuMETAL® provides upwards to 10,000 times greater shielding than aluminum. This combined with the steel outer shell protects the sensitive high impedance signal from outside magnetic fields from power transformers that can pollute the signal.

While the industry standard Radial JDI and JDI Stereo are primarily intended for use with instruments such as bass, acoustic guitar and keyboards, the two-channel Radial Duplex adds greater connectivity for AV applications where you may need to connect to CD players, video machines, or any device with consumer-type output connections. The same follows with respect when looking at the Radial Pro series. If you are using the DI in a live situation and the PA system is band-limited up to 18kHz, you may find that the ProDI will work perfectly well. If on the other hand, you are recording in the studio you may want to capture the very highest harmonics, the JDI would be a better choice. The Radial JDI is used by Tony Levin, and The Who while the Pro series DIs like the ProD8 are used by U2, Rush, and the Rolling Stones.

Radial produces a number of active DI boxes to address various requirements. Selecting some, such as the J33 for a turntable, is easy… while choosing between others can be confusing. This section aims to simplify the process by bringing various active DI boxes together for comparison.

For the most part, active DI boxes are employed on low-output, passive instruments. Like condenser microphones, active DIs tend to have more reach over passive, transformer-based counterparts due to the sensitivity of the input. But as with all amplifiers (an active DI box is in fact an amplifier of sorts) these can distort if the input exceeds the available headroom. More headroom can be achieved by increasing the size, or power generated, by the supply. For instance, a DI box like the JDV employs a 15 volt, 500 milliamp power supply that has incredible headroom, but it needs to be locally powered. This may not be convenient on a live stage. Thus the reason most live engineers prefer to use an active DI box that derives its power from the 48 volt phantom power generated by the mixing console. Phantom power typically generates 48 volts, but only offers 5 to 10 milliamps of current. Innovative powering schemes such as the one employed inside the Radial J48 elevate the headroom to an acceptable level. This enables most instruments to be connected without fear of distortion and is likely the reason the J48 is used on the biggest stages by the biggest acts around the globe.

The J48 and Pro48 are primarily designed for live stages. These employ similar audio signal paths and derive their power from 48V phantom. The Pro48 is basically a trimmed down version that eliminates the stereo to mono merge function, polarity flip, and high pass filter while reducing the size. This enables us to reduce the price to make it more affordable. 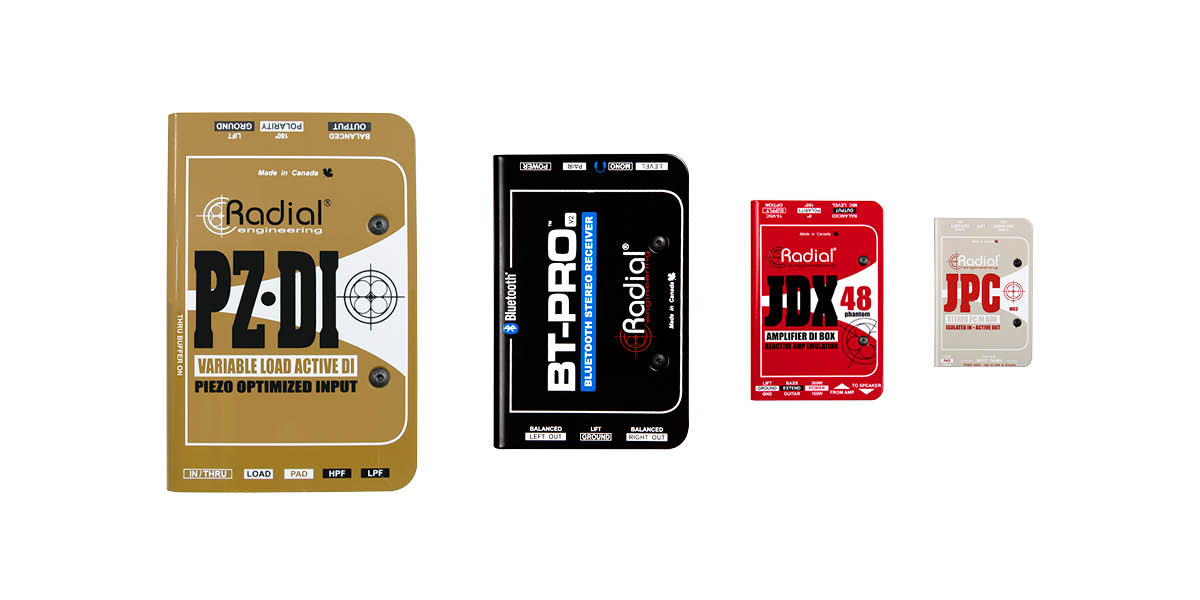 Today, the use of computers is omnipresent in the audio world. Computers are used to create sound files to back up the band’s performance, to play back videos and for walk-in and walk-out music during a concert. The problem with computers is that they are often the cause of buzz and hum in audio systems.

Radial produces a variety of solutions for computers, sound cards and consumer music players. These are broken down into two groups, one being passive, the other active. Many stage techs prefer passive DIs like the ProAv2 as they do not require power and the transformer isolation benefits by eliminating stray DC currents which in turn can cause hum and buzz on the audio line. Active DIs benefit by enabling the electronic designer to add features such as buffers for additional gain and blocking capacitors which can filter out noise without affecting the audio signal path.

These devices take digital audio inputs and provide high-quality analog outputs for connection to professional recording equipment. Audio over USB, Bluetooth, or the Dante network protocol are all supported.

Connect directly to the output of your amplifier to impart the tone of the amp on the direct track, or bypass the speaker cabinet entirely with the Headload load box.

Most string players tend to use a piezo pickup that mounts directly on the bridge of a violin, viola or upright bass. Although piezo manufacturers rarely publish the optimal impedance for their device, piezo transducers sound fuller, warmer and less peaky when they are connected to a very high input impedance. So if you are looking to produce the most natural sound of the instrument, a high input impedance in the range of 5 to 10 meg ohms is ideal. Radial offers several products that meet this criteria.

The difference between these four products comes down to controls and features. For example, the StageBug SB4 is very basic with an input and two buffered outputs to feed the stage amp and the PA system. The PZ-DI takes this up a step by providing a variable low cut filter for precise low frequency control. The AC-Driver adds simple EQ controls while the PZ-Pro gives you a second channel for another instrument plus an effects loop and power booster for soloing. 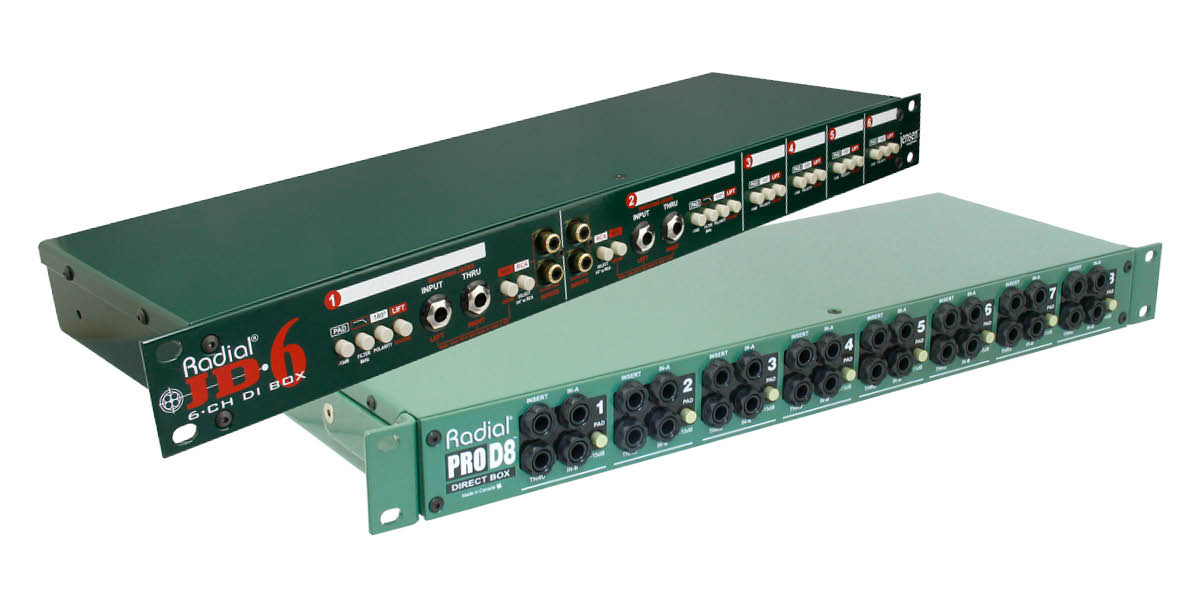 Multi-channel rackmount DI boxes are ideally suited for touring or studio use, with a number of channels in a single rack space.