What is the Workhorse?

The Workhorse is a rack device that holds eight 500 series modules. These can be used individually or in series to create custom channel strips and unique signal paths. The on-board 8×2 summing mixer allows the engineer to mix directly from the modules and send the left-right output to a recording system, PA and headphones.

Who is it designed for?

Where will the Workhorse be used?

Because of the modularity, the applications are truly without limit. In the recording studio, the Workhorse enables the engineer to quickly add or remove modules to suit a particular song or passage. For mastering, the engineer can select specific modules to suit ones personal preference. In the field, the engineer could set up stereo, quad, or a multitude of channels by combining two or more Workhorses together.

Would a guitarist benefit from having a Workhorse?

Absolutely! In the studio, the Workhorse can be combined with modules like the Radial JDV instrument preamp, X-Amp Reamper and JDX speaker emulator to create all kinds of musical textures. On the road, the guitarist could create unique audio paths for acoustic and electric guitars.

What makes the Workhorse special?

The fact that you can customize your audio system to meet specific demands and then mix the outputs without having to integrate additional outside gear makes the Workhorse invaluable. And being able to use a host of available modules means that you do not have to pay for expensive power supplies each time; only the signal generating device. This means you get high quality for less money.

Why has this not been done before?

In a way, it has. The Workhorse’s modular concept actually originated from recording consoles. Engineers liked the sound of certain modules but may not have liked the way the console worked. By pulling the modules out of the old desks and putting them into a simple rack-housing, the concept was born. We simply brought back the mixing aspect to better suit today’s recording environment.

How do you patch modules in?

As with any audio system, you should mute or turn off the system before patching to avoid any harmful transients. Modules slide into the Workhorse effortlessly and are then held into place with the top and bottom retainer screws. The signal is then routed from one module to another or sent to the summing mixer.

When would you use the link function?

This is usually reserved for stereo signal paths where you would like both channels to work exactly in the same fashion. Compressing the output of a stereo mix is a good example. Modules like the Radial Komit are equipped to manage stereo signals with the link function. When engaged, the ‘odd numbered’ module’s knobs will control the even numbered module in a master-slave configuration.

What is the ‘feed’ function used for?

This lets you feed the audio from one module into the next one without having to use external cables. So for instance, you could have a preamp going into an EQ, feeding a compressor. You could then simultaneously tap the signal from each module using the XLR output, or audition the summed output via the master mix buss.

Can I use old API Lunchbox modules with the Workhorse?

Yes, the Workhorse will work just like a standard Lunchbox with older modules. To take full advance of the bussing capabilities built in the Workhorse all you do is add an XLR to D-Sub cable and connect it to the summing mixer d-sub connector.

Why is Radial not a VPR Alliance Member?

The membership asks that we send modules to API to make sure our work correctly. It also suggests that modules should be not be sold for under $700-US. Although we respect API, their excellent engineering, and the legacy that they maintain, we feel our engineering team is more than capable of producing high quality products that will meet or exceed the very best equipment in the world. As for price, we plan to offer products at several price points and therefore do not wish to be limited on this matter. If we sell a direct box for $200, and turn it into a 500 series module, we cannot see charging an extra $500 for it.

What is a Virtual Ground Mix Buss?

A ‘Virtual Ground (or Earth) Mix Buss’ is a well liked approach used to create a mixer that is both efficient and noise free. It was popularized by recording mixer console pioneers such as Neve and SSL and has become the format of choice for analogue recording.

What makes one console sound different from another?

The ‘sound’ of a console is mostly attributed to the EQ section. For instance, some folks like the sound of British consoles and the famous British EQ. More expensive consoles employ transformers in their signal path. The transformer will also impart a certain signature. The Jensen transformer is very clean, natural and warm sounding.

How would you rate the sound of the Workhorse?

The Workhorse has no EQ, no effects busses and is very compact. This makes it very quiet and natural sounding. The module you select will pretty much generate the sound, not the Workhorse.

Why are most summing mixers really expensive?

This may be due to the brand equity or maybe because they have expensive transformers on every channel. Some companies can charge more because they are well admired.

In a pinch, can I use the headphone out as another stereo sound source?

Yes. But be careful not to overload the receiving device! There is a lot of signal level coming out of those jacks so you will want to start with the volume set very low and increase as needed.

Some headphones need more power. How does the Workhorse deal with the problem?

There is some truth to this. You should always turn off the phantom power when it is not required. Older ribbon mics are particularly sensitive to phantom and can harm them if the polarity is not correct. But today, this is less of a problem since pretty much all manufacturers follow the AES standard.

Why did you use an external power supply?

For several reasons: First: power supplies generate noise. For years large console manufacturers have always put the power supply outside. By keeping it away, there is less opportunity for induced noise. Second: the power supply is the number-1 electronic point of failure in electronic devices (after user error and connector/switch issues). Should a problem occur, the power supply can be replaced by the user without having to return the Workhorse and have it serviced. Third: the Workhorse is so jammed with electronics, there was simply no space left inside!

Is it true that some 500 series rack do not have enough power?

The API spec calls for 130mA of current on each rail. This is normally plenty for most modules. There are however some companies that employ tubes or for whatever reason are more power hungry. This may be the reason that this problem has surfaced. The Workhorse employs a pooled supply with 1200mA that you can use however you wish. So if you have two modules that need 200mA each, you still have 800mA to supply the rest. Keep in mind most modules require on average about 45mA of current.

Can I use the summing mixer via the 25pin DSub along with modules at the same time?

Yes. The inputs will simply combine together. If you only wish to work with the signal going into the D-Sub, you woudl simply turn down the levels on the modules that are plugges into the rack.

Will the power supply in the rack affect the tone of a module?

No and yes. When a manufacturer produces a module, they will regulate the incoming power so that the circuit gets what it needs to do the job. So if you give a module extra power, it will simply ignore it. Where the tone may suffer has to do with shortage of power. This can starve the circuit which may increase distortion and resulting tone.

Some manufacturers claim that their power supplies sound better than others. Is this possible?

There is no question that if you have more available power, you will have more headroom. This generally results in less distortion. However, given the fact that most 500 series modules work within the framework of +/-16V and about 130 milliamps, so long as the power supply is clean and regulated, they should all sound about the same.

Yes. In most cases the output from a 500 series module is line level. This will simply act like a multi in a studio patchbay.

Can I simultaneously route the summed output from the Workhorse mixer back into two modules?

Yes, but you must limit the number of summed channels to six in order to leave two available for further processing. This will avoid a feedback loop.

Will the link switch on the Workhorse allow me to create a stereo link with a 3rd party 500 series module that doesn’t have a link function?

No. If the manufacture of the module hasn’t built a link feature into the module itself then the link switch on the Workhorse will not be active. 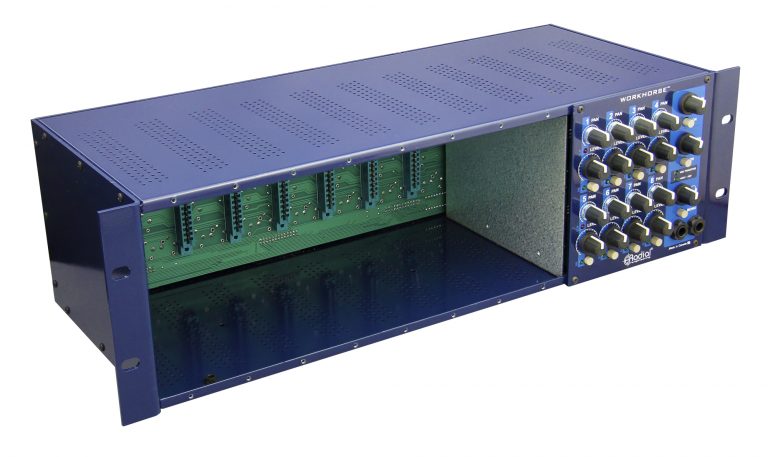 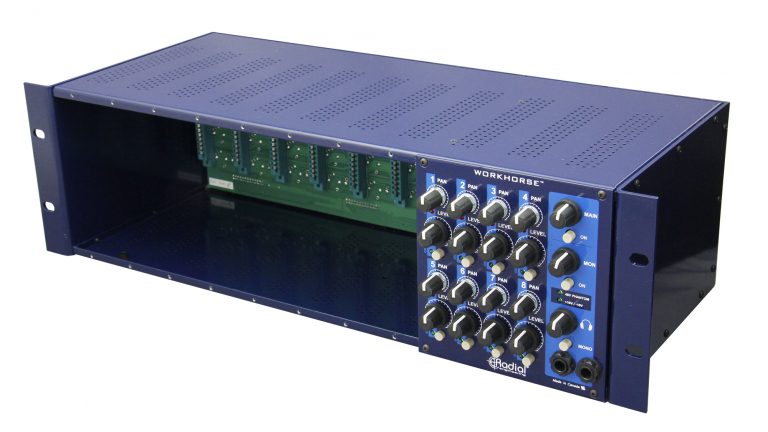 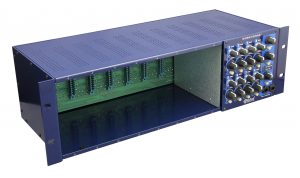 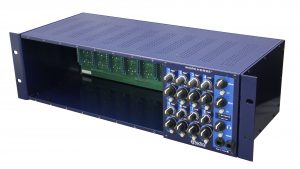 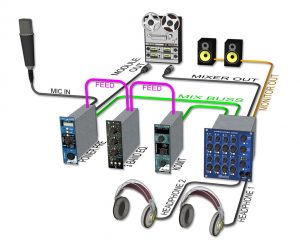 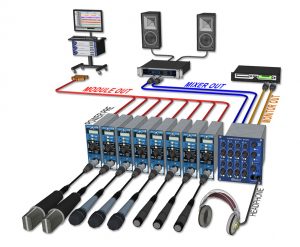 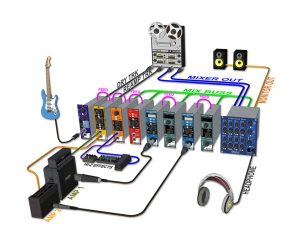