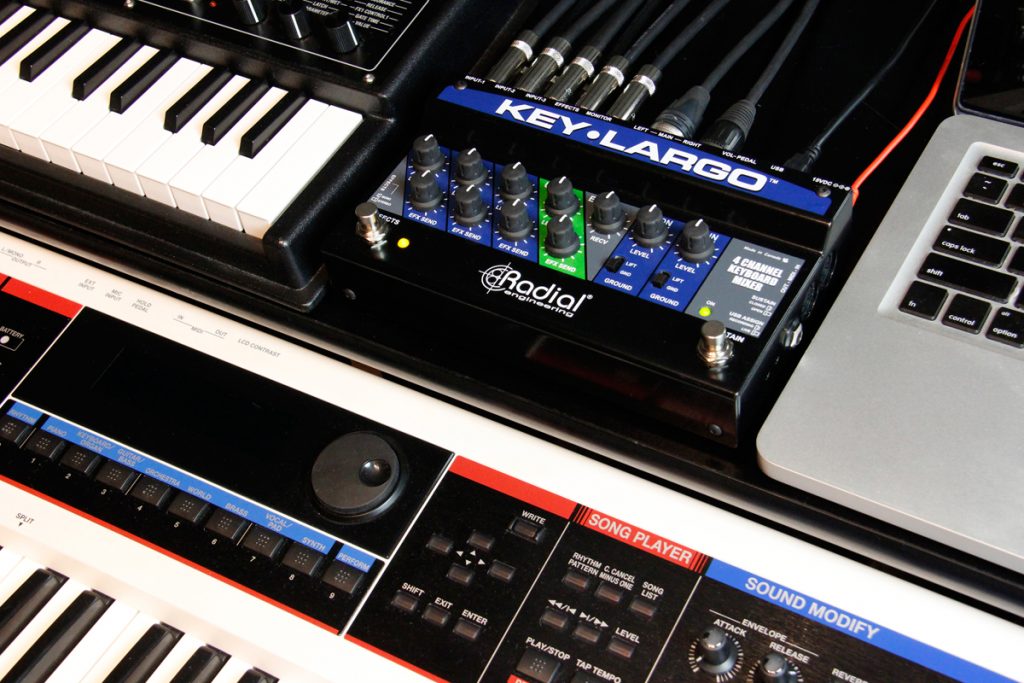 The following is a review by Loren Alldrin of Church Production Magazine published on January 24, 2018.

Many guitarists and sound engineers are familiar with Canadian company Radial, thanks in large part to their top-notch DIs and guitar pedals/amp simulators. If you need to plug an electric guitar, acoustic guitar, bass or other instrument into a mixer, Radial probably has a product that will do it in style. The list of professional musicians using the company’s gear is long and distinguished.

Now, Radial turns its attention to the keyboard world with the new Key-Largo keyboard mixer. Key-Largo is designed to be the “nerve center” of a keyboard rig, combining audio mixing with effects, MIDI, USB and sustain pedal functions. It offers an interesting (and generous) combination of features packed into a small package.

When it comes to physical configuration, Key-Largo has more in common with a guitar stomp box than a compact mixer. Radial knows how to bend sheet metal to survive life on the floor, and Key-Largo is indeed built like a tank. The little thing is heavy, with sturdy knobs and industrial-strength switches. Key-Largo has enough active electronics to wipe out batteries in a hurry, so its only power source is a traditional wall-wart (with handy strain relief).

In keeping with the stomp box format, Key-Largo has two switches designed to be operated with your foot. The left switch turns the effects loop on and off, while the right switch functions as keyboard sustain. Setting up the sustain is easy: connect a standard 1/4-inch cable between your keyboard’s sustain input and the Key-Largo’s sustain output, select polarity, and sustain away.

At the heart of Key-Largo is a stereo audio mixer with effects bus and loop. On the analog input side, Key-Largo has three stereo inputs on 1/4-inch connectors. Analog outputs include transformer-isolated XLR stereo for the house and balanced mono monitor output. Key-Largo’s effects loop offers mono or stereo operation (the latter requires TRS connectors).

Mixing on Key-Largo is simple, as each input has just a level and effects send knob. A “RECV” knob controls the overall return level of the effects to the stereo mix. Main and monitor outputs are identical, with the monitor output summed to mono. Both outputs have a level knob and a ground lift switch.

Key-Largo’s USB support includes stereo audio as well, with 24-bit resolution at sample rates up to 192 kHz. The USB audio output comes off the main stereo bus, allowing you to record the Key-Largo’s mix on the computer with impressive fidelity. Audio from the computer comes into the fourth stereo input of Key-Largo, complete with its own set of level and effects send controls. Radial designed the USB input primarily as a means to mix in virtual instruments from a laptop, and it works perfectly for this application.

Recognizing that this little box will be used both for live performance and old-school recording (not programming), Radial gave Key-Largo’s USB audio input two operating modes. In LIVE mode, USB audio from the computer is mixed into the stereo and effects busses just like any other input. In RECORDING mode, the USB audio appears only on the monitor and mix outputs. Computer audio doesn’t pollute the effects bus or the USB record output, so you can play along with the computer’s output and capture a clean recording. Pretty clever.

In use, Key-Largo is a study in excellence. It has an unmistakable feel of quality, and it sounds pristine. Its analog side preserves the clarity and detail of even dense synth stacks, while the digital side offers resolution to the point of overkill. Headroom at the A-to-D converters is generous—I found a hot keyboard mix to still maintain a solid 10 dB of headroom. Even with all that headroom, though, a simple peak indicator would be appreciated.

Simple metering isn’t the only thing Key-Largo lacks. I found myself wishing for a headphone jack—a surprising omission. I was also a bit stumped by the shape (form factor) of Key-Largo. It’s built like a stomp box, but I could never relegate such a spiffy piece of gear to the floor. Nor could I allow it to suffer the indignity of being stepped on. Once on the floor, how could I reach its knobs? No, I think Key-Largo would have made more sense with a standard compact mixer shape and a few external footswitch inputs.

Key Largo combines a broad range of capabilities yet maintains simplicity of operation. It just works, without undue fuss or drama. That said, be realistic about where Key-Largo sits in the grand scheme. Key-Largo doesn’t have enough inputs to eliminate a large keyboard sub-mixer. You’ll still need a monitor mixer to hear the rest of the band, and a separate signal path for computer backing tracks.

Where Key-Largo finds it niche is in wrangling a typical keyboard setup with elegance, efficiency and flexibility. Add in USB support for virtual instruments and recording and you’ve got nearly unlimited potential. That Key-Largo costs just $379 USD makes it a great value to boot. Keyboardists, it may be time to consider a trip to Key-Largo.