The following is a review by Stephen Fortner of Electronic Musician magazine in their September 2017 issue.

We gigging keyboardists have pretty simple needs in onstage sound support. So why has fulfilling them always felt complicated? For mixing two or three keyboards in stereo and some way to feed our powered stage speaker separately from the main P.A., we carry a compact mixer. For a ground lift switch to defeat the electrical buzzes that often plague live venues, we carry direct boxes. If soft synths running on a laptop are part of the rig, we need an audio/MIDI interface. Radial’s new Key-Largo™ is the first single device I’ve used that combines all of these functions—and performs a few other useful tasks as well—in the footprint of an oversized stompbox. Its mission is to simplify our lives, and it succeeds.

ANALOG INS AND OUTS
The Key-Largo is meant to be placed on the floor like a stompbox. If you’d rather have it closer at hand, it’s so hefty that it won’t bounce around if perched on blank keyboard-panel space. (It comes with stick-on rubber feet but I’d use heavy-duty Velcro for maximum peace of mind.) Nor will the weight of even a full complement of plugged-in cables tip it backwards. Like all Radial products, its steel construction is designed to withstand zombie apocalypse-level road abuse. Seriously, this thing is a beast.

The I/O complement begins with three 1/4″ stereo input pairs for keyboards and other line level sources. These are unbalanced, but the Key-Largo ultimately turns everything into a balanced signal (see Figure 1).

The fourth input channel is for the USB connection, which is perhaps the best implementation we’ve seen for seamlessly bringing computer based virtual instruments into a live rig. More on this in its own section below.

Each input channel has its own effects send; the master return knob is just to the right of the input section. This is intended for any pedals or other external effects you may have, and yes, you can use stereo effects via the proper Y-cables. With a monaural effects chain, summing to mono is problem free. Overall effect bypass is toggled using the stompbox style button on the left.

Master outs are on XLR connectors, and they’re balanced and transformer isolated as with high-quality direct boxes. Monitor outputs (for driving powered stage wedges or your in-ear system) consist of a stereo 1/4″ pair and are likewise balanced, with their own volume control.

There’s also a stereo TRS send-and-return loop for a volume pedal—not a controller-type sweep pedal, but the kind that attenuates the audio itself—which affects the main and monitor outputs
alike. This is useful both as an expression tool and as a “panic button” if you’re not sure which keyboard has suddenly started misbehaving and making an unwanted noise: Slam it down and find the culprit with the benefit of silence.

USB AUDIO, MIDI
The Key-Largo’s USB operates in two modes, Live and Recording, selected by the sort of recessed switch you operate with a toothpick or pen point. In Live mode, incoming audio (mono or stereo) is mixed to the main, monitor, effects, and volume pedal buses just like an analog input. If you’re reaching for Ivory pianos or that cool Arturia CS-80 emulation at the gig, this is the behavior you want.

In Recording mode, the Key-Largo acts more like an audio interface, routing a 2-channel mix (but not separate inputs on separate tracks) to your DAW as well as adding the computer’s output to the main and monitor buses. Here, a connected volume pedal also affects the overall USB send.

Audio resolution goes up to 24-bit/192kHz and I can attest that the sound quality is stellar for studio as well as live applications. For recording analog synth tracks direct, the Key-Largo stood up next to my beloved Universal Audio Apollo like that little girl statue stands up next to that bull statue. Drivers (downloadable on the product page at radialeng.com) are required for Windows; on Macs the Key-Largo is class-compliant and simply shows up as both an audio and MIDI device in DAWs and in the Audio/MIDI Setup program.

Speaking of MIDI, there is some solid and useful functionality in this department. Old-school MIDI In and Out ports are on the right side panel, and they shuttle MIDI data to and from USB. Normally you’d hook a USB MIDI keyboard directly to your soft-synth laptop, but if you have an older controller (or are out of USB ports) you’re covered. Want to drive an analog synth with sequence data from your DAW? Likewise. 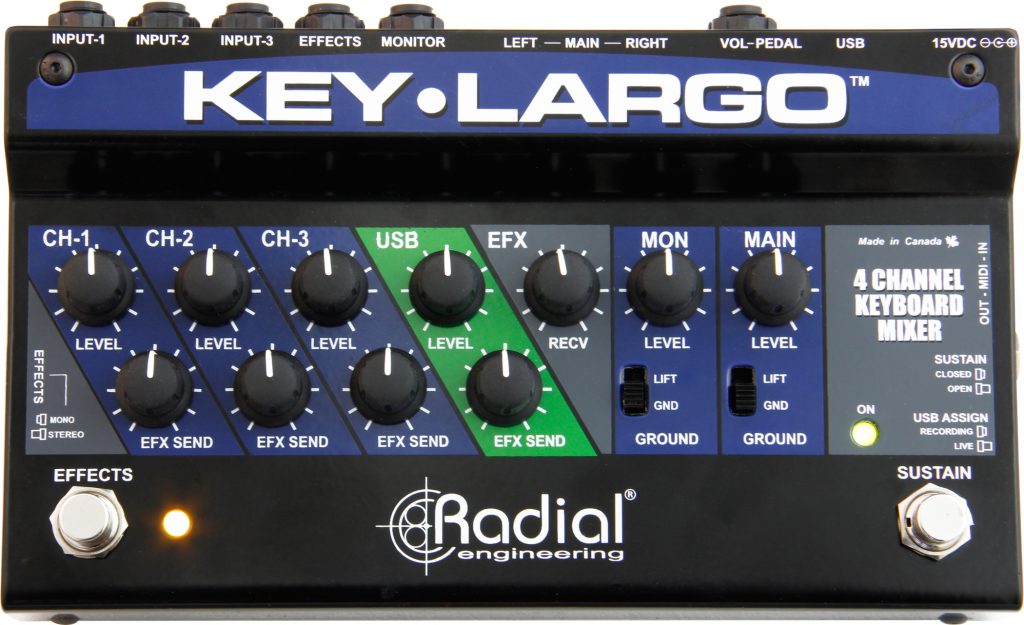 USE CASES
With traditional compact mixers, I’ve usually devoted a pre-fader auxiliary send to a QSC K10 speaker for onstage monitoring, which means I’m running in mono. If I wanted stereo I’d run the master outs to a pair of K10s, then the speakers’ thru outs to the P.A. snake, which meant that the only way to have “more me” onstage than what the sound operator wanted up front was to reach for the volume controls on the backs of the speakers themselves—not at all an ergonomic move while I’m playing.

The dedicated monitor bus on the Key-Largo hit the exact sweet spot between these two approaches with none of the compromises of either. It gave me the same relative mix of keyboards as what I’m sending to the front-of-house (which is what I want to hear), yet I could hear more or less of it with a single knob twist. In conventional mixer terms, this is because while the monitor bus is post-input-gain, it’s effectively pre-“fader.”

Radial says that a 24V internal power rail facilitates wide dynamic range, and to my ears the Key-Largo let all of the subtlety through on soft passages, yet didn’t get even a little crispy when I pushed it hard. In fact, I don’t recall a compact keyboard mixer ever performing this well sonically at a loud gig.

Ground buzz usually makes itself known during sound check, but the reality is that sometimes you don’t get a sound check. I’ve also had buzzes mysteriously manifest during a set, perhaps because the ground is intermittent on one stage circuit or another. With not one but two ground  lifts (monitor and main outs) right on the front panel, the Key-Largo let me surgically remove buzz without diving for direct boxes and with no one the wiser. File under “Why doesn’t everything have this?”

The Key-Largo can also sub in for one of your sustain pedals. Hook a 1/4″ cable from the jack on the right-side panel to the pedal input on your keyboard, and you’re golden. Polarity is switchable via another recessed button, and even though the button you step on is clicky, its behavior is (correctly) momentary. I prefer a piano-type pedal for most applications, but for that second or third synth, this saves your foot from chasing one more pedal around the floor.

It feels forced to think about what the Key-Largo leaves me wanting. Mic inputs would be nice for miking up a Leslie, but if you’re in the real-Leslie club, you probably don’t mind running a setup that involves more plumbing. More conspicuously absent is a headphone output, which would be handy for hotel-room shedding before the gig or for pre-checking your keyboard mix before the sound engineer has shown up to turn on the monitor system. Get this, though: I decided to try my Blue MoFi headphones, which have their own preamp built in, with the Key-Largo’s effects send pressed into service as a line-level headphone out. It worked nicely.

A KEY MIXER
In three decades of gigging, I don’t believe I’ve come across a mixing solution that’s more precisely targeted at the needs of the modern live keyboardist. The Key-Largo simply does everything you need and nothing you don’t. If soft synths are part of your setup, it synergizes your hardware and software worlds as though your laptop were just another keyboard, with no fuss. If you’re used to a more conventional compact mixer, you might miss having at least a bass-mid-treble onboard EQ to make tweaks to fit the room, but consider that all your keyboards probably have EQ themselves. The mix bus quality you’re getting is head and shoulders above any compact mixer other than maybe a Speck XtraMix, which is to say, way above what this jewel-like little Swiss Army knife costs. For 90 percent of my gigs, I’m going Key-Largo and never going back. It’s as though someone really looked at the needs of us keyboard players, listened, and said, “Oh, uh, right. Someone should make that.” Well, someone did, and their name is Radial.

LIMITATIONS
– No headphone output.
– No onboard EQ.
– Wallwart AC supply is only power option.