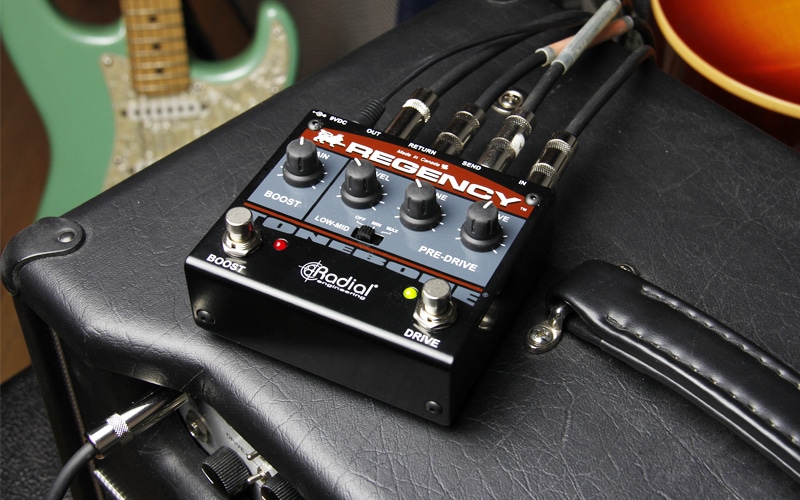 The following was written by Bobby Cannon of Guitar Player Magazine in their September 2017 issue.

When in the process of recording a new album, I’m always on the hunt for something that could add a little more magic to my guitar tracks. I also realized that my favorite Peavey® 6505 combo needed a little help every now and again. The Regency let me solve both situations with one pedal.

A cool “get more goodness” pedal, the Regency ($169 street) is designed to add drive and sustain to an already saturated amp, and it does this without adding hiss, hum, or other audio artifacts. It’s tough enough to take any mistreatment your gigs can dish out, and it includes a handy effects loop for adding pedals to the signal chain. The controls are simple, but mighty. The Pre-Drive section offers Drive (for tailoring your distortion sound), Tone, and Level, and it also includes a 3-position Low-Mid section (off/min/max) that gooses the “stouter” frequencies of your guitar to taste. The Booster section delivers up to 23dB of class-A signal gain, which can definitely send an amp into juicy saturation, or power solos and riffs out of a dense band mix.

On my 6505 and Vox® AC30, the Regency’s Pre-Drive controls made it easy to dial in grittier and more saturated tones that still retained the sound of the amps, but produced additional impact, thud, and articulation. The Low-Mid helped maintain the beef (or lose a few pounds) when switching between guitars armed with humbuckers and single-coils. Of course, all hell broke loose with a maxed-out Boost level. The amps came alive with blistering, soaring, and brutally sustaining tones for soloing. If you love playing with outrageous levels of drive, the Regency could be your tone monarch.

Concerns: Horizontal footprint might be tricky for some pedalboards.

For more on the Tonebone Regency.