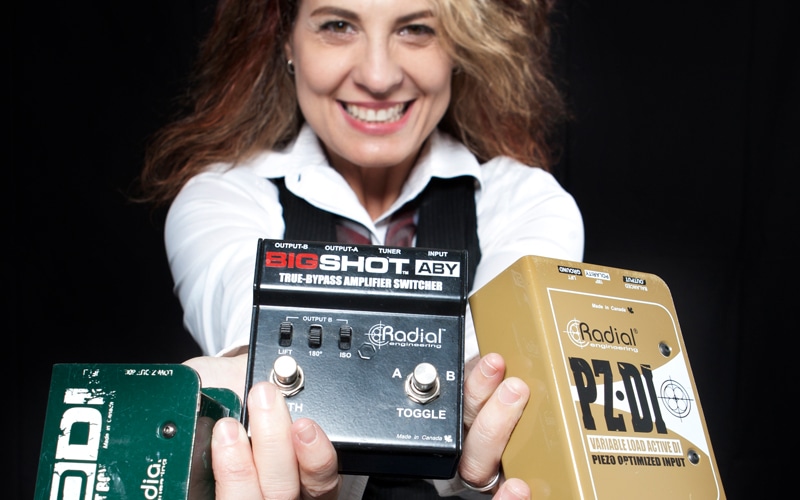 It is said that some people peak in high school. Janet Robin wasn’t having any of that. Her road from youth to late teens was just the prelude to a career that continually showcases her boundless talent and energy. From studying guitar with a superbly talented and famous teacher through rocking it out with the biggest of resplendent 80’s hair in a successful all-female hard rock band, where would one expect she would go from there? Probably best Robin explains as she’s no stranger to taking the lead.

“Getting the chance to study with Randy Rhoads for 6 years as a young guitar student expanded my passion even more for the guitar. I feel so grateful for having that as part of my experience being a guitarist. Getting signed when I was 18 with my all girl rock band, Precious Metal, was a big deal for me and I finally felt a little validated, although my truest validation came when I got the gig playing in Lindsey Buckingham’s first ever solo band. That felt like going to ‘grad school.’ It was such a professional situation and he’s such a perfectionist and demanded nothing less… It really turned me into a pro during my early 20’s.”

The close of Buckingham’s tour brought several years of performances with artists including Meredith Brooks and Michelle Shocked while also taking on more tours including opening and sitting in with Tommy Emmanuel and a roster of shows with Air Supply. This brings Robin’s story to her current career path: “I finally decided to go at it solo, write my own tunes, sing, and tour.” And that is just what she is doing with the same passion and ferocity of her early career: “Right now I’m in a bit of crunch mode as I have several new songs I’m demoing and working to get ready for a show I have here in LA in May then send off for 6 weeks of touring in Europe. In between, I’ve been producing a couple of artists in my home studio and trying to finish up those projects before I leave. When I return I’ll have a short break but plan on touring Texas in August, and then in September a full month all the way up the west coast to Seattle, Idaho, Utah, Arizona, and back home (LA). In November I may look at some East Coast dates. In between all of this I’ll still be finishing up more demos as I plan on recording a new studio cd either by the end of this year or beginning of next year.”

Robin is also a teacher, sharing her gift and the skills that Rhoads imparted years ago. She is sought out as a mentor to her female students and is gratified to see how times have changed for female guitar players: “I have several female guitar students. I would like to have more. Some are just doing it for enjoyment, some are in need of learning guitar to complement their acting skills and some are in local bands. I love teaching the girls of course, but I do find it interesting that boys want to take from me, no matter that I’m female, just because they like the fact I studied with Randy, and also like my playing. It’s respectful and I like that these kids are growing up hopefully, being gender blind. Randy as a teacher was gender and age blind. I was his youngest student and one of his only female students. He really could care less. It was all about playing well, and practising, and showing your passion.”

“I’m a performer at heart. I love the adrenalin of being on stage and the preparation of putting an entertaining show together. I learned a lot from Lindsey in regards to that. I love connecting with the audience and people who love music. Music is so powerful and I’m just happy I can make it and play it!”

As Robin prepares for her upcoming tour and lays down her demos she explains how she’s come to rely on some key pieces of gear from Radial Engineering: “I think I was at a venue somewhere when I first used a Radial DI and I just loved it. It was solid as a rock, and crystal clear. 90% of my touring shows are solo acoustic. I’m a purist. I like to hear my acoustic the way it should sound, and Radial’s gear provides that for me and never fails. Currently, I’m using the ProDI (passive direct box) for my touring rig and the PZ-DI (orchestral instrument DI) for my recording rig-that’s very applicable for bass, acoustic, or other string instruments. I recently used the PZ-DI in my studio on a session that featured a standup bass, and it worked like a charm. I also use the Big Shot ABY box (true bypass switcher) to switch between multiple guitars on stage but being able to keep it all going through my one pedal board. It’s seemless, makes for a quick transition…that really helps when you want the show to keep running smooth. Love it.”