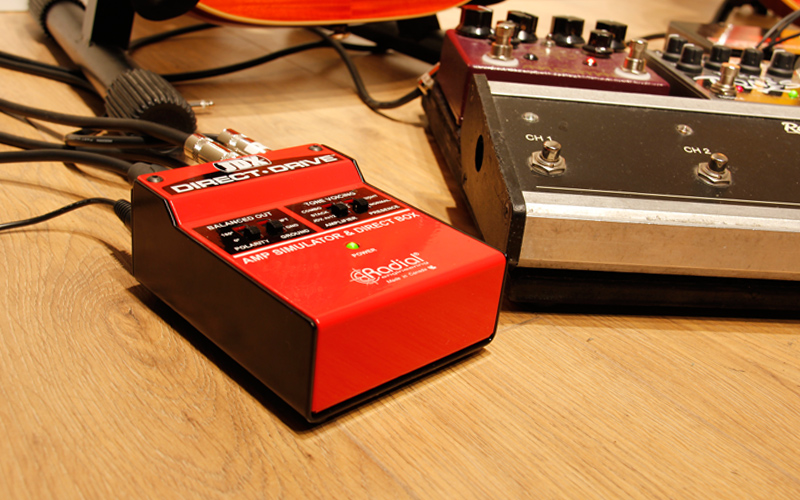 Vancouver, BC – Radial Engineering Ltd. is pleased to announce the JDX Direct-Drive™ is now shipping.

The JDX Direct-Drive is a unique and powerful device that simulates the sound of a guitar amplifier while doubling up as a direct box. In other words, with the JDX Direct-Drive on a pedalboard, you can do a gig without carrying an amp to the club. Radial’s Central Territory Manager, David ‘Shuu’ Guidish, spent almost two decades on stage as a guitar tech with various bands including a ten year stint with Nickelback.  According to Shuu: “On the road you get to see all kinds of guitar and bass setups and you are constantly working at getting great tones from the stage amps, in the monitors and the PA while trying to keep everyone happy!  To this end, we have been asking the Radial engineering team to come up with a solution that would enable a guitarist to connect directly to the PA before hitting the amp. This would allow the sound engineer to capture the tone right after the pedals and manage it before it hits the amps. This setup eliminates unknowns such as room acoustics and resonance which invariably will force the musician to change the tone on stage each night.  It is important to clarify that the JDX Direct-Drive is not like a regular direct box. What the Radial Einsteins did was replicate the sound of a guitar amp in a pedal format by emulating various guitar amp and speaker curves, starting with the popular JDX™. On electric guitar, a typical DI sounds like a box of bees! The JDX Direct-Drive sounds natural, more like a real amp.  This allows the engineer to mix and match the ‘pre’ stage-amp tone with the mic’d sound of the cabinet to quickly get a consistent tone night after night. For fly dates and guys who play in clubs, the JDX Direct-Drive eliminates the need to carry an amp to the gig. And today, with the high cost of airline fees, this is truly a remarkable advancement.”

The Radial JDX Direct-Drive begins with a traditional ¼” guitar input and passive thru-put to feed a stage amp. This is then followed by a dedicated tuner output that is buffered in order to eliminate loading on the pickup or noise from the quartz clock.  The guitar signal is then passed through a series of filters to create Radial’s signature JDX tone.  This is modelled after the sound of a Shure SM57™ in front of a Marshall™ 4-12 cabinet.  The JDX Direct-Drive pushes the boundaries with two more settings. The first adds a typical Marshall™ tube head character to the signal path while the second brings in something similar to a Fender Twin™ combo. Note these companies are not related to Radial and are only indicated in order to give the reader a reference.  The two amp tones can be further tailored using a presence switch to add extra sparkle.  The amp tone signal exits the JDX Direct-Drive via either a ¼” guitar level output or via a balanced XLR to feed the PA.  The direct box output is outfitted with a 180° polarity reverse switch to help phase-align monitors with the stage amp along with a ground lift switch to help eliminate the nasty hum and buzz caused by ground loops.  The JDX Direct-Drive may be powered using a standard 9V power supply or typical pedalboard power brick.

As with all Radial products, the JDX Direct-Drive is made to handle the rigors of professional touring with 14-gauge steel throughout. This not only helps prevent damage to the internal PCB, it also reduces susceptibility to noise from external magnetic fields.