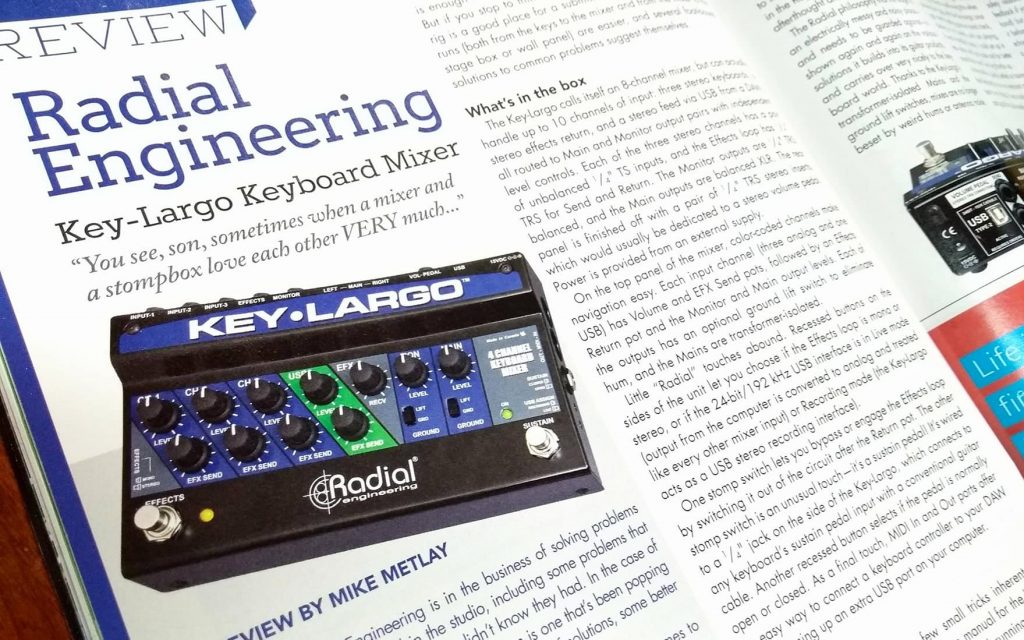 The following is a review by Mike Metlay originally published in the September 2017 issue of Recording Magazine.

“You see, son, sometimes when a mixer and a stompbox love each other VERY much…”

Radial Engineering is in the business of solving problems in the studio, including some problems that recording musicians didn’t know they had. In the case of the Key-Largo™, the problem is one that’s been popping up for years and has had a whole bunch of solutions, some better than others—namely, keyboard submixing.

Keyboardists have a special set of needs when it comes to creating submixes for the control room or FOH mixer. Usually they don’t want to mess with things like channel EQ or compressors, because tone and dynamics control are built into their keyboards. More often than not, once they set the balance of the various keyboards in the rig, they don’t want to mess with it. They have to blend multiple sound sources, including virtual instruments on laptops, as seamlessly as possible. Moreover, with rigs that tend to be cluttered with gear to keep track of, they’re always on the lookout for solutions that are compact and stay out of the way. The Key-Largo checks off every one of those boxes, plus a couple of others. 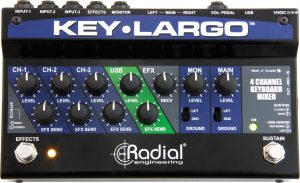 And step on it
The Key-Largo is, like most Radial boxes, encased in 14-gauge steel with a tough-as-nails powdercoat finish. It looks like it’s designed to survive being stepped on… and that’s a good thing, because unlike pretty much every other keyboard mixer ever, the Key-Largo is supposed to be stepped on. That’s right, folks—this mixer lives on the floor.

Okay, take a few deep breaths before we go on. We know how you feel, because the idea of a mixer underfoot is enough to make most engineers cringe (at the very least). But if you stop to think about it, the floor under a keyboard rig is a good place for a submixer: it’s out of the way, cable runs (both from the keys to the mixer and from the mixer to the stage box or wall panel) are easier, and several foot-based solutions to common problems suggest themselves.

What’s in the box
The Key-Largo calls itself an 8-channel mixer, but can actually handle up to 10 channels of input: three stereo keyboards, a stereo effects return, and a stereo feed via USB from a DAW, all
routed to Main and Monitor output pairs with independent level controls. Each of the three stereo channels has a pair of unbalanced 1/4″ TS inputs, and the Effects loop has 1/4″ TRS for Send and Return. The Monitor outputs are 1/4″ TRS balanced, and the Main outputs are balanced XLR. The rear panel is finished off with a pair of 1/4″ TRS stereo inserts, which would usually be dedicated to a stereo volume pedal. Power is provided from an external supply.

On the top panel of the mixer, color-coded channels make navigation easy. Each input channel (three analog and one USB) has Volume and EFX Send pots, followed by an Effects Return pot and the Monitor and Main output levels. Each of the outputs has an optional ground lift switch to eliminate hum, and the Mains are transformer-isolated.

Little “Radial” touches abound. Recessed buttons on the sides of the unit let you choose if the Effects loop is mono or stereo, or if the 24-bit/192 kHz USB interface is in Live mode (output from the computer is converted to analog and treated like every other mixer input) or Recording mode (the Key-Largo acts as a USB stereo recording interface). One stomp switch lets you bypass or engage the Effects loop by switching it out of the circuit after the Return pot. The other stomp switch is an unusual touch—it’s a sustain pedal! It’s wired to a 1/4″ jack on the side of the Key-Largo, which connects to any keyboard’s sustain pedal input with a conventional guitar cable. Another recessed button selects if the pedal is normally open or closed. As a final touch, MIDI In and Out ports offer an easy way to connect a keyboard controller to your DAW without using up an extra USB port on your computer.

In use
Aside from explaining a few small tricks inherent in the hidden switches, the clearly written manual for the Key-Largo is pretty much unneeded to get up and running. In a matter of minutes, I had a MIDI keyboard controlling my DAW and three other synths playing along with it. It took me a while to get used to the idea of having the mixer on the floor… (unfounded) fear of damage aside, I’m used to being able to reach for mixer pots to control levels. On the other hand, every keyboard has a volume knob, and summing everything at or near unity gain works well once you get used to it.

One thing that impressed me right off the bat is how wicked silent the KEY-Largo is. Very often, cheap desktop mixers carry sonic compromises like a high noise floor or digital noise from the USB interface. The Key-Largo delivers all of its audio with nary a hint of hiss or buzz, and it’s worth the price of admission just for that. The pots and switches all feel like they’d survive anything a studio gig or live tour could throw at them, and overall sound quality was exceptional. This extended to the USB interface itself; the converters in the Key-Largo are much more than an afterthought and are crystal-clear.

The Radial philosophy that the stage is an electrically messy and noisy place— and needs to be guarded against—is shown again and again on the various solutions it builds into its guitar products,
and carries over very nicely to the keyboard world. Thanks to the Key-Largo’s transformer-isolated Mains and the ground lift switches, mixes are no longer beset by weird hums or antenna noise.

Compact and convenient yet reassuringly solid, the Key-Largo did its job neatly and well. When I wanted a headphone cue feed independent of the mains, I just plugged a Y-cable into the Monitor outputs and fed my headphones that way, obtaining plenty of level. That brings us to the “having it on the floor” thing. I found myself loving this when playing live gigs with the Key-Largo; once I got used to setting gains at sound check, dialing in my reverb, and just playing, it was incredibly handy. I could set up in less space with less hassle and far better sound than usual. Two big thumbs up.

In the studio, I quickly settled on having the Key-Largo up on my keyboard stand, next to my laptop. It was nicely compact and good for quick tweaks while tracking, and I didn’t miss having the footswitches handy. In fact, the footswitches were the only part of the Key-Largo that I felt left room for improvement. Both clicked loudly when pressed, fine on stage but not fine in a quiet studio near open mics. Also, the Effects switch comes after the Return in the circuit, which is great for safety reasons (no runaway echoes or feedback if your delay pedal gets out of hand) but less musical than placing it before the Send, which would allow echoes and reverb tails to die away after a solo rather than getting chopped off.

Those are small gripes compared to the fantastic overall experience of working with the Key-Largo. It’s refreshing when a seemingly “been there, done that” recording situation is given a new treatment, with quickly obvious benefits. If your studio or stage work includes keyboards and virtual instruments, you may find yourself wondering how you got along without the Key-Largo.