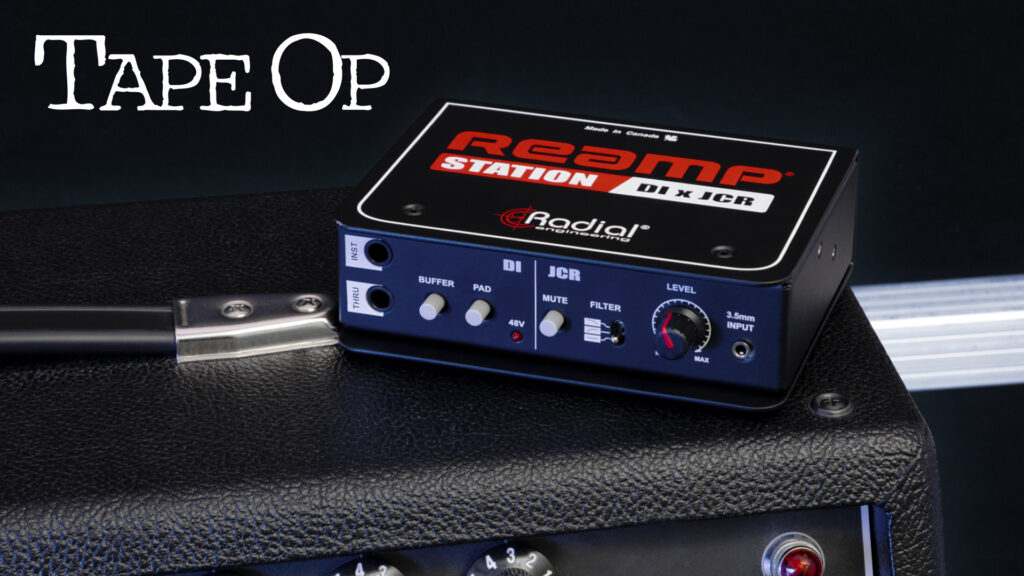 The following review by Gus Berry was originally published in the Nov/Dec 2022 issue of TapeOp Magazine. See the Review Here

As of this summer, I have been mixing fully in the box and loving it. Part of my new mix setup, however, does include two Radial Reamp Station boxes. This allows me to send audio to my guitar pedals quickly – or to an amp head (located in another room, inside a custom-built iso box thanks to my buddy Alex Watson), and get hands-on with effects. Since making this change, I believe my mixes have improved due to faster recall and more active time getting creative during the mixing process.

Part of what makes this setup work so well for me is that the Reamp Station is both a direct box and re-amper in one package, with extra features that make it practical and flexible for studio use. For starters, the Reamp section can be fed by XLR, 1/4-inch, or even 3.5mm inputs, allowing me to send audio directly from a phone or laptop to the pedals and amp. Pretty cool! It also has a Level control for the output and a high- and low-pass filter switch, which is a brilliantly easy way to sculpt sound before sending it off to an amp that may not handle cymbals too well, or a distortion pedal that blows up from too much low end.

When ready to capture a creatively-mangled signal into the DAW, simply plug in to the Reamp Station’s ‘Inst’ (instrument) input and utilize the DI section. The DI input is an unbalanced 1/4-inch, has a Thru, Lift (ground lift), a -15 dB pad, and a Buffer switch that helps take the load off of passive pickups when feeding multiple sources. Phantom power is needed to use the DI, however, it is not required for re-amping. The back of the unit has a 180º phase button that applies to the XLR Direct Out to get direct and amp signals in phase at the source.

I have a pair of Reamp Stations plugged into the preamps of my Apogee Symphony I/O Mk II, and I’ve already quickly favored them over my other outboard pre’s for direct bass and keys. It has a clean, even low end with a relatively smooth top end that doesn’t get too clicky. Another feature that makes the Reamp Station particularly useful in the studio is the Link inputs and outputs. It works almost as a mult for sending a balanced signal to multiple amps or effects processors. This is especially useful when you’ve got limited I/O, and unlimited ideas to try. For example, you can send a guitar out of one input and use the Link feature to send it to an amp and an outboard compressor simultaneously.

The Reamp Station even looks cool, with a matte black finish appropriately suited for a studio environment. A dedicated rack kit is available to house up to two units in a 19-inch studio rack. I’ve got my two Reamp Stations racked up and ready to roll in my setup, and I believe every studio could benefit from a tool this handy. The Reamp Station is a no-brainer that’s built to last! 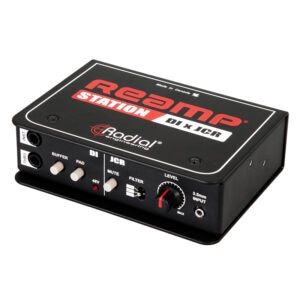 The Reamp Station combines two studio essentials in one chassis: an active DI box for pristine recordings of any instrument, and the JCR high-performance Reamper to feed those recordings to your guitar amps and pedals during mixdown.