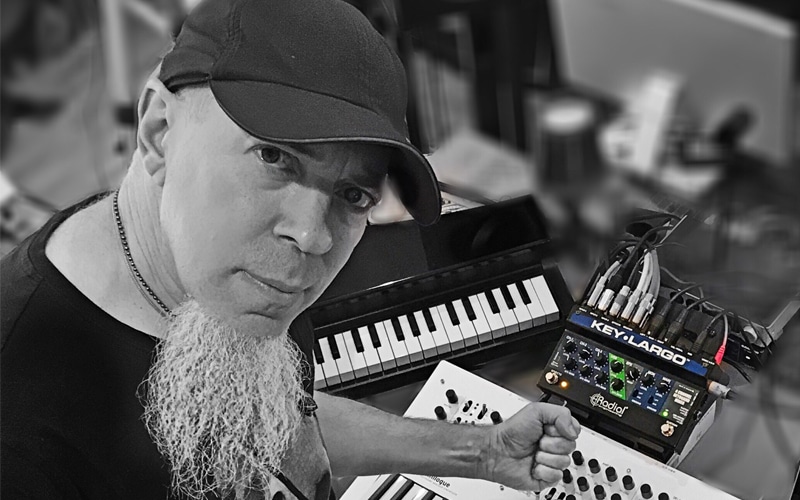 Arguably the most influential keyboard player on stage today, Jordan Rudess of Dream Theater has become the first artist to officially endorse the Radial Key-Largo: a combination keyboard mixer, digital to analog interface, and performance pedal.

According to Jim Rhodes (Radial Artist Relations): “Immediately after we announced the Key-Largo at the January NAMM show, Jordan contacted us to get a Key-Largo for his personal use. He said that it looked like the perfect keyboard mixer for his setup. As soon as the first unit came out of production, I grabbed it and sent it to Jordan to play with. His response was no less than jubilant. Not only did he send us a letter describing his experience, he also sent us a video to share with Radial fans. I think this level of support only serves to show how cool the Key-Largo really is!”

“The Radial Key-Largo is my new best friend! It’s hard to believe all the audio connectivity goodness inside this compact unit. After I plugged in 2 stereo keyboards, my stereo iPad and my Seaboard as well as a standard MIDI keyboard through the DIN port, all I could do was smile!”

The Radial Key-Largo is a compact mixer designed specifically for keyboard players. It features three stereo input channels for analog keyboards, a 24 bit/96k USB interface for a laptop to either play soft-synths or record, plus MIDI connectivity. There are two performance footswitches and a stereo insert jack for a volume pedal. The first footswitch activates the effects loop enabling the keyboard player to turn on or off effects on the fly. The second footswitch replaces a traditional sustain pedal when playing a digital piano. The insert point enables the Key-Largo to control swells when using a Hammond patch or strings. There are separate stereo outputs for mains and monitors. The monitor outs are ¼” TRS and ideally suited for powered monitors. The main outs are XLR and fully transformer isolated to eliminate ground loop hum when connecting to the PA system. Housed in heavy 14 gauge steel, the Key-Largo is made ‘Radial tough’ to handle the most demanding road use.