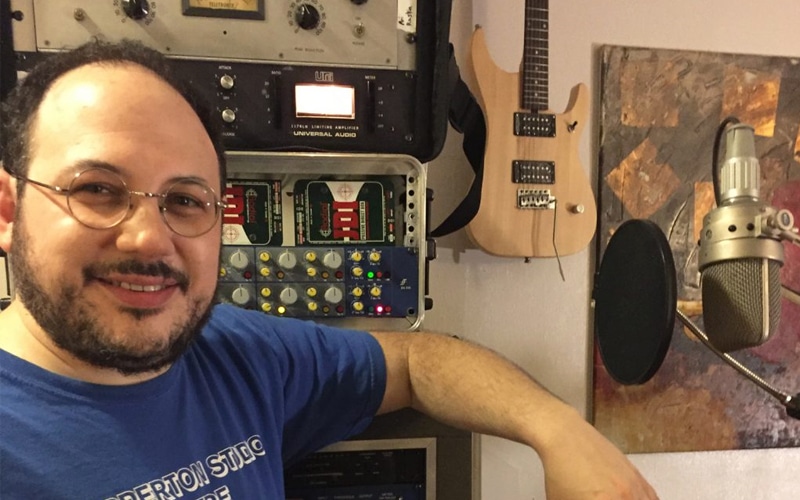 Manhattan based recording/mix engineer, producer and guitarist Ari Raskin has been busy co-producing and mixing a handful of tracks for drum/bass EDM band Break Science but took some time to talk about some of his staple studio gear choices and offers a snapshot of life as a successful freelancer.

Before Break Science there was (sticking with the B’s because the list is so long!) Blige (Mary J.), Beiber (Justin), Busta Rhymes, Black Eyed Peas… This is just a tiny fraction of the A-list talent Raskin has exercised his engineering A-game for. He hasn’t missed a beat (literally) since stepping away as Chief Engineer from Chung King Studios when it shut down operations in 2010. In it’s time, Chung King was the largest commercial music recording studio on the east coast. No longer having a home base to operate out of, Raskin transitioned his career wearing the proverbial “vagabond shoes”—with his gear bag in hand and knowledge of the NYC recording landscape. Raskin says: “I work all over the place. I probably do 50% of my work from my place, which is mostly for mixing and production and some light tracking. When I work with the major label artists, entourages and odd hours come into play, so most of the time that type of work is done out of one of the big commercial NYC studios. Sometimes artists have their own studios, and I’ll work from there, although artist’s studios can vary in quality, and so for mixing, and for certain other things, working out of my studio or a commercial studio ends up being a lot easier/better.”

When Raskin was setting up his studio over 10 years ago, he chose Radial JDIs in a shoot out. He recalls: “We ran the DIs into a vintage Neve 1073 mic pre. I remember that the JDI had a tiny bit less output than some of the others, but as far as sound quality, which is what matters, the JDI had a warmer sound, heavier low end, and sounded slightly more exciting and more “magical” than all of the other boxes tested. My JDIs are my go-to passive DI box for recording all active instruments and guitar pedals.”

Raskin’s studio is also outfitted with a Radial Workhorse Power Strip (500 Series 3-slot power rack) and he explains he uses a pair of EXTCs on almost every mix mainly for treating guitar pedals as outboard gear. “I’ve been [using guitar pedals as outboard gear] since I started engineering, sometimes not always interfacing properly but enough to get the job done, sometimes doing it more properly by using Reamp™ boxes and DIs and mic pres….but that’s always a messy, somewhat time-consuming setup. I’d been wanting someone to come out with an all-in-one, turn-your-guitar-pedals-into-outboard-gear box for a while, so as soon as the EXTCs came out, I got a pair. For the most part, I use them with my pair of Blue MXR 126 Flanger/Doublers, interfacing them with my Lynx Aurora 16 so I can use them as a stereo aux send/return when mixing. They can be heard on the song “Nervous Bird” by Lizzy Rose or “Drive” by Jenna Lotti.”

Raskin’s nod to Radial 500 series gear is high praise considering his caution for people who frequently seek his opinion on what gear they should buy. “They want to hear me talk about 500-series modules first. I think it’s a mistake to think 500-series stuff is always the best way to go or the first thing to own. I’m not a believer that a 500 rack is the first thing every engineer/producer/studio owner should have and that everything that’s 500 series is pro (but I know a lot of the semi-pro consumer market doesn’t think like me). I believe there are some great 500-series modules, and then there are some totally mediocre ones…and then there are full 19″ rackmount versions of the same gear that are way better.”

It’s clear Raskin has mastered the world of freelance work. An inspiration for not only those who seek his opinion and talents, but also for anyone who faces a shift in career structure. Raskin impresses with a casual mention of just a few of his latest projects. “I recorded a couple songs with Kendrick Lamar, recorded the vocals on an upcoming single from Kinky Boots Broadway star Stark Sanders, mixed a separate song for Cyndi Lauper and her son Dex, worked on an upcoming project with The Roots about 3 months ago. Tracked some vocals with R&B singer Trey Songz. Been tracking with a lot of young major label hip hop artists lately — I Love Makonnen, Travis Scott, Desiigner, D.R.A.M., Kamau, Migos, Famous Dex, Snow The Product and Murda Beatz…”

For more information on Ari Raskin