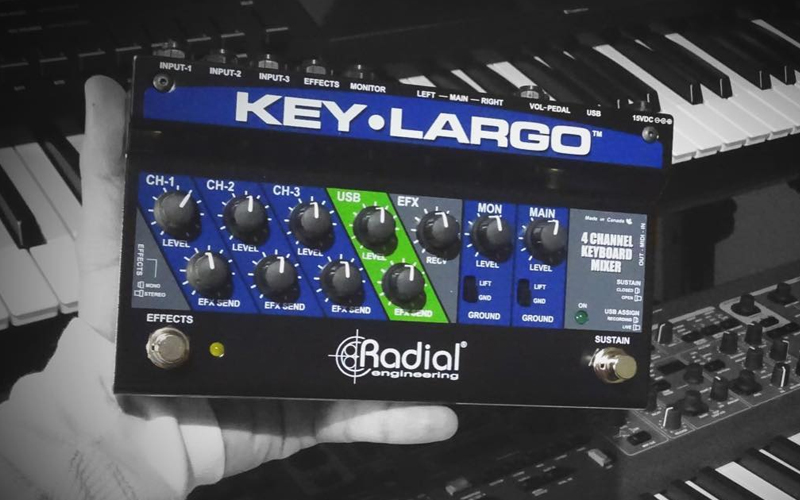 The following is a review by Rob Gee of Mixdown Magazine, published on November 30, 2017.

The team at Radial Engineering have once again proven that they know how to deliver compact devices that solve issues in your audio setup. It is usually guitar or microphone based devices that they come out with, so it is a pleasant change to see a unit designed for keyboards coming from Radial, as these guys don’t do things by halves. The Key-Largo™ is a multi-channel keyboard mixer and interface that brings your computer and keyboards together for a seamless live setup. This is, like so many other Radial devices, a very well thought out unit and one that will appeal to a lot of keyboard players.

It’s a simple enough notion, a compact mixer for your keyboards on stage rather than sending everything back to the front of house mixer on separate channels. This means that for most keyboard setups, you’ll just need a stereo pair running back to the front of house and you’re sorted. If you want separate monitors to the fold back sends, you can also send a signal directly from the Key-Largo to your monitors, with ground isolation separate to the front of house signal. It’s very clever in so many simple ways. You get three analogue input channels with volume and effects sends for each, and a separate channel being fed from the USB input taking audio from your laptop; finally, a device that brings your laptop audio into your keyboard setup without additional interfaces and DI boxes getting in the way. On top of this, the MIDI input on the Key-Largo acts as a feed to your laptop, so you can send MIDI notes from any of your keyboards to the computer and have the audio play back through the USB channel. It all comes together quite nicely and without any fuss once your drivers are installed.

Not finished there, Radial have included a stereo effects send that can be switched to a mono send and return so you can use guitar effects pedals with your keyboards for added spice. Every channel has its own send with a master return level on the mixer. You also have a volume send and return for integrating a volume pedal right off the Key-Largo, which then acts as a master volume for all keyboards connected. Then, you have the ability to run a cable from the Key-Largo to the sustain pedal connection of one keyboard and use the built in switch, negating the need for an additional sustain pedal. As convenient as this is, this is probably the one downfall with this unit as the push-button switch just doesn’t feel natural when used as a sustain pedal. I can imagine most keyboard players forgoing this feature, but that’s only a minor gripe. The rest of it makes perfect sense and brings together your analogue audio, digital audio and MIDI signals into one convenient hub on stage. You can balance the signals for your setup and simply send a single stereo signal to the front of house mixer. This way, you’ll always have the keyboard mix you want, with the ability to adjust it on the fly if need be. In all, this is another standout product from Radial Engineering and one that certainly fills a void.