Devin Malone relies on Radial for tour with Hunter Hayes 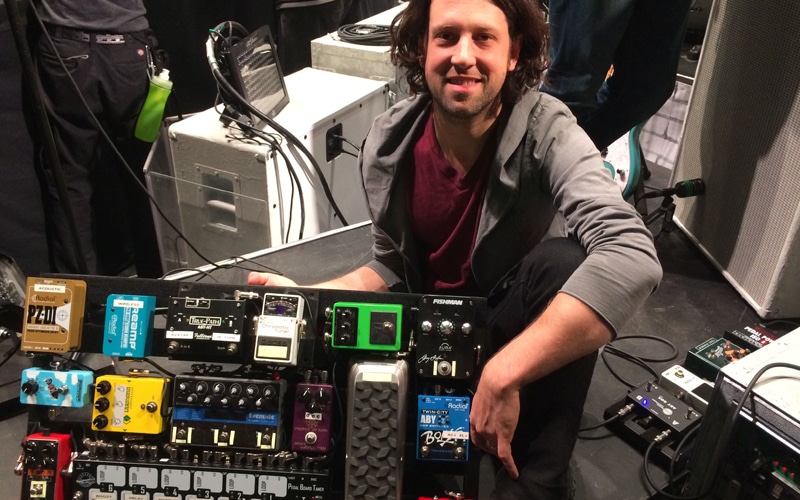 Hitting the road with young country star Hunter Hayes, Nashville based musician Devin Malone will cross the States and parts of Canada for the next several weeks. Like Hayes, Malone is a multi-instrumentalist but takes up guitar duties for this tour that launched March 20th in Kentucky.

Malone wrapped up some exciting projects just prior to packing up and heading to the tour bus. “In between Hunter’s busy schedule I have been able to work on a few other things I’m very proud of. I’ve been involved in a bunch of studio work that has resulted in Keith Urban’s latest single ‘Cop Car’, Will Hoge’s ‘Strong’ (also the new commercial campaign song for the Chevy Silverado), and ‘Dirt on a Road’- the debut single from a new band called Old Dominion.”

Part of the reason Malone finds himself in demand both in studio and on the road is that fact that he can play pretty much any instrument handed to him. In university he formally studied the cello but also plays mandolin, banjo, pedal, accordion and of course every type of guitar. “I’m just a music lover! I love to make music and sometimes the part you’re hearing just has to be on a different instrument so I’ve ended up teaching myself a few. That said, the bulk of my career has definitely been spent playing guitar. Also, I’ve found it really helps advance your career to have some other skills under your belt. If you’re being considered against a couple of other players but you’re the guy who can sing, or play steel, or mandolin on a song or two then you’re likely to get the call.”

Since moving to Nashville in 2005 Malone has been getting all kinds of calls, working with artists including Josh Gracin, Ke$ha, Holly Williams, Lobo, Tonic and most recently Hunter Hayes for the ‘We’re Not Invisible’ tour. Malone relies on Radial in studio and on tour and recently picked up another PZ-DI (orchestral instrument DI) for his pedalboard: “I’ve now got an A and B pedalboard out with Hunter with three Radial products each. Each board has a ProRMP (passive reamp) to receive the xlr from my wireless, a Twin-City ABY to switch between the acoustic and electric lines, and, of course, a PZ-DI for the acoustic line.” (At the time of writing, the Hunter Hayes tour team also purchased 6 JDI Duplex – stereo direct boxes – for the tour.)

Malone’s rig expanded to accommodate all of the various instruments he plays: “For years I had a JDI on my board for my acoustic line. I was very happy with it but I occasionally found a particular acoustic pickup system sounded terrible through it just due to an inherent impedance mis-match. The PZ-DI solved this problem for me with the switchable input impedance and also offered the low cut knob which I’ve found to be an incredibly marvelous tool for fighting feedback while retaining a full sound. Previously, I’d have the sound guys start pulling frequencies and what I was left with often sounded anemic. Now I just spin the knob up a bit and the problem is gone but the tone stays.”

“I’ve always loved Radial DI’s. In all my years of touring and playing clubs and bars I’ve played through just about every type of DI on the market. I noticed fairly early on that Radial products always sounded great and always worked. All the products are working flawlessly and I’m sure they will continue to do so!”