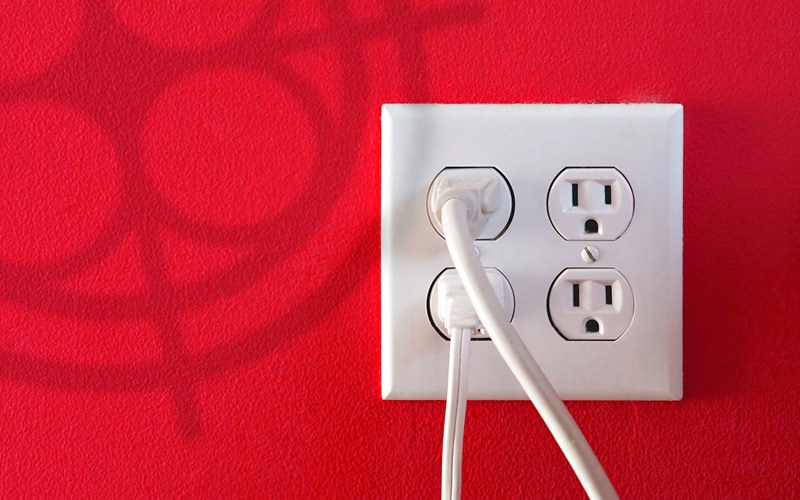 The release of the Power-1 is Radial’s first step into the world of rackmount power supplies and surge suppressors. But what exactly will this product line have to offer? On top of clean power, noise filtering, and added tidiness for your studio and stage setups, Radial Power units provide much-needed protection from power surges.

What are Power Surges?

In simple terms, a power surge is when there is an irregular high voltage spike occurring on an AC power line (which flows from an outlet). These surges happen very fast and can degrade — or even destroy — your valuable gear. Small spikes are more common and won’t fry your equipment on the spot, but they will ultimately shorten the lifespan of the device. Whereas it only takes one large surge to completely destroy sensitive components on a circuit board, and in some cases even start an electrical fire.

The majority of power surges arise from circumstances that originate within the building. Examples of internal factors include overloaded outlets, old and overused extension cords, faulty wiring, or the presence of high-power electrical devices on the grid (i.e. air conditioners, vacuums, refrigerators). You have likely experienced something similar to this firsthand. For example, if you’ve ever flipped on a vacuum or hairdryer and noticed the lights dim for a moment, there was just a small surge.

However, the most damaging power surges come from external environmental factors. The most common example would be a nearby lightning strike. Any interference with power lines (ex. from overgrown branches) can result in a power surge as well. These types of surges can leave you turning on a device after a storm, only to find that it’s no longer working. That is unless you had some sort of surge protection present. 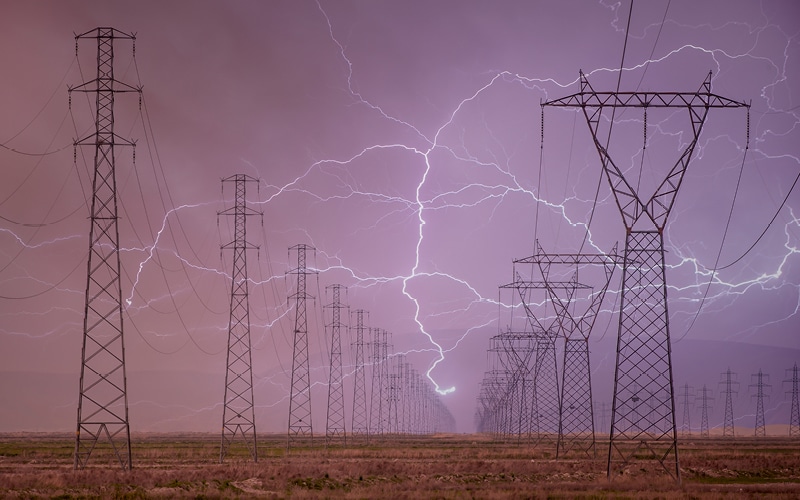 How Radial Protects your Gear.

The key component in a Radial Power unit that protects connected electronic devices from power surges is its high-quality MOV or Metal Oxide Varistor. This part acts like an airbag in the Surge Protector to take the “hit” of the high voltage spike before it reaches your gear’s circuit board, preventing damage from occurring.

What is a MOV?

A MOV is able to automatically change its internal resistance in response to incoming voltage spikes. This is hinted at in the name ‘Varistor’, which is a combination of the words variable and resistor. Once the incoming voltage crosses above a certain threshold, the MOV becomes a voltage-clamping device that stops the spike from passing through to any connected equipment.

This is similar to how an audio limiter works when recording music: when the input signal crosses a designated upper threshold, the limiter kicks in and prevents any signal above that threshold from passing through. The MOV behaves in the same way, except instead of limiting an audio signal to prevent clipping or distortion, it limits the voltage coming from your AC power line to prevent damage to sensitive gear connected to the outlets of the Power unit. 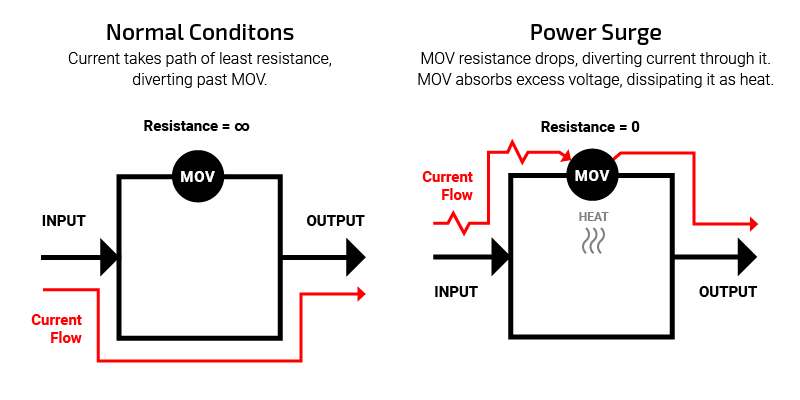 The Varistor in the Power-1 uses a metallic oxide for its resistance material, making it a Metal Oxide Varistor. This is superior to standard Varistors because it is able to clamp down on voltage spikes faster, is more effective at ‘absorbing the hit’ from short-term spikes, and is also capable of handling higher energy levels before failure. As opposed to a fuse that needs to be replaced once it does its job, the Power-1’s MOV will automatically recover after all but the most extreme power surges, so you can continue to power your gear without worry for years to come.

A key differentiator between Radial Power units and other power strips in the market is the quality of the MOV. Radial employs made-in-USA MOVs that are more likely to provide full protection for a longer duration than the average suppresser from a hardware store. Additionally, all Power devices feature an LED indicator that displays the status of the MOV, so you’ll always have peace of mind knowing your gear is protected.

Power surges are a relatively common occurrence that can happen in both home studios and professional venues. They have the ability to wreak havoc on your valuable audio gear. This makes it important to include a high-quality surge suppressor as a key component in your gear collection.

The Power lineup of surge suppressors and rackmount power supplies feature the hallmarks of all products from Radial Engineering: rugged build quality, reliability, and superior design. Plus, Radial Power devices offer the added benefit of providing clean power and filtering noise radiating from power lines. Special attention has been paid to the critical internal components, such as the Metal Oxide Varistor, to ensure that even in the most extreme scenarios your gear is protected. Countless musicians, engineers, and audio professionals around the world already rely on Radial to deliver great results when it comes to their audio signals, and you can expect that same standard when it comes to safeguarding your gear from power surges. 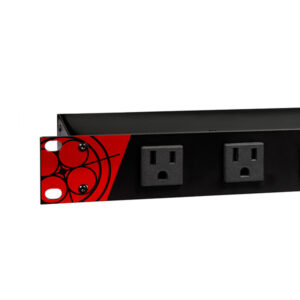 The Power-1 provides filtering against interference along with peace-of-mind surge protection. 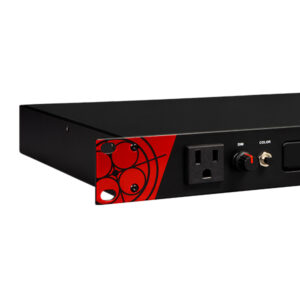 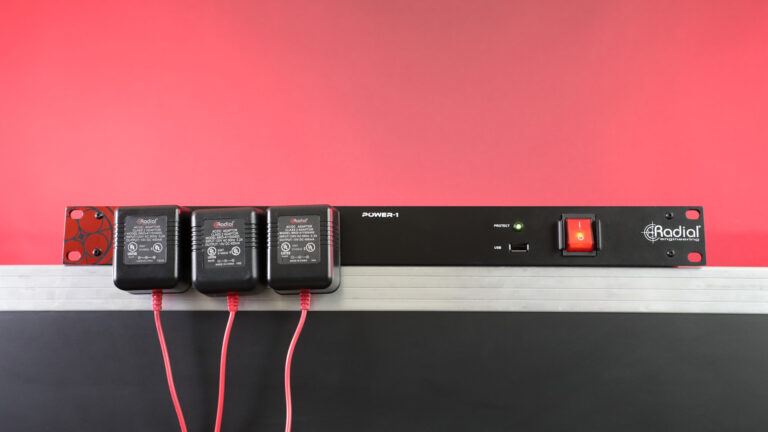 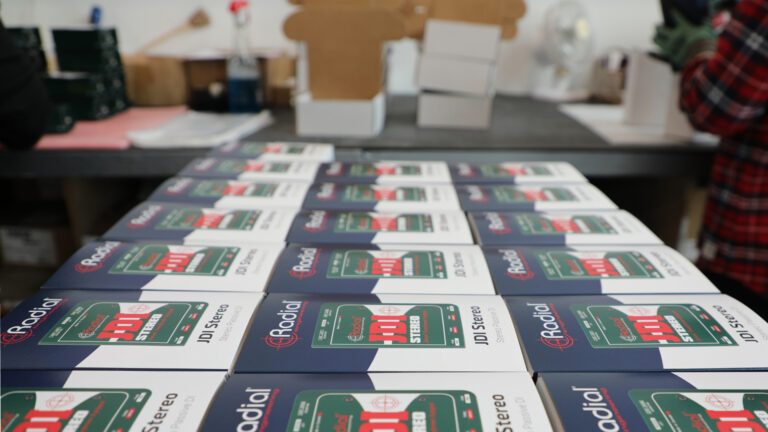 How to build the world’s most reliable DI