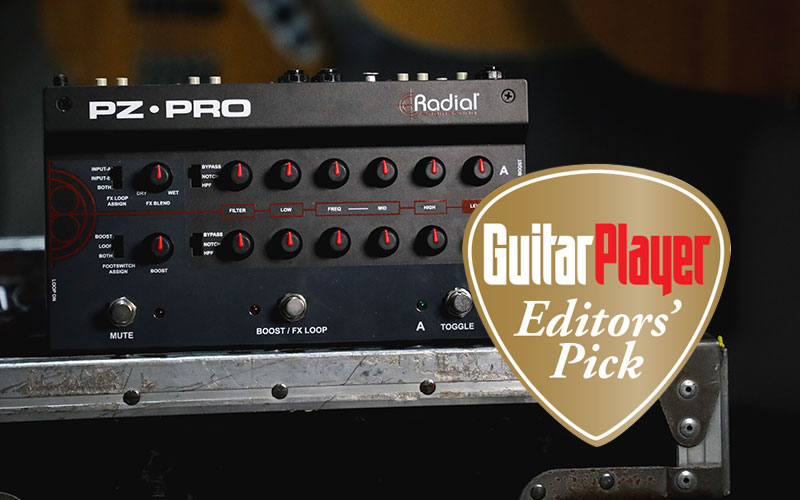 The following is written by Jimmy Leslie from Guitar Player. Read the full review here 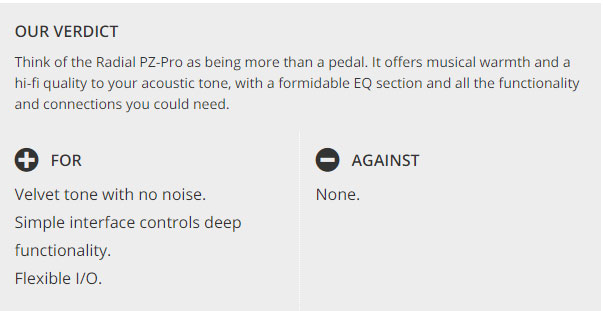 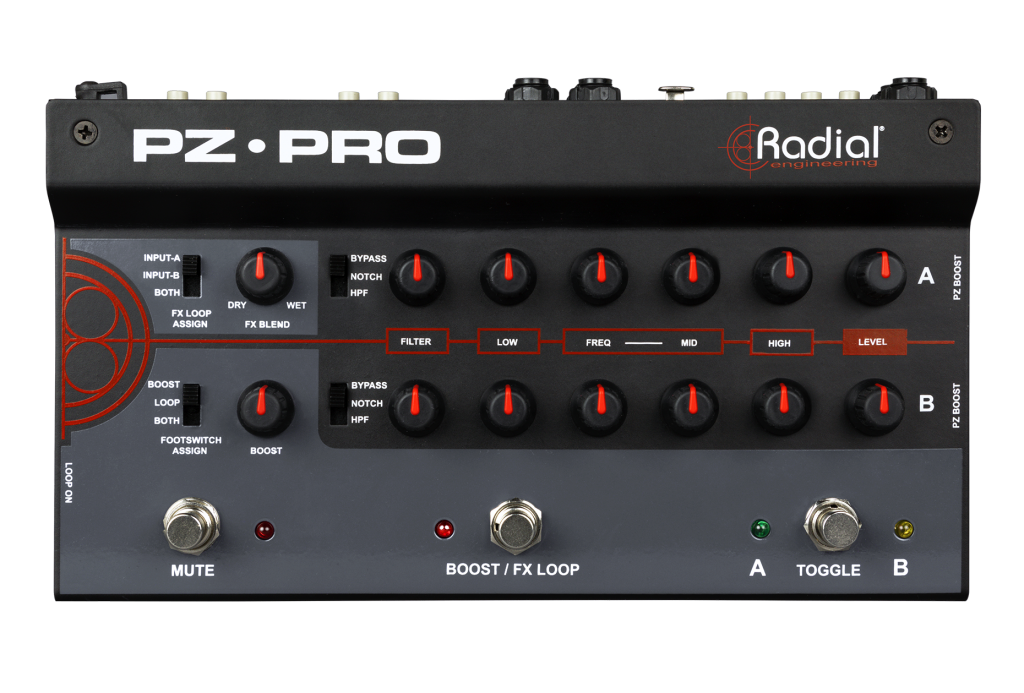 Radial is renowned for its direct boxes and preamps, and now the company has given its entire Acoustic Series lineup a cosmetic redesign to match its sleek new flagship model, the PZ-Pro.

The acoustic preamp offers two channels with independent EQ, an XLR input option on channel B, and an effects loop assignable to either or both, plus a bevy of handy features for acoustic enthusiasts, including a clean boost with adjustable level control.

Together, these features allow you to optimize levels and tones for two input sources, making it easy to alternate between or blend them. According to product manager Jay Porter, the PZ legend originated with a prototype sent to James Taylor, who had just finished recording an album.

The PZ-Pro’s core sound is warm and smooth, like a high-fidelity studio mixing board. Rather than adding a ton of color, it provides a high-definition platform for the instrument’s true sound to shine through

He reportedly dug the sound of that original PZ-Pre so much that he went back and re-tracked the entire record. Radial’s PZ preamp production line now includes the PZ-Pre, PZ-Deluxe, and this ultimate incarnation.

I always bring at least two guitars to a gig, so it was exciting to do one with the PZ-Pro in tow. Pro is the operative word. Having this pedal made everything come across more smoothly, from the sound itself to the transition between tunings and instruments.

I brought two very different Taylor guitars: an older 514ce and a new Builder’s Edition 816ce. I also had a chain of L.R. Baggs Align effects pedals, a Boss tuner, an AER Compact 60/3 TE, and a Baggs Synapse Personal P.A. I sent the 514 through channel A and the 816 through channel B.

The amp output ran to the AER while the XLR out went to the P.A., and the gig was quickly underway. I appreciated the PZ-Pro’s sturdy construction and straightforward layout.

All the surface controls are old-fashioned knobs and switches that are well labeled and easy to understand. Inputs and outputs are all on the back panel, so I was able to keep my cabling tidy and place the other pedals and expression controls in ideal locations.

The simple pleasure of seamlessly switching back and forth between guitars felt wonderful and made me think that perhaps next time I’ll add something else to the mix. The PZ-Pro can accommodate a variety of acoustic instruments, and the recessed impedance boost button on the side is ideal for those with traditional low-output piezo pickups.

The XLR input with phantom power on channel B is designed to accommodate clip-on condenser mics, which are popular with banjo and mandolin players. The PZ-Pro’s core sound is warm and smooth, like a high-fidelity studio mixing board. Rather than adding a ton of color, it provides a high-definition platform for the instrument’s true sound to shine through.

Radial Engineering’s PZ-Pro is more of an acoustic command center than a simple pedal
The next level of tone is available via excellent equalization, and small adjustments to the high, low, and mid controls work wonders. Practically every acoustic instrument has some weird midrange honk that needs to be rooted out, and the freq knob makes it easy to home in on offending frequencies.

I had the smaller 514ce Grand Auditorium in an open lowered tuning, so dialing in its midrange was very different from the larger 816ce Grand Symphony, which was tuned standard. 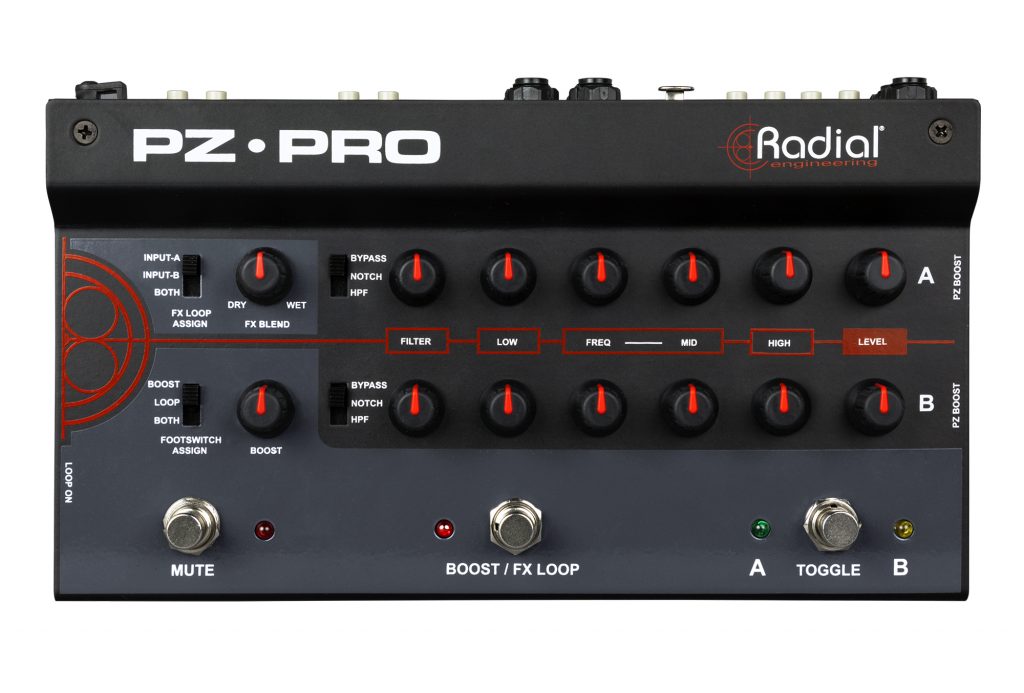 The ability to set the overall filter as a notch or high-pass, or to bypass it altogether, is another boon. For example, the old-school Fishman Prefix preamp on the 514ce has its own notch filter, so I used the PZ-Pro’s as a high-pass to eliminate low rumble. Meanwhile, the ES2 system on the Taylor 816ce doesn’t have a notch filter, so I used the PZ-Pro as a notch on that channel.

The 514ce has a Seymour Duncan Active Mag installed in the sound hole as well, so if it were the only instrument on the gig I would have utilized the sum function to activate both channels simultaneously, using one set of controls for the Duncan and the other for the Fishman. It’s always nice to have options.

I encourage any acoustic player with multiple instruments or dual input sources to give the PZ-Pro an audition. Radial’s new flagship preamp/direct box certainly raised the level of my gig
Radial Engineering’s PZ-Pro is more of an acoustic command center than a simple pedal. Serious players will appreciate all that it has to offer in sonic quality, connectablity, and flexibility, as well as its roadworthy construction. If you’ve ever wondered how an elite artist gets a superior acoustic-electric sound, it often starts with a quality preamp.