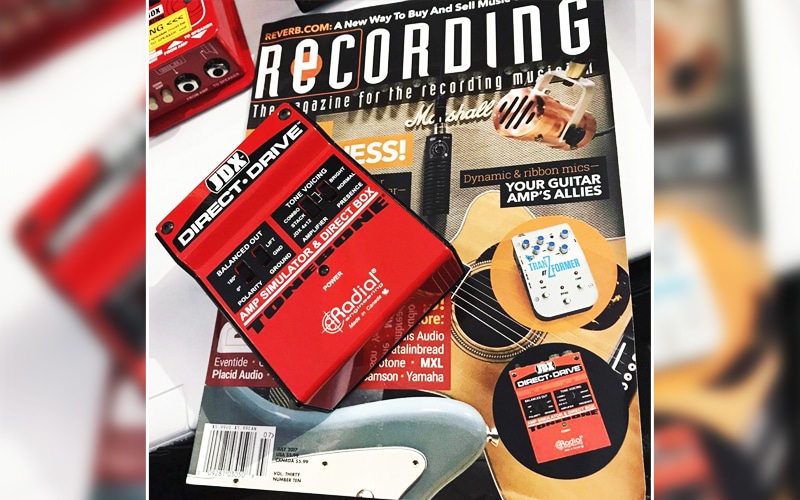 The following is a review written by Alex Hawley in the July 2017 issue of Recording Magazine.

Radial Engineering is well known for its collection of studio and live gear that can accomplish just about any I/O situation imaginable. The Radial JDX Direct-Drive™ does double duty as an amp simulator and direct box—it can run in conjunction with an amplifier, or replace the amp altogether. With working guitarists in mind, the JDX Direct-Drive allows the flexibility to have great tone at every gig without having to travel with an amp and maintain it on the road. From the convenience standpoint alone, it’s a potentially invaluable addition to a guitar player’s gear list.

While amp/cabinet modeling is not a new concept for guitarists, the JDX Direct-Drive has a unique approach. For one, it is completely analog—no digital glitches, no software updates, no hours spent setting up presets the night before a gig. Analog modeling translates to reliability, consistency, and the ease of ‘plug-and-play’. Also, it’s just as small as any other pedal on your board. As a guitarist, I work hard to build a pedal chain that works for what I need and nothing else. I love the fact that Radial kept things simple rather than piling on other effects for an “all in one” approach.

The top panel has a set of four switches to change between the available settings. The polarity and ground lift switches on the left side correspond to the XLR balanced output, and the tone shaping switches on the right side select Amplifier and Presence.

The amplifier section has three different voicings. The first setting, JDX 4×12, starts with Radial’s signature JDX tone, based off of a Shure® SM57 in front of a Marshall® 4×12 cabinet. This selection will give the sound of a miked cabinet without adding the character of an amp. The Combo setting is modeled from a Fender® Twin amplifier, while the Stack setting is based on a Marshall JCM series head. Each of these voices can be shaped a bit further using the Presence switch, which toggles between Normal and Bright. 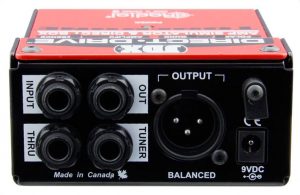 Like nearly all Radial products, the JDX Direct-Drive is made with 14-gauge steel throughout. It’s built like a tank!

Plugging in
During this review, I played my G&L® ASAT Deluxe, which is a semi-hollowbody Telecaster style guitar armed with Seymour Duncan® JB & ‘59 pickups. The pedalboard I put together for testing starts with a Strymon® OB-1 Compressor, into an Emerson Drive, a Wampler® Ecstasy Overdrive, and a Strymon BlueSky Reverb.

The JDX 4×12 setting sounds just like you would expect if you ran your pedalboard straight into a closed back 4×12 cabinet without hitting an amp—it’s clean, with a bit of the low-midrange growl that’s characteristic of Marshall 4×12 speaker cabinets. The JDX Direct-Drive translates surprisingly well with a full pedalboard driving into it, too. If you like the character of your pedal chain, the 4×12 setting gives you a natural feel of playing through a speaker cabinet with the character of your pedals being the main shape. Adding some dirt with the EM-Drive and Wampler Ecstasy, I got a pretty overdriven tone that was bright and punchy. There wasn’t quite as much character as I might have wished for… but there were two more amp models to try!

The Stack setting surprised me. While it’s tough to give a comparison next to a full-on Marshall JCM head, the JDX Direct-Drive delivers a very functional and natural tone. It sounds rounder than the JDX 4×12 setting, but it didn’t add any additional grit like I was expecting. It has a similar character to that of a Marshall running cleanly—a healthy bottom end, with an even midrange and top end. When using Stack, I tend to reach for the Bright Presence setting, which adds a nice bite.

The last amplifier setting is Combo, shaped in the image of a Fender Twin and delivering a great midrange emphasis. Overall this setting sounds much brighter than the Stack setting, with plenty of bite and punch. It sounds awesome with just a little bit of dirt added—just before breakup. Combo was my go-to setting for most purposes; it sounds very rich. I typically left the Presence setting to Normal, as this model sounds pretty bright without adding anything extra to the top end.

Final thoughts
The biggest thing for me with amplifier emulations is getting a sound that’s natural and translates well in a performance setting. The JDX Direct-Drive does a great job with this! I love its all-analog simplicity, and it’s been easy to travel to rehearsals with nothing but my guitar and pedalboard, with the JDX Direct-Drive comfortably mounted next to the rest of my pedals. I haven’t had to lug my Fender Twin around (if you have a bandmate with a third-floor rehearsal space, you know what I mean!), and it really saves on setup and teardown time. I wouldn’t hesitate to bring it on the road for gigs, either.

The three amplifier settings are brilliantly shaped to give you a ton of mileage. It would work great for gigs that require flying, or even just to keep on your board as a backup for when one of your tube amps inevitably requires maintenance at some point on the road.

For guitarists who don’t typically use pedals in their setup, I would hesitate to rely solely on the JDX Direct-Drive to get your tone on a gig. While it can be used as a very full and versatile DI on its own, the analog amp modeling really shines when it’s interacting with the pedals feeding it. In the studio, I see it being put to good use for DIY recording environments, where miking an actual 4×12 isn’t an option—say, at 2 AM with a sleeping baby in the next room.

For the price, this should be an instant pickup for working guitarists. While it won’t replace your tube amps, it is a great tool that you’ll likely reach for more often than you think.

For more on the JDX Direct-Drive.