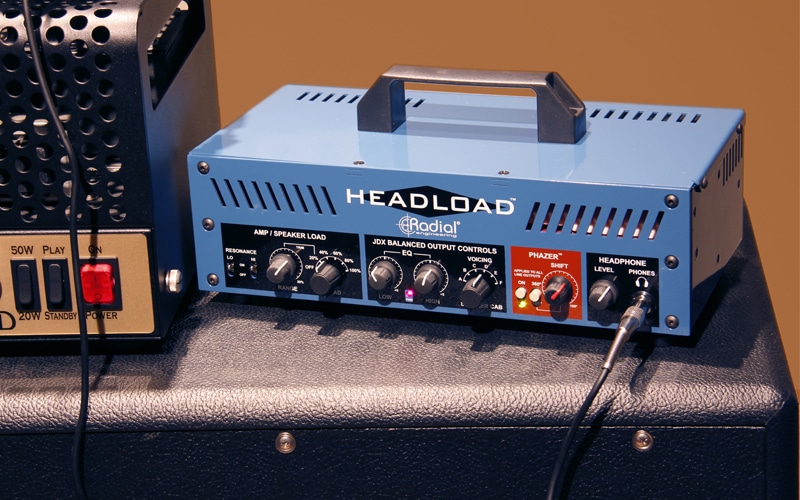 The following is a review by Russel Cottier originally published in the 2017 Jan/Feb issue of Resolution Magazine.

In the pro-audio world it is unlikely that many will have never seen a Radial product. The seemingly bulletproof Radial DI, splitter and Reamp® boxes seem to be standard issue and with good reason since they offer quality and reliability. This of course was always the intent of founder Peter Janis. Having released their first DI box 20 years ago, Radial now bring to the table a problem solving guitar box with all sorts of functionality.

The Radial Headload™ is a combined guitar amplifier load box, DI box, speaker simulator and headphone amp all in one rugged chassis. Looking somewhat like a blue enameled metal vintage lunchbox with a handle on the top, the unit can be placed either on top of the amplifier, or can be racked up for a touring rig.

For the uninitiated it is important to note that a desirable distortion can be achieved by overloading the power stage of a valve amplifier. However due to the fixed-gain nature of this final stage in most amplifiers the output can be excessively loud. However, power tubes really don’t like not being plugged into a speaker or resistive load, so this is where load boxes such as the Headload come in.

The unit has four rubber feet, yet annoyingly these are just too short to sit the unit over a normal amp carrying handle, so placing the Headload on top of an amp is somewhat awkward. Headload is powered by a four pin Neutrik XLR connector with an external in-line power supply. Speaker cables run from the rear of your guitar amplifier to the unit and then to either one or two speakers. Radial make every effort to remind the user in the documentation that it is important to make sure a speaker cabinet is plugged in at all times to avoid damage. There are a variety of impedance versions available: 4 Ohm, 8 Ohm and 16 Ohm, to suit your amplifier and cabinets. The unit is heavily vented, and contains a fan, so care must be taken with airflow.

The front panel sports a large Headload logo and four sections of controls. The AMP / SPEAKER section contains two miniature toggle switches for a two-band resonance boost, LO and HI. These seem to give a further presence and resonance boost as you might get with an amplifier. There is a six position rotary LOAD selector which allows selection of either OFF or 20% increments of feed to the speaker. The adjacent, robust feeling rubberised RANGE pot is used for trimming down to 1% when the selector is at the 20% position. In practical terms in the studio I didn’t get much above 40% on cranked 100W heads. And for playing in the room with the amplifier the RANGE control was invaluable. As with most Radial equipment all switches feel great quality and seem like they should last for years to come. The OFF position cuts power completely to the speaker, however Radial remind us that if accidentally switched from this position, damage could be caused if the speaker is not connected.

The next section is the JDX™ balanced output control section. This is essentially a speaker cab voicing circuit. The original standalone JDX unit monitors the back EMF from the cabinet and applies some tone shaping to create a more realistic speaker sound. How this is influenced by attenuated and off modes was not obvious, but is doesn’t seem to degrade the sound when the speaker is not active.

The JDX speaker voicing is primarily designed to be used to feed stage monitors. If you are looking for impulse response style emulation then there are more appropriate products on the market. However the speaker emulation does make a standard floor wedge monitor feel more like a guitar amplifier. This seems to be achieved via analogue means and perhaps that will lead to the product having a longer lifespan, albeit at the expense of cabinet thump and general realism. Radial have added a further five speaker voicings compared to the original JDX box, selectable with a rotary switch, plus there are High and Low EQ knobs. The range of this EQ is fairly broad and a variety of tones or monitor wedges can be accommodated for.

Surrounded by a red painted box, the PHAZER section controls allow users to phase shift the output between 0° and 360°, in order to align the output signals with a cabinet mic. A red LED shows when the Phazer engage button is depressed. There is a knob to continuously control phase and an adjacent (polarity) button to select the sweep, either 0° to 180° or 181° to 360°. In a concert situation the front-of-house engineer is likely to have little access to this so it is really a process to be undertaken at soundcheck with the hope that the mic will not be nudged. However it proved very useful in the studio, including for manual phase sweeping effects.

Finally to the right of the front panel there is a 1/4” TRS headphone socket with a powerful headphone amp for silent playing. The JDX EQ and speaker voicing is applied to the headphone feed and there is knob for level. The rear of the unit has the power supply connector which locks in with a satisfying clunk. You don’t want to be running the unit without power since it may cause damage. Above are a couple of inputs on 1/4” TS jack, one of which will be blanked off depending on the model of Headload. Adjacent to this are A and B outputs for speakers, again 1/4” TS jack sockets.

The unit has outputs for the JDX DI section, one output Pre-EQ (and speaker voicing) designed to go to front-of-house and a Post-EQ and voicing feed for monitors. Both are balanced XLR outputs and offer ground lift switches, there is also a polarity flip button on the isolated Pre-EQ output. These outputs are mirrored opposite in the form of unbalanced 1/4” TS jack sockets and conveniently a level control knob is included that allows trimming.

In practical use, the Headload sounds very much like one would expect from a 120W guitar amp load box. There are no fancy channel switching options like on certain other load boxes but the reactive load system does seem a little more accurate than some others. Single stage clean amplifiers tended to achieve a crisp top end when cranked. Even amps with master volume controls had that little extra brought out of them at a high gain settings, with the power tubes giving a little smooth sparkle and some thickness.

From an electronics standpoint many would argue that a Variac would be a better approach with regards to power tube longevity, but the Radial Headload will definitely tick all the boxes for many. In practical terms for studio use The Headload can be kept in the control room and feed a cabinet in the live room. So the perfect volume can be selected remotely. Also running the direct output into a speaker cabinet impulse response loader plugin proved a very effective recording workflow. Retailing at £1099 the Radial Headload is on the more expensive end of the market but includes several extra functions not available elsewhere. The leading competitor at this price point, Two Notes, approach the problem in a more digital manner with their Impulse Response digital load boxes. But the Radial name is synonymous in the industry with robustness so this box might just be right for your studio or next tour.

For more on the Radial Headload.