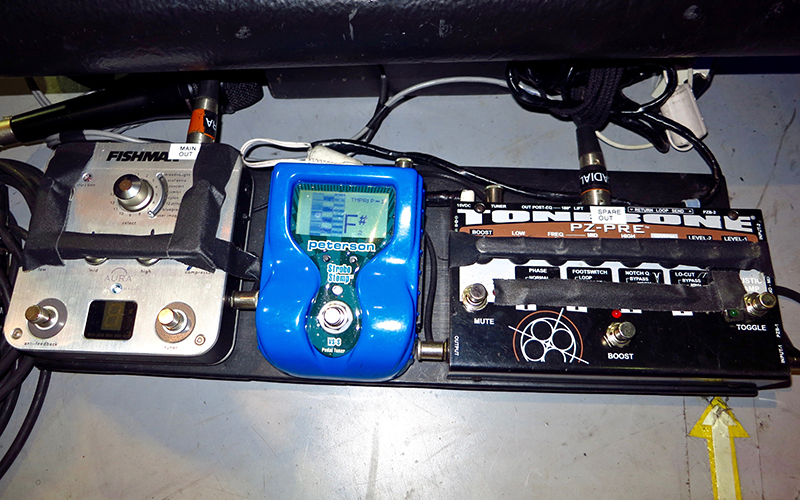 The following is an article written by David Morgan and was published in the August 2016 (14.11) edition of FOH Magazine. David is the FOH Engineer for James Taylor, Seal, Five For Fighting, Steely Dan, Paul Simon and many others.

A friend of mine in Vancouver, Canada, occasionally sends me surprises that are always very cool. These products are never big and loud, nor are they flashy and expensive. The items that arrive from Peter Janis at Radial Engineering are colorfully packaged, yet always contained within a simple metal box. Each product is of the highest quality and extremely efficient in accomplishing its particular application.

Since its inception in 1996, Radial Engineering has always displayed a genius for identifying a need and then filling it with the best possible solution. The Radial line of direct boxes provides a wide variety of signal conversion solutions, and these versatile products are the only DI interfaces we use on the James Taylor tour.

My introduction to Radial products came via word of mouth as the live sound industry became aware of the big sound that was coming from the little green Radial JDI™ boxes. These units feature top-of-the-line Jensen transformers and Radial circuitry that produce a superior audio output.

I started using transformer DI devices years ago on complex keyboard rigs to take advantage of the isolation from hum and buzz that transformers inherently provide. On the James Taylor stage, we employ only two individual electronic keyboards that are each connected directly to the JDI units. We still choose these transformers for the quality of uncolored, undistorted audio they output. The increased headroom and the natural soft compression characteristics exhibited by transformers make this Radial product a perfect choice. The JDIs are cleanly handling the various outputs emanating from our two band members, keyboardist Larry Goldings and trumpet/keys player Walt Fowler and their Yamaha Motif keyboards.

We use only one Radial J48™ active DI box on the tour, but it plays a very important role. James plays a wireless Tarheel Blue Telecaster on the song, “Steamroller.” Guitarist Mike Landau, guitar tech Jon Prince and I collectively (well… mostly Mike) programmed a Line 6 rack mounted Pod Pro to pretty accurately simulate a punchy older Twin Reverb sound. With its clean, powerful output, the J48 completes the signal chain in every respect. The combination of features provided on the input and output panels plus the innovative electronic design make the J48 an indispensible tool. 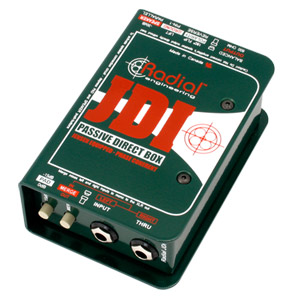 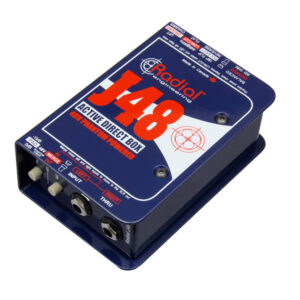 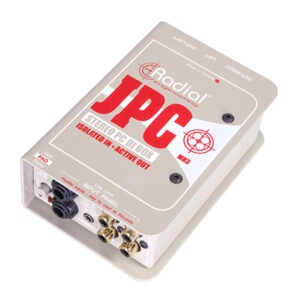 The Radial JPC is an active stereo DI with transformer isolated inputs to eliminate noise that is common with computers and consumer audio devices.

We also venture into 21st Century computer devices for some special effects featured on two songs. “Sun On The Moon” requires an iPad to play back a prerecorded syn-drum part. Neither drummer Steve Gadd nor percussionist Luis Conte use any electronics for their sounds. So, our bassist/musical director Jimmy Johnson triggers the stereo track with the additional percussion. We have crowd noise and baseball special effects for the song “Angels Of Fenway” playing from a second iPad triggered by Walt Fowler. We also use Jimmy Johnson’s laptop to play back archived arrangements of songs that James asks to try out at sound check. For each of these tasks, we employ the Radial JPC™ stereo direct box.
The JPC direct box is a fairly recent addition to the Radial product line that provides the best interface and the greatest protection for a laptop, tablet or smartphone headphone output. The JPC is a great Swiss Army Knife DI that provides multiple pairs of input connectors that can address almost every output connection commonly used for computer audio outputs as described in the user guide:

“A choice of 1/4-inch, 3.5mm and RCA input/thruput connectors make interfacing a snap with all types of equipment. A single switch inserts a -15 dB pad into both channels, two power LEDs (one for each channel) confirm 48V phantom is turned on, and a pair of XLR output connectors round out the feature set.”

While the active circuitry performs the impedance matching and line balancing, 1:1 transformers isolate the JPC input stages from the 48V phantom required to power the DI. The JPC provides high quality audio output from almost any device with a high impedance unbalanced output, but protects expensive laptops, tablets and phones from any potential electronic dangers. Once again, Radial’s genius for noticing a void in the product market and filling it with an exceptional tool becomes immediately apparent.

One of my favorite solutions to an often-overlooked problem comes from the Primacoustic side of the Radial family. This wing of the company specializes in acoustic solutions for physical space audio problems. Primacoustic makes diffusers, absorptive units and isolation systems. One of their most inspired creations is the KickStand™.

This intelligent device is constructed from 3/8-inch heavy steel plate that rests on a solid rectangle of thick, high-density acoustic foam and supports any standard boom arm. This unique mic stand very effectively eliminates low frequency resonances from drum risers or staging structures on which the kick mic is placed. When this product was first delivered to my door, I was amazed at how heavy and massive it felt. The first time I had an opportunity to audition the KickStand using a Beta 52 microphone, I became an instant believer. The sound of the kick drum when mounted to this unit immediately becomes tighter, deeper and punchier. I wish this elegantly simple solution had been available 25 to 30 years ago when I asked the Paul Simon stage crew to fill the areas below drum and percussion risers with large blocks of foam augmented by huge bags of foam rubber chips in order to deaden low frequency resonances. The KickStand method of acoustic isolation is far more effective and provides much better results. Our well-worn KickStand has been an essential part of Steve Gadd’s live drum sound ever since I opened up that heavy box from Canada.

The most essential piece of Radial gear we carry is the PZ-Pre™ acoustic guitar preamp that amplifies the signal from the Baggs LB-6 pickups that are mounted in each of James Taylor’s Olson guitars. This is yet another piece of gear Peter Janis spontaneously asked if I wanted to try out, explaining that the electronics of the preamp/DI had been optimized to produce the best match for the output of a piezo pickup — in both impedance matching and frequency response. As described by Radial:

“Each PZ-Pre input features a special piezoelectric pickup (piezo) buffer called the PZB that can be switched into the signal path when needed. The PZB allows a passive piezo pickup to be connected directly to the PZ-Pre without the use of a separate preamp. The PZB increases the gain while elevating the input impedance to 10meg Ohms. This ensures that the piezo pickup “sees” the optimum input impedance for signal transfer, which will result in better tone.”

In 2005, we began using the Fishman Aura® system for the Olson® guitars that James has played for the last 25-plus years. Jim Olson includes a Baggs LB-6™ in his beautiful instruments. We all agree that the LB-6 is an excellent saddle pickup, but we are always searching to achieve a more natural acoustic guitar sound. The Aura system on each Olson guitar has moved us much closer to that goal. But James wants to hear a more ambient sound from the Aura on stage than I do in the house mix. As a result, I started taking the DI output from the Peterson tuner that sits next the Aura so I could dry up the FOH sound. That solution worked until we started doing the “One Man Band” shows in 2006.

The shows on this tour featured James playing acoustic guitar with only keyboardist Larry Goldings accompanying him on stage. During this tour, Peter Janis sent us the PZ-Pre. Introducing the ToneBone into the signal path created an immediate difference in the signal quality. Both the DI output from the PZ-Pre and the output from the Aura sounded bigger and more natural with noticeably less of the “rubber band” sound that James always hopes to eliminate. The PZ-Pre has remained on the stage for the last 10 years because the superior electronics package from this Radial design has provided a rich, detailed sound that brings us closest to reproducing the sound of the Olson instruments.

This year, we started using the smaller version of the ToneBone preamp, the PZ Deluxe™, in violinist Andrea Zonn’s rig. She also plays through an Aura system using a piezo pickup in her fiddle. The PZ Deluxe has fewer onboard features than the larger PZ-Pre, but contains the same electronics packages in the input and output stages. It was a natural choice when Andrea said that she wanted to experiment a bit with the violin sound. As soon as we installed the Deluxe, the same jump in signal quality occurred in the violin sound. In order to successfully use this combination of gear, the DI output from the PZ preamp needs to be delayed to match the latency in the Aura system. Most digital consoles have this capability on each input strip.

Our James Taylor shows are all about realism, and we have taken another step closer with this significant upgrade to Andrea’s violin sound. In our particular situation, we don’t take advantage of all the extra features one can access on the PZ units, but we are extremely satisfied with the electronic performance of both ToneBone products on our stage. I hope Radial never stops surprising me with their “must have” devices. 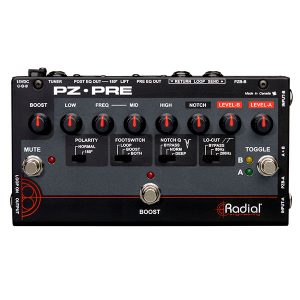 The PZ-Pre is a power-packed preamp that lets you switch between two acoustic instruments and feed the PA with a built-in Radial direct box. Piezo optimized for orchestral instruments. 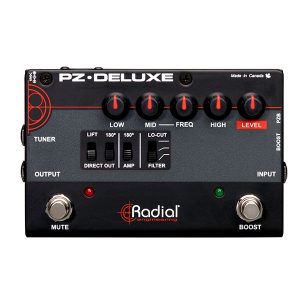 The Radial PZ-Deluxe is a studio quality instrument preamp that jam-packs a full array of features into a compact pedal for live stage use.