What Makes a Great Overdrive? 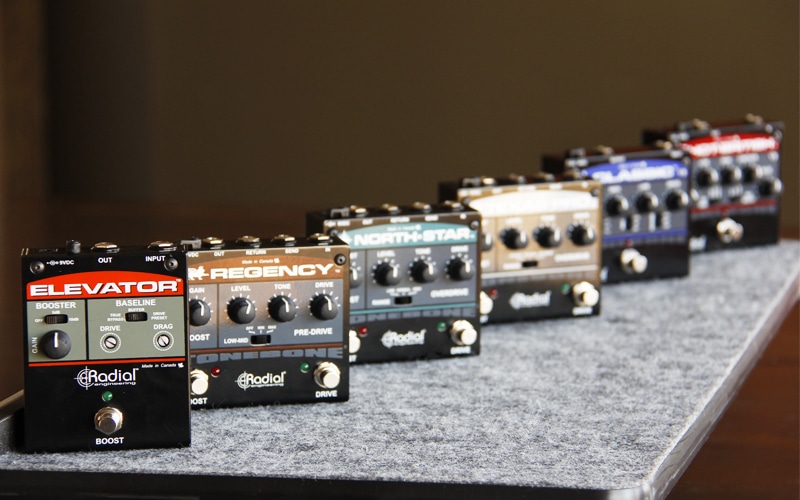 Thank you for visiting the Radial Blog! Here you will find information about emerging Radial products and articles explaining how to get more out of your gear. In appreciation of your time, this post will first explain the various qualities of a great overdrive pedal and then will give you an exclusive first-look into some unannounced stomp boxes that will be added to our Tonebone line.

Pictured above is the new series of Tonebone pedals. Starting from the left is the Elevator™ which is a clean boost. It then moves to the Regency™ and as you navigate to the right, you get a pedal with more and more distortion. Each Tonebone pedal is focused towards delivering a certain benefit, yet each one (for the most part) has sufficient range to cross over into the other territories.

Today, there are literally thousands of distortion and overdrive pedals to choose from and making a decision can be overwhelming to say the least. So how do you choose? Or more to the point, what differentiates one from another?

Over the past 15 years, one of the key attributes that have been engineered into each Tonebone pedals is range and flexibility. This of course is a double-edged sword. With flexibility comes the chance that a guitarist will get into trouble with a Tonebone. But there is a tremendous up-side: with flexibility, this means that with a single pedal, you can find your voice and develop your tone as your playing evolves. Look no further than Jeff Beck–a player whose tone has evolved over his 40 plus year career. Powerful controls let you make slight adjustments to refine your tone. For those in the know, this is part of the magic that makes a great pedal.

When you plug a guitar directly into an amp, you achieve maximum control and dynamics. This means that when you turn down the volume on your guitar, the front end of the amp cleans up. It also means that when you play legato (softly), the amp will also play softer with less saturation. This is the connection that allows your playing style to shine through. Most distortion pedals completely obliterate this connection. Tonebone pedals employ a unique class-A front end that buffers the signal while retaining the natural relationship between your fingers and the amp. You get the distortion, yet you retain the connection.

Another key attribute is the way that tone controls work within each pedal. We do not simply add tone shaping in a cookie-cutter fashion, but optimize the tone by positioning the controls where they will be the most complimentary to the distortion that is being produced. You will also find that unlike other pedals that have very limited tonal range, Tonebone pedals offer a lot of scope. This lets you use the distortion to compliment the tone of your amp so that both play in concert with each other.

Rarely discussed, yet a super important design element of a distortion pedal, is noise. Turn on most distortion pedals and you are immediately accosted with tremendous levels of hiss and noise. With high gain amps the noise is amplified so much that often times the guitarist will seek to find a way to eliminate the noise by using a gate so that when he stops playing, the noise goes away in between songs. The problem with a gate is that when you play softly (legato), you invariably lose the dynamics and the gate cuts off the sustain when soloing. In other words, a gate is merely a bandage for a poorly designed pedal. The Tonebone engineering team is obsessed with eliminating noise. This means that when you turn down your guitar and use your fingers to produce the dynamics, your Tonebone pedal will not drown out your playing with hiss!

Tonebone pedals are made in Canada. We began our journey into building pedals over 40 years ago and over time, we have gained much knowledge both with respect to tone, but also with respect to durability. If you build a product using higher quality components, the result is longevity. We use heavy 14 gauge steel that will stand up to hundreds of thousands of stomps without metal fatigue. This protects the sensitive inner circuit board from stress which can lead to premature cold solder joints and part failure. Although it costs more to build products this way, we save at the back end with much lower warranty repair costs.

When designing Tonebones, we take special care in positioning the footswitches in such a manner that they will not interfere with the controls, yet be compact enough to fit nicely on a pedalboard. The pedals listed below are all powered by 9V which makes them easy to incorporate using a standard pedalboard power brick. Some of these pedals incorporate an effects loop so that when the boost is activated, a second series of pedals will be automatically inserted into the pedal chain at the same time. Think of adding a boost, delay and chorus to your solo with a single foot stomp. These are some of the design attributes that distinguish Tonebone from the rest of the pack.

In addition to the pedals listed below are the Trimode™ and Plexitube™. Please visit the Tonebone website to discover more about the various pedals and the one that may be best suited to your playing style.

The Elevator is not a distortion pedal. The reason it is here is that it is a unique power booster and buffer that can generate mild distortion when pushing the front end of an amp harder. In a way, it is the simplest form of overdrive. With so many players using small amps and pushing them for natural tube distortion, the Elevator can be a great for this type of player.

The Regency is a dual-mode overdrive that targets users who have pre-saturated amps. In other words, it is intended for players who already set their amps with a degree of distortion using the preamp drive and master volume. The Regency is on the cleaner side of the overdrive spectrum and lets you either add clean boost or extra distortion to your signal path. The beauty with the Regency is that it has been designed to add more color and sustain without thinning out guitar tone.

The North-Star™ is an overdrive pedal that targets the player who is looking to embellish the sound of a small amp that is being pushed hard. As a dual-mode pedal, it can drive the amp using a powerful clean boost or add saturation for solos with extra distortion. What distinguishes the North-Star pedal from many others is the ability to retain the distinctiveness of each note.

The Texas Pro™ is an overdrive pedal with a twist. Instead of being a ‘one trick pony’, the Texas Pro offers up three generations of overdrive to suit those who are looking for traditional Ibanez® TS9 type tones, the extra crunch akin to the Fulltone® OCD or the type of custom modified TS9 tone that has become popular in recent years. The Texas Pro is likely the most powerful overdrive made today.

The Classic V9™ is a distortion pedal with several gain stages. But unlike many distortion pedals that are limited in their range, the Classic V9 features a switch that lets you select the range between light, moderate and intense distortion. But what truly sets the Classic V9 apart is its ability to capture the dynamics of the player. When you play legato it cleans up like a real tube amp.

The Hot British is often described as the best Marshall® amp in a stomp box ever made. Although there have been generations of Marshall amps, the tone of the Hot British stems from the latter years when older Marshalls were modified to enable them to produce distortion without having to be played on 10. The contour control lets you voice the Hot British V9 like no other.

For more up-to-date information about these upcoming products, please subscribe to the Radial Blog at the top-right of this page!

Thanks for the fan 📷 = @tales_from_point_nemo J

The HDI has been nominated for a 2021 SOS Guitar &

The Switchbone V2™ gives you the ultimate contro

The BigShot ABY™ is a compact true-bypass ABY sw

The Twin-City™ is an active amp selector that le

Phazer The Phazer is an analog phase alignment to