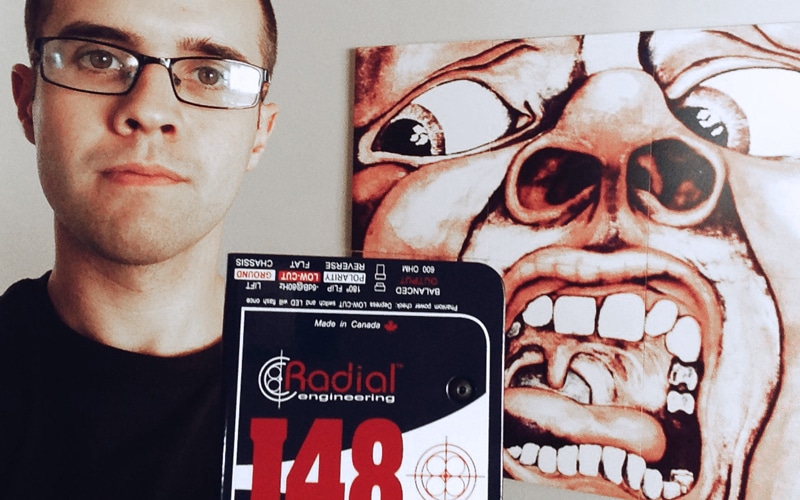 Dan Briggs and his bass offer a whole lot of bandwidth. Despite having played the same bass (a Spector NS2000-5) since he was sixteen years old, that’s about where the predictability of this artist ends. With three active bands on the go you are just as likely to hear a prog metal riff from Briggs as you would something post-hardcore or even jazz fusion.
Since 2005 Briggs has been a member of the progressive metal band Between the Buried and Me (BTBAM) but you might just as well know him from one of his other two projects – the post-hardcore  band ORBS or experimental jazz fusion band Trioscapes. Impressively, each of Briggs’ bands has its own dedicated fan base. Incredibly, Briggs claims he is currently working on another new project.
“I’m usually honestly writing music when I have free time at home. I always have something in the works. We’re just finishing 2 years of touring on the last BTBAM record, and since the beginning of 2014 I recorded a new record with Trioscapes, went on two BTBAM tours and a Trioscapes tour.”

Briggs credits ORBS with helping his writing process: “ORBS gives me a chance to really work on my song writing chops. Our keyboardist Ashley helped me a lot when we wrote our first album back in 2007 with trying to better find what the focus of the song is, instead of just piecing a bunch of parts together. I use that tactic now with everything that I do. It’s harder to do in BTBAM sometimes because 4 different people are writing music and sometimes you have to tell someone their riff just doesn’t fit.”

What does fit, every time, is Briggs’ J48 phantom powered active direct box:  “I use the J48 with my Spector NS2000-5 with active EMG pick ups and blend it with my Sunn 300t head out front. When the band travels overseas I simply just run my bass through the J48 and a line from that straight to my in-ears and it’s just as beefy as it sounds coming out of my 8×10 back home; clear pronounced lows and full bodied highs. I love the way it sounds! In the studio I use it to run certain effects direct as well, bypassing the amp/cabinet.”

“Also there are certain high frequencies [when I use] a bass synth envelope filter [pedal] for example that don’t always cut through on my cab, but the effect really comes alive when I hear it through the J48. The signal is never weak and always adds a lot, whether I’m using it by itself or mixed in with my amp/cab.”