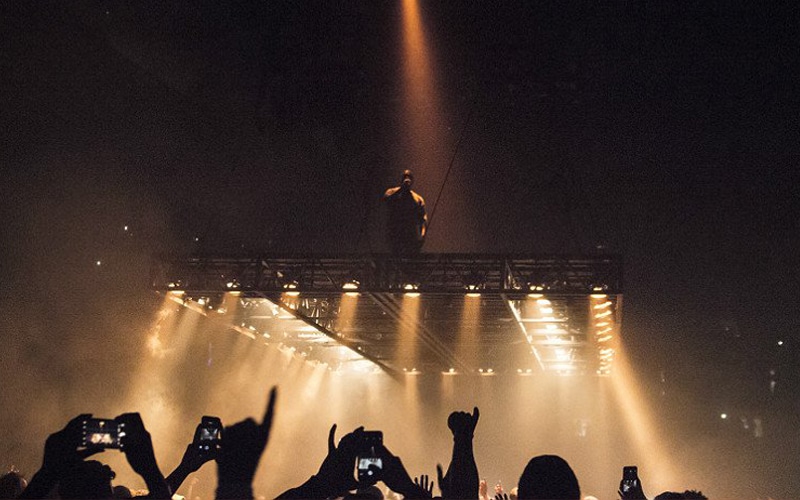 Jim Rhodes, (Artist Relations at Radial). recently caught up with Mike Dean, guitarist, writer, and producer for Kanye West at the tour stop in Vancouver. Here’s the latest of Jim’s ‘Tales From the Rhodes’.

When the Kanye tour came to town I headed over to the venue to check in with Mike who not only produces Kanye, but takes on guitar and keyboard playing duties. He is understandably one of the busier performers you will find because he’s producing and collaborating with many other artists.

Mike enjoys a fabulous career, is a great talent and Radial supporter. Following early career collaborations with artists, including Selena where Mike was musical director and producer, he became recognized for the Dirty South sound in the 90s. Mike’s work expanded with Geto Boys, Tha Dogg Pound, C-Bo, Nate Dogg, Tech N9ne, UGK, Z-Ro, Outlawz and 2Pac. He went on to mix, produce and master widely throughout American hip hop and is a Grammy, and multi award winning producer and engineer. In recent years Mike has become known for his work with Kanye West. He has produced a long list of releases including West’s albums The College Dropout, Late Registration, Graduation, My Beautiful Dark Twisted Fantasy, Yeezus, and The Life of Pablo albums.

In recent years, Mike has served as a regular guitarist and keyboardist for Kanye West’s live performances. He has been involved with many other artists over the years and while touring with Kanye, Mike conveniently engineers and produces onboard the “studio-bus”, that travels from city to city on tour with Kanye.

Mike uses Radial gear that includes three Radial ProD8s. The ProD8 is a rack mountable, single rack space 8-channel passive direct box usually used for keyboard rigs in professional touring. The ProD8 begins with fully redundant dual ¼” inputs on all channels all summed together to enable the user to patch in a backup keyboard and have it on standby should a device go down. This provides up to 16 keyboards or 8 stereo sets to be connected should the need arise. ¼” TRS effects insert jacks on each channel allow two keyboards to share the same effect while adding greater routing options while ¼” thru-put delivers a direct feed to the artist’s playback system.