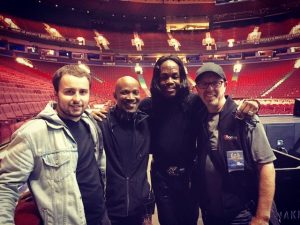 Earth, Wind & Fire is an American band that has spanned the musical genres of R&B, soul, funk, jazz, disco, pop, rock and Latin for over 45 years. The band originated in Chicago in 1971 and now have over 21 albums under their belt and 7 top ten singles worldwide.

Joining them on their current Heart and Soul tour is Grammy winning band Chicago—also from Chicago! Every night, the groups begin by separately playing sets chock-full of hits, then close the show by performing together with more than 20 band members on stage.

Jim Rhodes, Radial Engineering artist relations guy, caught up with Earth, Wind & Fire members Verdine White (bass) and Morris O’Connor (guitar) along with crew member Joe Wolfe (programmer/keyboard tech) and others at a recent show in Vancouver, BC. After “talking gear” with the band, it was immediately clear that they rely heavily on numerous Radial devices such as the SW8™, JDI™ and JD6™.

Joe Wolfe runs two SW8s in his Playback Control rig masterly built by Tour Supply Inc. His favorite feature of the SW8 is the mute switch that lets him audition and cue tracks on the fly. Joe utilized the JDIs and JD6 for the plethora of keyboards that are found on stage.

Watch the video below to get a little taste of Jim’s visit with the legendary Earth, Wind & Fire!