Radial’s SW8, a matter of trust according to David Rosenthal on Billy Joel tour 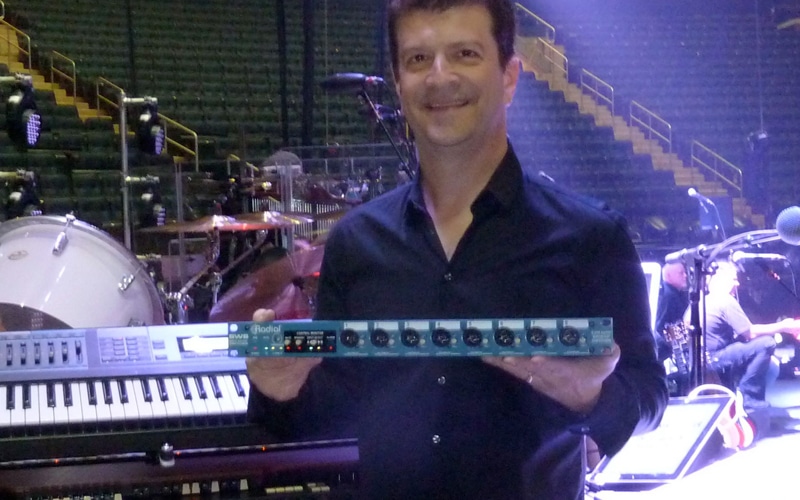 David Rosenthal has a pretty plum freelance gig. For 21 years Rosenthal has performed with Billy Joel as keyboardist, adding musical director to his title along the way. Long gone are the days of challenging countless other keyboardists for a job. Rosenthal credits his highly successful career path to his always looking for an ‘edge’.

In 1981 Rosenthal auditioned for Ritchie Blackmore’s band Rainbow (an offshoot of Deep Purple). For the audition Rosenthal had packed along all of his keyboards. “At that time all I had was a Farfisa organ, a Rhodes and a little Roland synth.” When Rosenthal got the call back he learned that he would be playing on Blackmore’s keyboards and he immediately searched for his edge.

Blackmore’s gear included a Hammond B3 and Minimoog, gear Rosenthal had never played yet and in fact, had only read about: “When I found out I got the call back I went to the nearest Sam Ash, found a Minimoog on display and I sat there with headphones for a few hours. When I returned for the callback audition I was getting around the instrument pretty well, able to set up sounds pretty easily. You do whatever you can.”

By the time Joel was seeking a keyboardist in 1993, Rosenthal was cherry picked to audition.  “By this point in my career, when somebody big was looking for a keyboard player my name would pop up in those circles to audition. It was quite different from my audition for Rainbow where I had to do a cattle call of 50 players.”  In fact, this time Rosenthal was one of only two players asked to audition.

Joel’s latest string of shows follow a 3 year hiatus that left Rosenthal plenty of time to work on several projects, appealing to his inclination towards participating in a variety of roles. Rosenthal says he enjoys being behind the scenes once in a while. During this last break he took on some session work, did synth programming for Bruce Springsteen’s ‘Wrecking Ball’ tour and also worked with child pianist/composer phenom Ethan Bortnick’s shows on PBS. (At 9 years old, Ethan became the youngest artist to have his own National PBS Concert.) Rosenthal’s work as musical director for Bortnick’s PBS Special ‘The Power of Music’ included putting together an orchestra, a choir and band. According to Rosenthal, Bortnick “entertains like he is 45 years old but he is 13.”

Echoing Joel’s hit ‘A Matter of Trust’, Rosenthal delivers a bullet-proof rig for Joel’s tour. A long time Radial user, the Radial SW8 figures prominently in his equipment plan: “I’ve been using SW8s for quite some time, but most recently in the new generation of my keyboard rig that I’m using on this tour.  Everything is Mainstage based, I’m streaming my sounds and it all lives on solid state drives. It’s really great but if something does go wrong, it takes time to restart the computer and reload everything and I can’t take that chance during a live show. I am actually running two Mainstage systems simultaneously in real time and I have my SW8 controlling all of the outputs so if one happens to glitch I can switch to the other one instantly from the stage using the JR2 remote and I can keep playing away while the first computer gets restarted. It doesn’t happen very often, the system is very stable, but it’s a good safety net to be able to hit one button and keep playing.”

“I also designed and programmed up the rig Billy plays on stage. He’s not actually playing a real piano, it’s a grand piano shell but there are actually no strings in it, it’s hollow. We fit a controller keyboard (the Kawai VPC1) into it which doesn’t make any sound, it’s just a controller that plays Ivory which is running on two Receptor Trios and the SW8 switches between them.   It sounds great and we never have to worry about tuning the piano. SW8s play a very significant role in the show. I’m a Radial fan; it’s filled an important need for what I’m doing here. I’m very happy with it.”