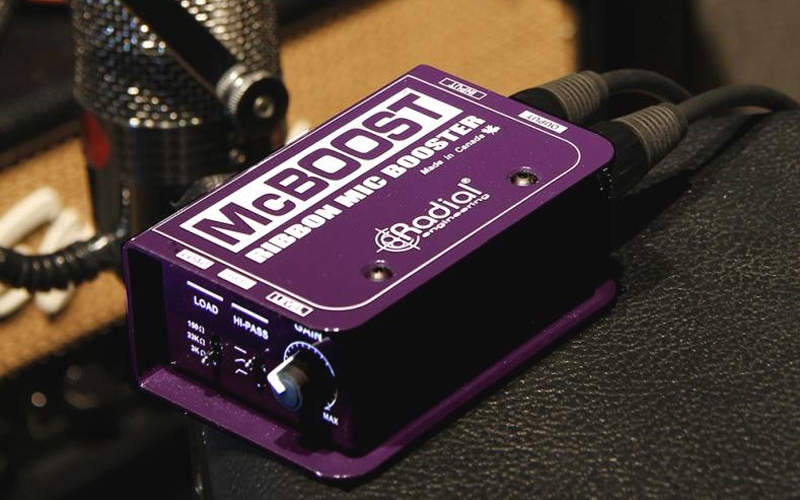 The following is a review by Paul Vnuk Jr. originally posted in the May 2017 edition of Recording Magazine.

The new McBoost™ is an energy drink from the well known fast-food chain… just kidding. It’s actually a new product in the ever-expanding roster of studio and live sound solutions from Canadian audio firm Radial Engineering. The McBoost is a very aptly named Mic Booster… a gain boost for dynamic and passive ribbon mics in a rugged inline format. This type of device helps get the most out of your non-phantom-powered mics, which are typically on the quiet side when used on any source that is not a screaming guitar cabinet or a part of a drum kit.

When using said mics on a soft vocal or spoken word passage, acoustic guitar, or an orchestral string instrument, typically the solution is to crank the gain on your preamp. However, since many common preamps top out at too little gain to get the job done, you can end up running them at their outer limits, adding a healthy dose of unwanted noise with your gain. The McBoost effectively adds up to 26 dB of ultra-clean gain before the mic signal even reaches the preamp; in essence, it turns passive mics into active mics with a strong clean signal.

The McBoost is housed in one of Radial’s compact direct box enclosures and is finished in the company’s well-known, durable baked-enamel coating with nonskid rubber padding on the bottom. On one side of the McBoost are the XLR in and out, and while many mic boosters stop there and just boost the signal as is, flipping the McBoost to its other side reveals that it has a few more tricks up its sleeve. 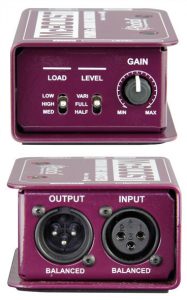 There’s a 3-position Level switch with settings for Vari, Full, and Half. This lets you use the Gain pot to set the amount of boost, or just get a full 26 dB of gain or half that amount, depending on the needs of the source, mic, and preamp.

The other 3-position switch is labeled Load, and has High, Medium, and Low settings. One of the traits of passive mics is that they are subject to, and sonically affected by, the impedance load from different preamps. Using a box such as this negates these varied impedance effects, which can be a great benefit for sonic consistency, or a weakness due to fewer tonal options, depending on your point of view. To give you back some say in the matter, the McBoost lets you choose three different impedance loads.

Choosing each one will alter the sound and performance of your mic, and since no two mics are alike, I can’t tell you empirically what each setting sounds like across the board. Having said that, I can give a fairly common example: on my Shure SM7B—a broadcast dynamic mic famous for its “voice of God” tone but notoriously weak output—I found Low was the most dark and muffled, Medium was a bit more mid-forward, and High (my favorite) had the most openness and depth.

Beyond that, the McBoost does exactly what it says on its box and does it impeccably on every passive mic I threw its way. If you are in the market for a mic booster and you’re a fan of Radial Engineering’s clean sonics and rock-solid build quality, make sure you check the McBoost out!