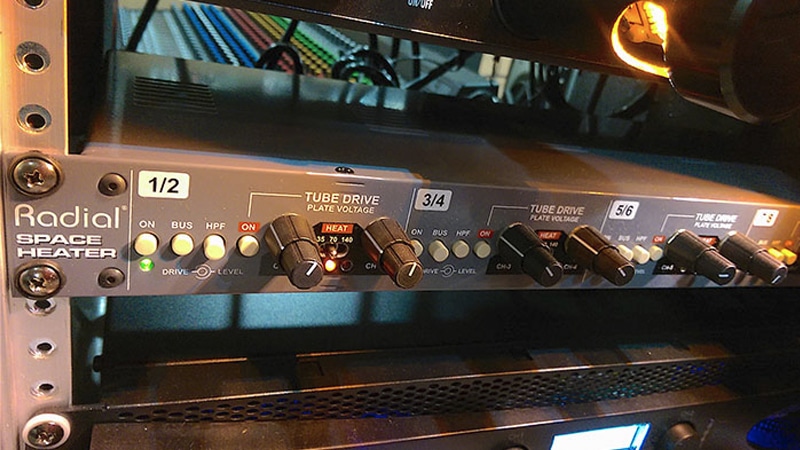 The following is a Pro Audio Review by Strother Bullins of Pro Sound News.

Radial’s unique Space Heater™ ($1,699 street) is an eight-channel stereo summing mixer featuring a 12AX7 tube per input pair for flexible saturation, transformer-coupled outputs and a whole lot of useful flexibility, making it a cool tool for both studio and live sound applications. It can be used to create a range of pleasurable tones from DAW stems, for example, or essentially any input source that may benefit from tasteful to even-ripping distortions, as well as access to external processing via its eight inserts offered on individual quarter-inch TRS balanced sends and returns.

Eight channels of DB25 inputs—wired in parallel to the Space Heater’s eight quarter-inch TRS balanced inputs—and eight DB25 outputs provide multichannel I/O, while stereo sum outputs via XLR are offered, too. With the unit’s quarter-inch TRS link I/Os, additional Space Heaters can be linked together, allowing for 16×2, 24×2, or 32×2 configurations. This is a fully pro-grade unit; from the 5-pin locking XLR connection to its external power supply to its 14-gauge steel chassis, the Space Heater is ready for years of service.

Utilizing the unit first as a hardware insert device for Logic Pro X-based tracks, I discovered how useful it could be to allow for analog processing and flavor on some rather “cold” sounding drum performances. Varying between subdued analog flavor to downright gritty vibe, spreading the Space Heater’s deep, even-order harmonic distortion generously over my tracks meant that my vanilla drum stems became whatever I wanted them to be after tracking—and all that outside of the box with tons of available headroom. Also the insert points allowed me to pop in more discrete channel compression, allowing for additional flavor and effect during the summing process.

Following the impressive use while processing prerecorded tracks, I racked up the Space Heater for some live sound applications. Using my trusty and ubiquitous Mackie® analog mixer featuring Onyx™ preamps, I sent key channels to the Space Heater—vocals, bass guitar, kick and snare—adding in appropriate bite, natural tube circuit compression effects, and impact to these sound sources, respectively. That said, it’s intuitive and a whole lot of fun to use, adding some warmth or gritty sophistication to even plain (i.e. really clean) modern signal flows.

Applications for the Space Heater abound; Radial suggests using it for a range of things, from the last stage of a vocal recording chain to desterilizing in-ear monitor mixes, all of which are personally tantalizing after having heard its capabilities in both studio and live settings.

Notably, the unit is always crystal clean when you need clarity, or as dirty as you want it when you need grit. As a tube-packed unit, it is weighty for its size (8.5 lbs.) and understandably runs warm to the touch. Most importantly, having used Radial Engineering DIs and other associated gear for a long time now, I can assure you that the Space Heater is built to last, serviceable if needed, and will retain its appeal and value in the future.

For more on the Space Heater.

For more from Pro Sound Network.