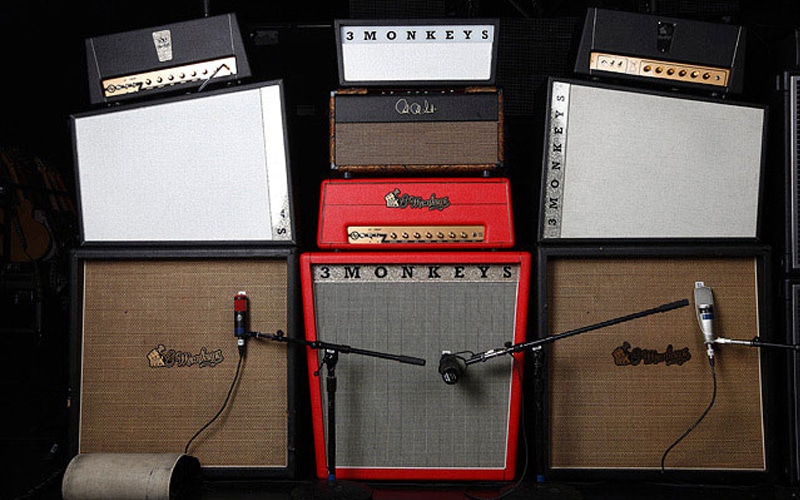 ABY switchers are primarily used to feed two guitar amps from a guitar.  The AB designates the ability to switch between amplifiers while the Y means that both amps can be turned on at once.  Using an ABY switcher is easy. You connect your guitar or the output from your pedal-chain to the ABY, and from the ABY, you feed the two amps. Unfortunately, the results often include tremendous noise, weird tones and even an electrical shock!

ABY pedals generally come in two categories: passive and active. Passive ABYs do not require any power to make them work while active ABYs must be powered like most other guitar pedals.

Passive ABYs are simple switches that divert the guitar signal to one amp or the other.  There is no ‘buffer’ or electronic amp inside the ABY to manage the signal. Some tone purists prefer passive switchers as they do not color the guitar signal in any way. When running two amps at once, the signal going to each amp is reduced by half, like a simple Y-jack cable.  The BigShot ABY is a passive ABY switcher.

Active switchers employ a buffer or unity-gain amplifier to lower the impedance to reduce susceptibility to noise and manage the electrical signal. A buffer not only drives the signal further without noise, but the capacitors in the signal path also block noise that may be coming from the amp from bleeding back into the guitar. The Twin-City and Switchbone are active ABY switchers.

Pedals that completely remove the effect circuit from the signal path are known as true-bypass pedals.  The concept here is that a true-bypass pedal will relay the original sound of the guitar without any buffer or loading on the pickup which could alter the clean tone. The downside with true-bypass pedals is that they tend to produce switching noise due to the hard-contact that is created when the footswitch is depressed and the internal relay is called into action. The noise is most noticeable when using high-gain amps. The BigShot ABY is a true-bypass ABY switcher.

The benefit to using active switching with a  buffered circuit is that it allows the electronic engineer to manage the signal to eliminate noise. The Twin-City employs electronic switching while the Switchbone employs a series of photo-electric chips (opto-couplers) that ramp-up and then ramp-down the signal in a controlled fashion in order to eliminate the hard contact. This type of switching requires the signal to be buffered.

There are two general camps when it comes to buffers. The most common is the use of an integrated circuit (IC) while the second is more of an old-school discrete class-A approach. For maximum efficiency, ICs pack thousands of transistors inside a very small package to produce tremendous gain. To control the gain, various degrees of negative feedback is applied. Most guitarists hate the sound of these buffers as they make a nice warm sounding guitar sound harsh. This is the primary reason guitarists complain about the sound of wireless systems. Both the Twin-City and the Switchbone employ 100% discrete, class-A circuitry.  When this means is that instead trying to control the gain of a chip by applying tremendous amounts of phase-cancelling negative feedback, individual transistors are used at each gain stage. This means only the absolute minimal amount of negative feedback is applied. And because we are using class-A circuitry, you get a much purer signal path.

Early on, we discovered that even with the very best circuit, buffering a guitar signal can make it sound ‘too clean’. To solve the problem, Radial invented Drag Control – a simple load correction circuit that compensates for the overly clean signal path and replicates the tone as if connected directly to the amp. This encompasses compensating for the natural roll off of the cable and of course the load that is typically applied from a tube amp – whereby it sounds totally different from a transistor amp.

The hum and buzz caused by a so-called  ground loop is produced when two amps are connected together and share both an electrical ground and an audio ground.  The noise problem can be mild to acute depending on the amps, the electrical circuit and other factors such as spurious noise from the electrical system. The first line of defence is to connect both amps and all of the pedals to a single power strip. This ensures the same electrical phase is powering both amps. Unfortunately, more often than not, this solution rarely solves the  problem that is inherent with varying voltage references and grounding schemes on the amps. To solve the problem, transformers are inserted into the audio path.

A typical transformer is a device that is made up of two coils and an inner core. The primary or input coil becomes magnetically charged when current is applied. The magnetic field is then transmitted through the core where it excites the secondary coil which in turn produces an electrical current.  This creates a magnetic bridge that passes audio, while blocking stray DC currents and noise. Since the bridge is magnetic, there is no direct electrical connection. This disconnects the audio ground and breaks the ground loop, thus eliminating the hum and buzz. The Twin-City and Switchbone have transformers on output-B for this reason. The BigShot ABY also has a transformer that may be inserted into the signal path. As transformers are passive, you can loose some of the signal going through it unless the signal is first buffered by a pedal like the Tonebone Elevator.

When playing two amps, it is important that they both play in phase. This means that both speakers are pushing outward instead of one going in, while the other goes out. When both amps are on, if the sound is distant, the amps are likely out of phase.  In order to phase-align the amps, you must be able to reverse the polarity at the output of the ABY switcher. This requires a transformer.  The BigShot ABY, Twin-City and Switchbone are equipped with transformers and 180º degree phase switches to invert the polarity.

As mentioned above, true-bypass switches are basically hard electrical switches produced by a footswitch or an electronic relay. These do not color
or load the pickup but do so at the expense of a loud pop. This is most noticeable when using high-gain or distorted amps. The BigShot ABY uses a true-bypass footswitch. Electronic switching as used in the Twin-City employs an electronic circuit to do the switching. This buffered circuit allows the engineer to control the switching to eliminate the loud pop. In this case, the buffered signal is always in the signal path. The Switchbone goes one step further by employing opto-couplers that ramp up and down the signal for a super smooth and quiet transition. Opto-couplers employ an internal light and receptor to do the work. These are expensive and rarely used.

To avoid an electric shock, never disconnect the U-ground on your guitar amps. This is sometimes done to eliminate noise. The ground is there for safety and will save your life if ever you find yourself on a wet stage or somehow get entangled into a situation where the power system from the lights or PA is at odds with your guitar amp setup. Radial makes ABY switchers that solve the noise problem without placing you in harm’s way!