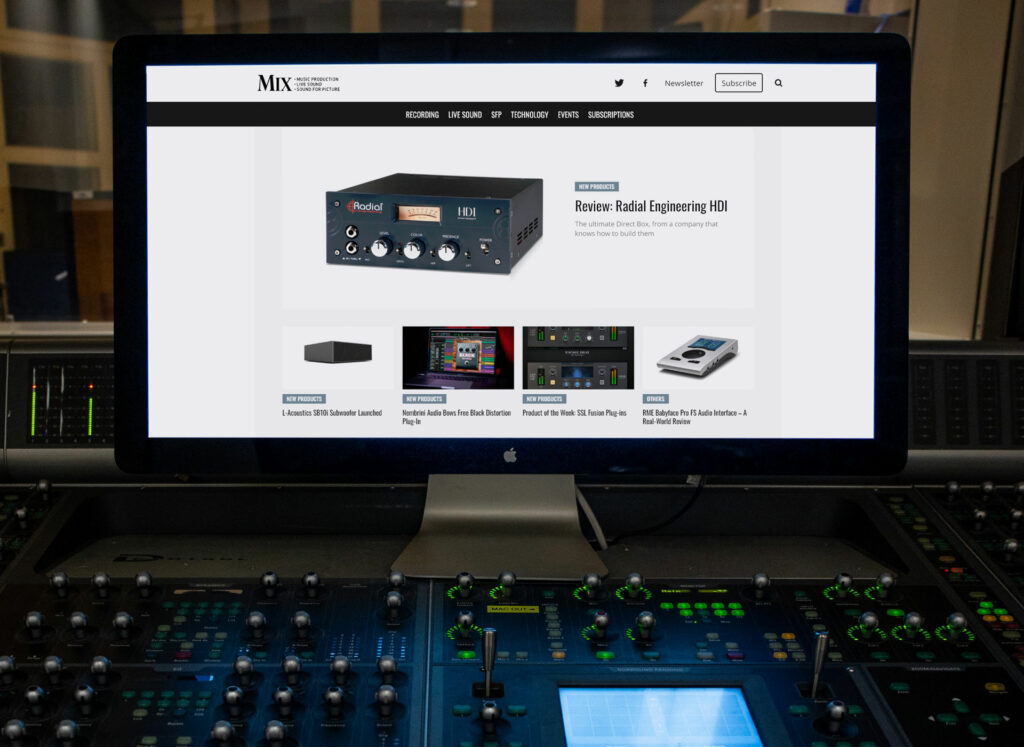 The ultimate Direct Box, from a company that knows how to build them

Radial Engineering has a reputation for making products that are built ruggedly and well-designed. Among their best known and revered devices are their numerous and varied direct boxes. They have active, passive, digital and tube models, and offer a variety of form factors and price points.

But with the HDI, which Radial describes as a “high-definition studio direct box,” the company has put out a unit that exceeds all their others in terms of features, quality and price. The company is hoping the HDI will be attractive not only for studios, but also as a key part of high-end onstage bass or acoustic instrument rigs.

When they were planning the design of the HDI, Radial didn’t mess around. They handed the project to Senior Design Engineer W.C. “Hutch” Hutchinson, who had formerly worked for Neve and Manley. The design he came up with not only handles the conventional duties of a direct box with aplomb but also functions as an instrument preamp. In addition, it gives you creative control over the signal, allowing you to dial in distortion, presence and optical compression. 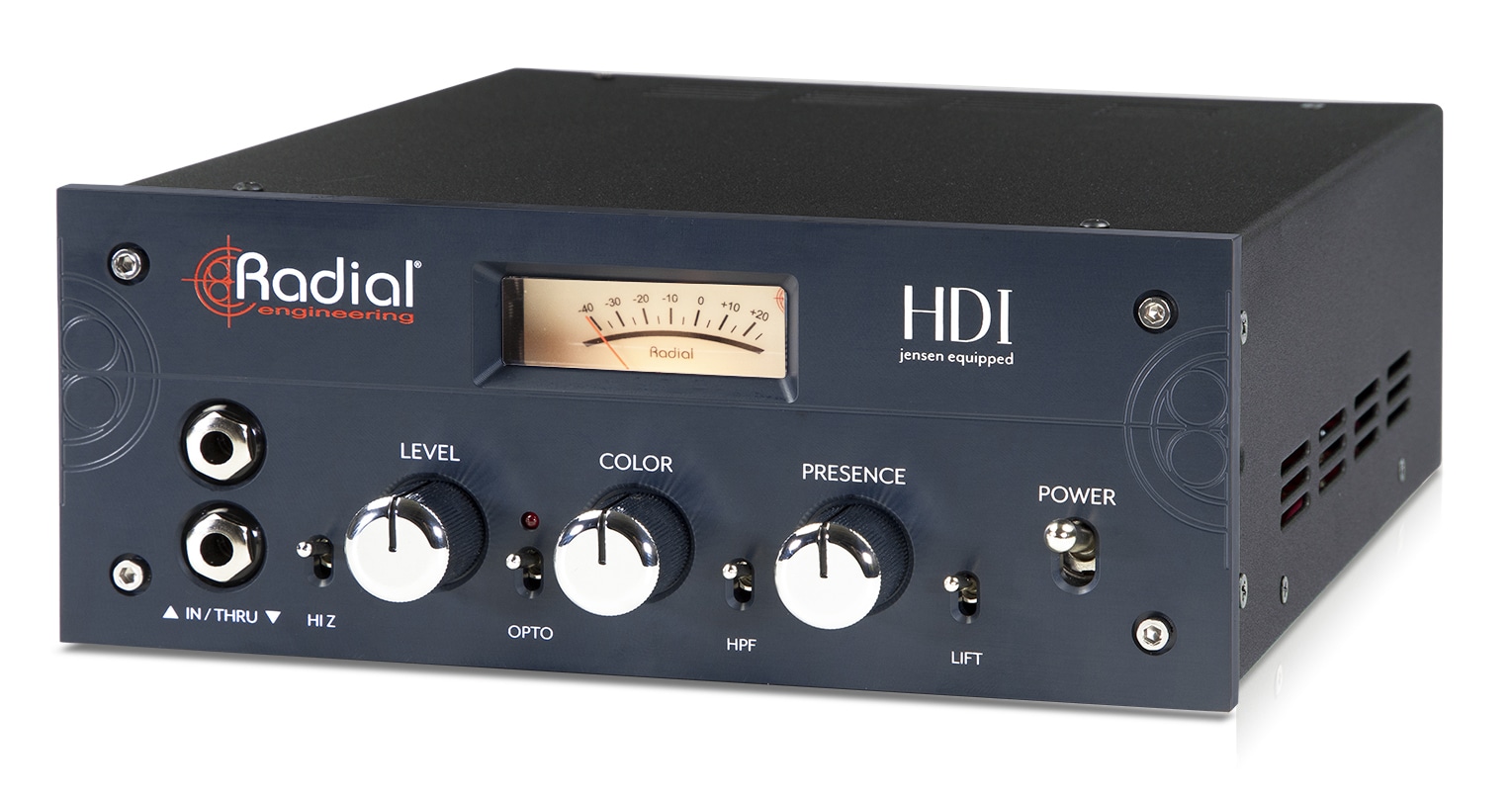 The HDI is a standalone, 2RU half-rack sized unit in a metal chassis. It comes with mounting ears for installing it singly in a rack or side-by-side with a second HDI.

The unit is loaded from an I/O standpoint. On the front, it sports ¼-inch TS In and Thru jacks. An adjacent Hi-Z switch offers a choice of high or higher impedance (200 KOhms or 2 MegOhms), each of which can offer subtle tonal differences depending on the type of pickup of the connected instrument.

On the rear are two XLR outputs: One is standard mic-level and the other goes through a preamp and is line-level. Having the line output gives you the option of avoiding the mic pre of a mixer or interface by going through its line in. The Line Output also has a Pad switch that reduces its level by 15 dB to avoid overloading audio interfaces with lower input tolerances. Both the Mic and Line outputs feature their own Jensen transformers.

The Processed Output is a quarter-inch jack that sits next to the Mic Output. It allows you to send a processed signal to an amp or other high-impedance device.

Two other inputs reside on the back panel, including a second quarter-inch jack that mirrors the one on the front, which takes priority if both are connected. The final input is a 1/8-inch mini jack that’s compatible with modular synths.

The HDI is the only Radial DI with a built-in power supply. You connect it to power with an IEC cable, not an external adapter.

The front of the unit offers three knobs and a series of switches that allow you to control the HDI’s various functions and circuits. A VU-style meter displays the Output level.

Although the unit is quite complex under the hood—it features four parallel circuits—the user interface is relatively simple. You control most of its functionality with the three knobs, Level, Color and Presence, all of which interact with each other to some degree. You don’t need to be a tech nerd to set the HDI; a little experimentation can get you a wide range of sounds.

The Color knob is the key control for altering the sound of the unit. When it’s turned down, the HDI is a clean and extremely quiet, active DI. As you turn it up, it starts to bring in the rich harmonic distortion generated mostly from a custom Jensen transformer and tube-emulation circuitry.

The amount of distortion is not only controlled by the position of the Color knob, but by how high you’ve set the Input level. The latter functions essentially as a drive control when you have the Color turned on. With both Input and Color cranked, you get a substantial amount of saturation. On an electric bass or guitar, it sounds a lot like playing through a distorted amp.

The Presence control gives you more upper-mid and high-end emphasis. It functions almost like a wet/dry control for the distortion, cleaning up the sound to some degree as it’s turned up.

A three-way toggle switch governs the opto compressor. The bottom position is off; the middle position gives you an 8:1 ratio, and the top about 12:1. The level of the Input knob also drives the amount of compression. A red LED lights when you trigger the compressor.

If you have the Color control set above 12 o’clock, the compression shuts off automatically. Radial figures you’ll get natural compression from the distortion that you get with the knob above half. Particularly for bass, the compression can be quite useful to knock down higher transients and even out the performance.

The three-position HPF switch lets you turn on a highpass filter, which only affects the signal that goes through the distortion circuit. It allows you to roll off unwanted low-end content that can be caused by the distortion circuitry. The three-way switch lets you choose between off, and cutoff frequencies of 80Hz or 120Hz, with a gentle roll-off.

You also get a ground lift, which is standard and necessary on a DI box, and a large Power switch. 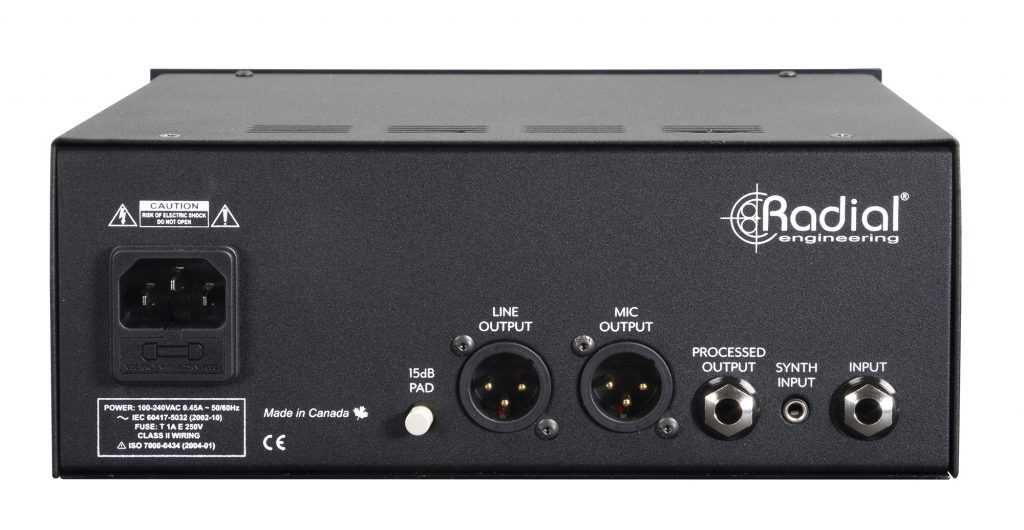 The HDI’s back panel features both mic and line-level XLR outputs.

I tested the HDI in the studio on several different instruments. All sounded excellent through it, but electric bass was probably the most impressive. Whether going through the mic-level output into a preamp or line-level into a line input, my Fender P-Bass sounded richer and fuller than it did going straight into the instrument inputs on any of the audio interfaces I tested it on.

For a full-bodied, clean sound, I set the HDI with the Color turned off, and a bit of Presence dialed in and the compressor on to tame my inconsistent dynamics. With different combinations of the three knobs, I was also able to get a variety of usable sounds, both clean and distorted.

I wish I could have tried the HDI on an upright bass with a pickup. I would imagine that if you recorded the HDI and the output of a mic and blended the two, you could get an excellent sound. The Presence control could be useful to bring out the right hand, in particular, which can sometimes get lost when miking.

Another use on upright would be if you were recording an ensemble live and trying to avoid bleed. If the pickup were of good quality, you could probably get by with the DI part alone, thanks to the stellar sonics of this unit.

I also recorded many DI electric guitar parts (using a Strat or a Tele), to which I later applied amp modeling plug-ins. The HDI sounded excellent, particularly on clean tracks where boosting the presence added some subtle shine. The HDI’s impact on the sound wasn’t that noticeable for tracks where I added distortion or overdrive from an amp-modeler.

Although I liked the compressor a lot for bass, I found it to be a little heavy-handed for electric guitar. The attack and release settings (which you can’t adjust) are not ideal for guitar—particularly for single-note parts, which had their transients overly squashed.

I also used the HDI to record pedal steel, which is an instrument that’s often taken direct or direct in combination with a miked amp. Here, once again, the unit shined.

Most pedal steel parts require a clean and clear sound, and the HDI, with its high-quality sonics, was a perfect fit. Like with clean electric guitar, the Presence circuit was handy for some subtle brightening. What’s more, a little bit of saturation from the Color circuit sounded good to add subtle grit for certain parts.

Finally, I tested the unit on a Taylor acoustic and a Beard resonator guitar, both with piezo pickups installed. In the studio, I always opt to mike these instruments, but the HDI would be an excellent addition to my rig for live work. Going through it, the pickups sounded the best I’ve ever heard them.

I would imagine that the HDI would also be excellent for the direct recording of synths and other electronic keyboards.

For a commercial recording studio or a high-end personal studio, the HDI would be a worthwhile investment. Its ability to capture rich-sounding electric-bass parts would improve the sonics of every track it is used on. Its versatility for other electric instruments will have you reaching for it regularly.

With its high-quality and lofty price point, one could draw an analogy between the HDI and a sports car. It’s not a necessity, but if you’re looking for ultimate performance and features you can’t find elsewhere, it’s hard to beat. 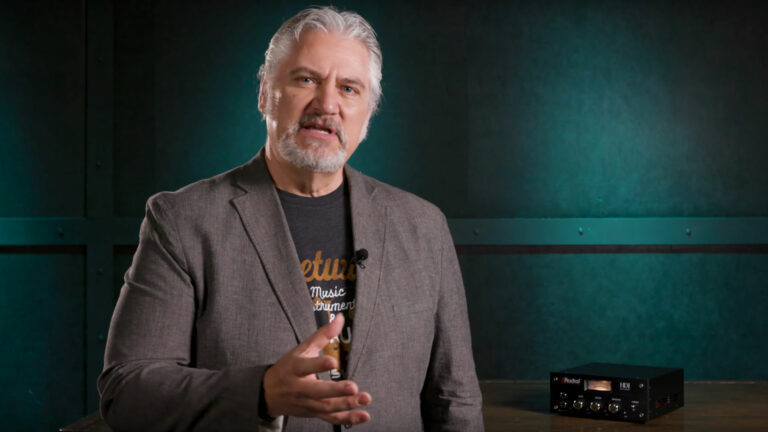 Mitch Gallagher from Sweetwater demos and reviews the HDI by Radial Engineering.