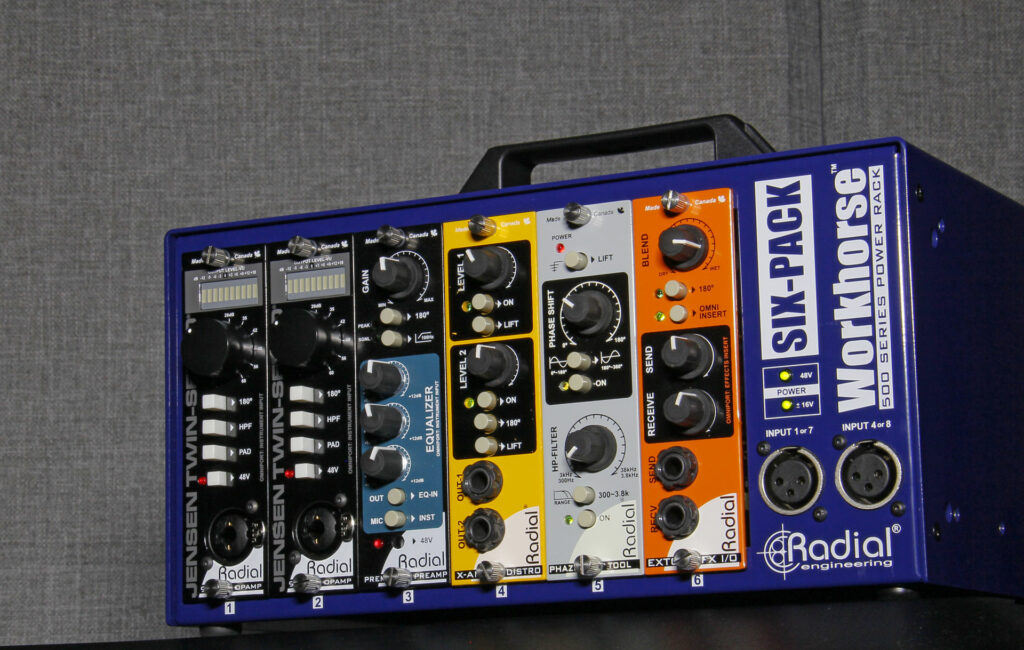 The modular 500 series audio format has been around a long time, but it’s enjoying more popularity now than ever before. For those who aren’t familiar with this type of equipment, one common question is “what are the benefits of getting into the 500 series world and how can I use it for my own recording/performing setup?” As Radial manufactures a number of power racks and modules for this format, we answer this question often and thought it would be useful to break down some of the many reasons it can be advantageous for anyone in the audio industry.

The first benefit you’ll notice about the 500 series format is that it’s much more streamlined and compact compared to other rackmount or standalone audio gear. This is a big selling point for many, as extra space in a gig bag or a home studio can be hard to come by. 500 series modules are only 5.25” high and 1.5” wide, and the power racks that they mount into come in a variety sizes that can hold anywhere from three to ten modules at once. Even the largest power racks in this format only take up three rack spaces in a 19” equipment rack, which not only saves space but ensures all your gear can be within easy reach when you need to adjust settings.

The Powerhouse 500 series power rack can mount up to ten modules in 3RU of rackspace.

When working on the road, at a gig, or out of a different studio, not many engineers or musicians are going to pack up their 19″ equipment racks and take them along, but that’s exactly what you can do with a 500 series power rack. Many come with carrying handles for exactly this purpose, with the Radial Cube and the SixPack being two prime examples. This portability allows you to take your “gold” signal chain with you wherever you go, and ensures continuity of your sound quality across multiple locations. Even for those who don’t plan on traveling with their gear, it’s always nice to have a little more legroom in the studio without sacrificing the amount of outboard gear available. 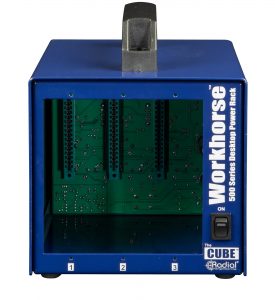 The Cube 3-slot power rack and the SixPack both offer portability as a key benefit.

A wide variety of manufacturers have jumped into the 500 series market since the format’s inception decades ago, and its popularity has only continued to grow since then. You’ll find no shortage of 500 series mic preamps, compressors, EQs, direct boxes, and effects units available, along with unique devices like Reampers and interface modules. This huge range of options to choose from, along with how easy it is to swap out modules and rearrange them on a whim, is what makes the 500 series format so versatile and adaptable to your unique needs as an engineer or musician.

You can have a three-slot portable rack filled with your favorite mic-pre/EQ/compressor signal chain, or ten identical high-gain mic preamps in a larger rack for an orchestral recording date – there are limitless combinations and it’s all easier to rearrange than a pedalboard. The power racks themselves can also be widely varied, not just in their size but among the available features and routing options as well. For example, the Radial Workhorse is a combination 8-slot power rack and summing mixer, making it easy to send a latency-free stereo mix to a cue system while recording eight channels directly into an interface at the same time.

The Workhorse lives up to its name by including an 8×2 summing mixer and dual headphone amplifiers with eight slots for 500 series modules.

One benefit of 500 series gear that is less often discussed is the boost it can provide to your creativity, both in the way you might approach your mixing and recording workflow, and with the ideas that can be sparked when you have a whole new category of products to explore.

There is now a new generation of audio engineers that have been making music while working almost entirely ‘in the box’ and using the power of modern DAWs, plugins, and virtual instruments to great effect. However, much like the ‘old guard’ of analog tape engineers who quickly leveraged the benefits of digital audio and adapted their workflow accordingly, newcomers to the industry can benefit from adding some analog equipment to their studio setups. Tracking live through an EQ and compressor can improve your ability to commit to a sound from the onset of a project, and you will likely find that you learn and remember the finer details and nuances of an analog piece of gear much more so than it’s myriad digital counterparts. On top of that, the tactile response and enjoyment that comes from using an actual physical piece of audio equipment is hard to match, and the resale value years later vs. the license for a plugin pack is even harder.

Getting into 500 series gear can also be like digging into a whole new sandbox of audio toys to play around with. Case in point is the EXTC, a unique module that is designed to interface your line-level pro audio gear with guitar pedals and effects, allowing you to employ your pedal collection during mixdown for seamless use on any track. Throw a flanger on vocals, distortion pedal on drum overheads, fuzz on a french horn – some of the most creative and inspiring choices in the recording studio are born out of experimentation. 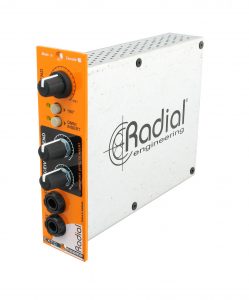 The EXTC is a unique product that allows you to Reamp recorded tracks through guitar pedals, treating your pedal collection like a set of line-level outboard signal processors and adding a creative new element to your mixes.

Scalable For Any Budget

Being able to start small and build up as you go is another advantage to 500 series equipment. With three-slot power racks like the PowerStrip and the Cube available, you can dip your toe in the water without a large initial investment, and upgrade to a larger setup as your requirements change. While it is admittedly tempting to fill all the available slots in your power racks immediately, you can also start with just a few crucial modules and purchase more in the future so your gear expands at the same rate as your budget. Prices for individual modules have a fairly wide range as well, with many affordable options on the market that provide a lot of bang for your buck.

The Powerstrip is the perfect introduction into the 500 series format, housing three modules in just a single rack space.

Have Fun With Your Music Again

While it can be easy to forget sometimes after a long recording session or a taxing gig, almost everyone who works or performs in the audio industry got into it because of how much fun it truly is to work with music. We believe an intangible part of why 500 series gear has continued to increase in popularity, in spite of continued improvements to digital audio platforms and plugins, is the fact that it is simply enjoyable to work with. Whether you are a newcomer to the audio world who is getting their first taste of that kid-like experience of turning knobs and seeing what happens, or someone who has worked on large format recording consoles and knows that using a rack of 500 series modules is reminiscent of that feeling, this aspect of the 500 series format might just outshine all the other benefits combined. Ask anyone who has 500 series gear in their setup whether they have fun when they use it, and we think they will back up this claim without any doubt. 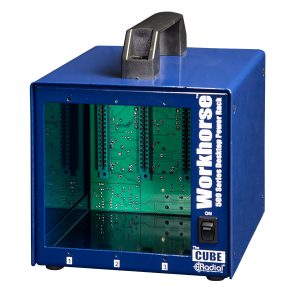 The Cube is a 3-slot power rack for 500 series modules, designed to create a portable channel strip with 500 milliamps of available current. 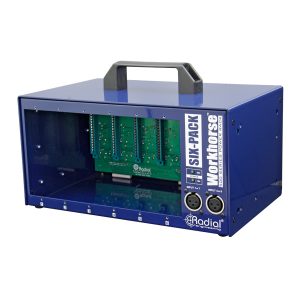 The Radial SixPack is a desk-top 6-slot power rack for the popular 500 series, designed to create the ultimate channel strip with 1600 milliamps of available current. 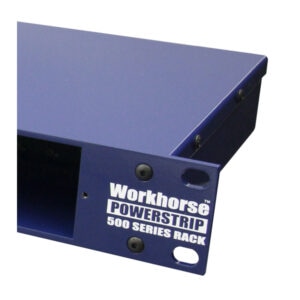 The PowerStrip is a 3-slot power rack for 500 series modules, designed to create a compact channel strip with 500 milliamps of available current. 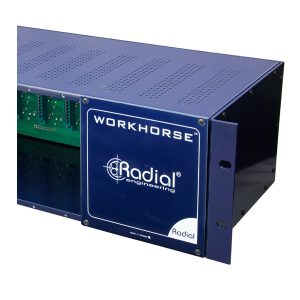 The Radial WR-8 is an 8-slot power rack that lets you load up to eight 500 series modules. Can be expanded with the WM8 mixer for full Workhorse capabilities. 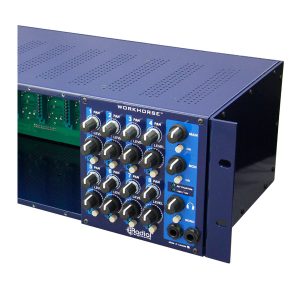 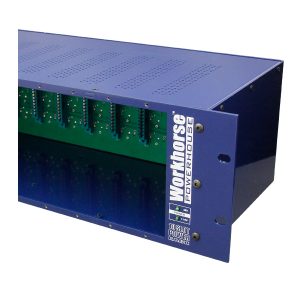 The Radial Powerhouse is a 10-slot power rack for 500 series modules designed to provide maximum density for professional studio setups. 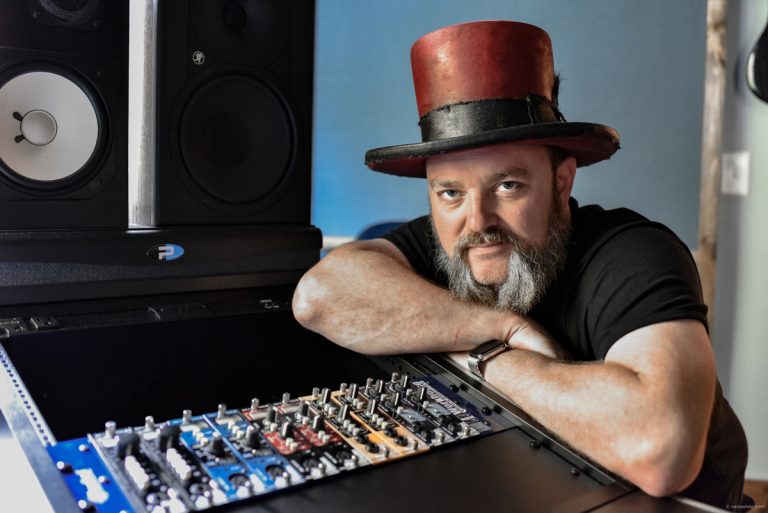