Direct Boxes: The Good, The Bad, And The Ugly

The following was originally published in Live Design.

For many musicians and engineers, a DI is merely a little black box that changes a connector. But a DI box does so much more, and just like microphones, there are many to choose from, depending on your application and the desired outcome.

The primary function of a direct box is to convert the unbalanced high-impedance signal from an instrument to a balanced low-impedance signal that is compatible with a P.A. or recording system. A high-impedance signal such as a ¼” coaxial cable from a guitar or bass is much more prone to picking up noise from magnetic fields and radio frequencies from nearby power supplies, dimmers, lighting systems, guitar amplifiers, and power cables. As a rule, coaxial guitar cables should not exceed 25′. Balanced low-impedance cables—usually terminated with 3-pin XLR cables—can extend thousands of feet, because they employ a twisted-pair design that inhibits noise. (Telephone companies have used twisted-pair cable for more than 100 years for this reason.) Properly matching the high input impedance from an instrument and converting it to a low impedance also helps retain the instrument’s natural tone.

Direct boxes are available in two general categories: active and passive. Similar to a dynamic microphone, a passive direct box does not require power to work. The engine inside is an audio transformer. And just like a dynamic microphone, you can “hit” the direct box with a very high-output source and it will not distort. In fact, transformers do not distort; they saturate. As you increase the input, the transformer acts like a natural limiter or compressor, and, depending on its quality, yields a warm tone that is often referred to as “vintage sounding.” Low-cost transformers are built around steel cores, while expensive ones, such as those made by Jensen Transformers Inc., employ nickel. Nickel tends to be preferred because it renders much more natural tone with less odd-order harmonic distortion. Passive DI boxes tend to be preferable for high-output instruments such as keyboards and active basses.

Most direct boxes include a pad, which is sometimes engaged when the input signal is so hot that it causes the box to prematurely overload. A 180° polarity-reverse feature performs two functions. Mainly, it can be used to interface with older equipment that may not be wired to the AES standard of pin-1 ground, pin-2 positive, and pin-3 negative. This function can also be used for creative purposes when combining a microphone and a DI signal, to make the combined signal fit together more musically. A ground-lift switch reduces noise from ground loops by lifting the audio ground (pin-1), letting the source and destination derive their respective grounds from the power system.

Active DIs are like condenser microphones in that they require 48-volt power or a battery to function. The power is used to amplify the signal and like any amplifiers, the dynamic range is limited by the available power. As batteries tend to go dead at the most inappropriate times, most active DI boxes employ 48-volt phantom for powering the circuit, which in turn will perform impedance and balancing conversion. The trouble here is, if you encounter noise and lift the ground, this function shuts off the 48V phantom power, reverting the power to a battery. Some newer designs (for example, the Radial J48) enable the ground to be lifted without losing power, thus eliminating the need for batteries.

Passive direct boxes tend to be better at eliminating noise, thanks to their built-in transformer. (A transformer is, in fact, a magnetic bridge that blocks DC noise while allowing audio to pass.) Because active DI boxes employ an amplifier, they tend to have more reach, just like a condenser microphone. So for more “delicate” instruments such as an acoustic guitar or mandolin, an active DI tends to be the more popular choice.

For simplicity, the output from a direct box is mic level. Most stages will have anywhere from 30 to 60 mic lines coming off the stage, so making all of the signals the same makes it easy for routing and switching things around. This enables the stage tech to run all audio cables inside the same snake cable without fear that one channel may cause crosstalk with another.

Today, you’ll often see more direct boxes than microphones on professional stages, as DI boxes have several advantages: Because the connection is direct from the instrument or amp, the acoustics in the room do not interfere with the sound. And because the sound coming from a microphone will change dramatically when the mic is moved, soundchecks can be long and painful. A direct box eliminates unknowns and provides greater consistency night after night. Thirdly, microphones are not selective; they’ll pick up adjacent sounds from instruments, amps, and other noise sources.

Direct boxes are also used to interface laptop computers to audio systems, as well as for backing track systems. These have become the norm in live performances that aim to deliver “authentic” renderings of recorded music without having to hire, say, an orchestra, backing vocalists, or a horn section. Advanced multichannel DI boxes will actually provide automatic switching for backing tracks, should the computer crash mid-show.

There are many types of DI boxes to choose from, and quality can vary significantly. While a weekend-warrior musician can make compromises, a professional audio engineer cannot. The pro will look for both sound quality and durability, because if the DI box fails, and suddenly there’s no bass sound, for example, the show comes to a screeching stop. And remember, at the end of the day, a happy artist means a happy crew! 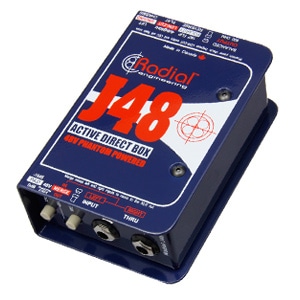 Home Recording: The Most Important Gear You Need

A Radial device can go a long way in the managemen

With the Voco-Loco you can add your favourite dela

See how Guitar IQ uses the Headbone VT on their Ch

The JX 44 and the JX42 are Radial's premium live t

The Bassbone OD recently went through a visual upg

Introducing the new artwork for the Bassbone OD. S

The Radial Pro-DI is a compact, passive DI box tha

True Bypass or Buffers? Which one is better for yo