Does your guitar sound sterile when you connect it to a wireless rig? Do you find that your buffered pedals are butchering your tone? If so, we need to talk about Drag control.

You may find yourself asking: ‘what on earth is Drag control?’. Well, it is not some sort of magical device that will make it any easier for you to drag your heroic stadium rig to a bar gig… However, it can be a game changer for you and your tone. To put it simply: Drag control is a load correction circuit that is designed to restore the optimal loading to your magnetic pickups.

So where did it come from?

Drag control was originally introduced on the venerable Radial JD7 guitar distro as a means to correct the loading down that occurs when a guitar signal passes through a buffer. Many tone purists shy away from using any buffered pedals in their signal chain, and while it’s true that they can make your instrument sound ‘brittle’ or ‘harsh’ in some scenarios, the truth is that they are a necessary tool for most guitarists.

Since guitars have a high-impedance output, you can only run cables a short distance before they begin picking up interference and noise—hence the need for buffers. A common rule of thumb is to keep your cable runs around 20 feet long or less. Should you surpass this magical number, the impedance gods may start rolling off of your high-end frequencies and your guitar will slowly morph into an antenna, subsequently becoming very susceptible to noise.

So you have two options: you can either station yourself by your amp to keep the cabling under 20 feet, or introduce a buffer to your signal flow. 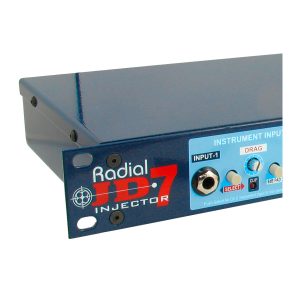 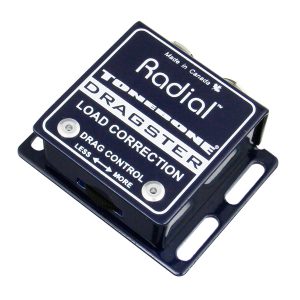 The Dragster is a super-compact device that lets you adjust the load on your electric guitar pickup for a more natural sound through wireless systems.

But what about the bad reputation that buffers have? This bring us back to the topic of Drag control.

When your guitar is connected directly to a tube amp, the amplifier’s input impedance (typically 1meg ohm) reacts with the pickup and this relationship plays a critical role in the overall tone of the instrument and amplifier. Simply put, the load provided to your pickups by this direct connection is optimal. On the contrary, when you connect your guitar to a buffer (or a solid-state amplifier), you are essentially connecting your guitar to a preamp. This means that you just morphed your passive instrument into an active instrument. When this happens, your instrument no longer ‘sees’ your amplifier and its high impedance input. Instead, it is now seeing the altered load from the buffer and herein lies the problem. The net result is that the tone that you have worked so hard to achieve takes the brunt from this broken relationship.

By simply introducing the standalone Dragster or a device augmented with Drag control to your setup, you can re-establish that lost relationship between your guitar and amplifier that has been eradicated by a buffer.

Here’s how it works: Drag control provides a variable load on your magnetic pickups to replicate the sound as if you were connected directly to a tube amp. Starting at 500k ohms when fully clockwise, you can adjust the load all the way up to 22k. You will notice that the more you load down your signal with the Dragster, the warmer your tone will become.

*Note* In order for Drag control to be effective, it must be connected directly to magnetic pickups.

Beyond using Drag control to counteract a buffer, you can warm up the sound of your solid-state amplifier, digital modeler or wireless pack by first going into a Drag control-enabled device. You can even experiment with Drag control in the Reamping process by adjusting the load on your pickups, which may produce a more natural DI sound to your interface.

Some more of our products that contain Drag control include the Twin-City, the Switchbone V2 and Radial SB-15. 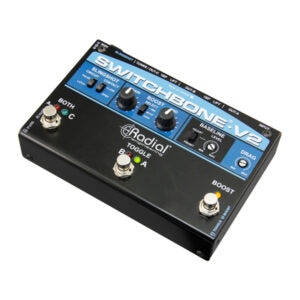 The Switchbone V2 is a feature-packed ABY pedal that also features a third output to allow switching between up to three amplifiers without noise. 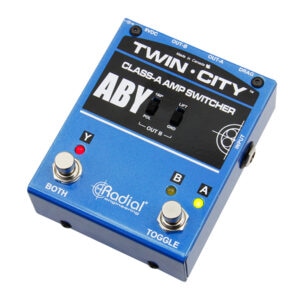 The Twin-City is an active ABY switcher that toggles or combines two guitar amplifiers in phase and without noise, with a class-A input buffer to drive both amps without any loss of gain. 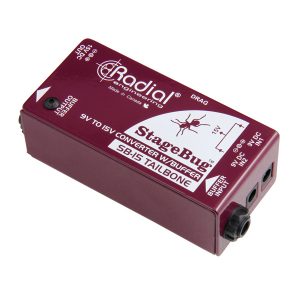